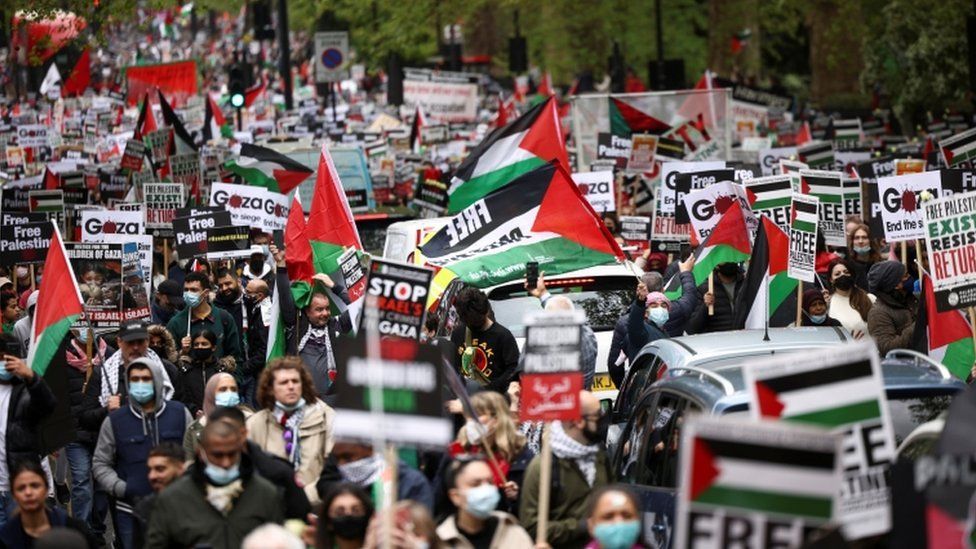 The organisers of the protest called on the UK government to stop allowing what they described as "Israel's brutal violence against and oppression of the Palestinian people".

It comes after the worst week of violence in Gaza and Israel since 2014.

At least 139 people have been killed in Gaza and nine in Israel since the fighting began on Monday.

Israel says dozens of militants are among the dead in Gaza, while Palestinian health officials say nearly half are women and children.

It came after weeks of spiralling Israeli-Palestinian tension in occupied East Jerusalem which culminated in clashes at a holy site revered by both Muslims and Jews. Hamas - the militant Islamist group which rules Gaza - began firing rockets after warning Israel to withdraw from the site, triggering retaliatory air strikes.

On Saturday, an Israeli air strike on a refugee camp in Gaza killed 10 people, while a Palestinian rocket killed a man in Israel.

A separate Israeli strike destroyed a high-rise building housing media organisations, including The Associated Press and Al Jazeera, plus a number of offices and apartments. The Israeli military said the building housed military assets belonging to Hamas.

The demonstration in London has been organised by the Palestine Solidarity Campaign, Friends of Al-Aqsa, Palestinian Forum in Britain, Stop The War Coalition, Campaign for Nuclear Disarmament and the Muslim Association of Britain.

A spokesperson for the organisers said: "It is vital that the UK government takes immediate action.

"It must stop allowing Israel's brutal violence against and oppression of the Palestinian people to go unpunished."

They said the bombardment of Gaza "which is killing civilians including children is a war crime", adding: "The UK government is complicit in these acts as long as it continues to offer Israel military, diplomatic and financial support." 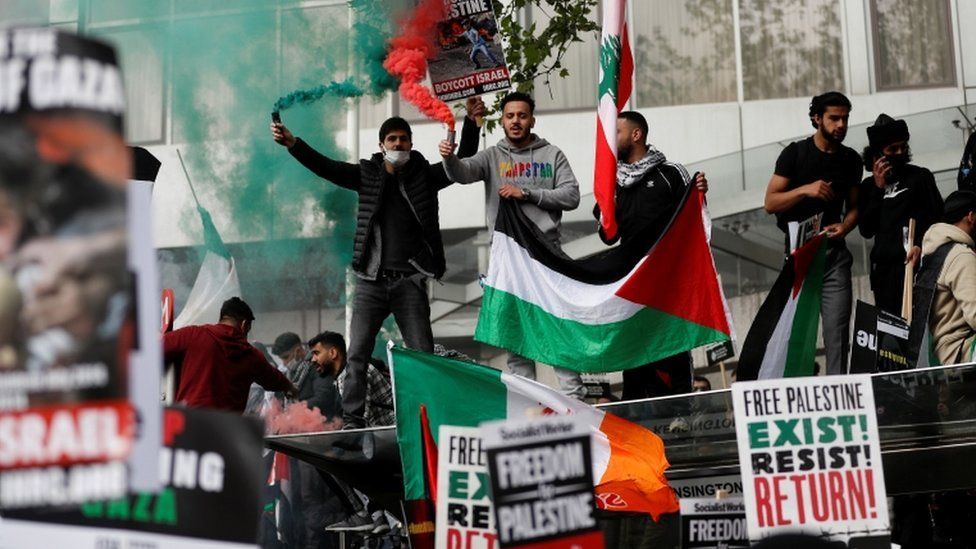 From the outset, it has been clear how high passions are running among the thousands who have turned out in central London.

A river of protesters flows along Hyde Park towards the Israeli embassy in Kensington.

Every once in a while, a red or green smoke flare is set off, which is met with cheers and waving Palestinian flags which match the colours.

Their intended destination is sealed off down a private road, but that does not stop people chanting "free Palestine" and a minority climb scaffolding on Kensington High Street.

They essentially want Israel to stop air strikes and for the UK government to step in.

But as US negotiators call on both sides to calm things, few here think it will be resolved any time soon.

Addressing the crowds at the rally, Husam Zumlot, Palestinian ambassador to the UK, said: "This time is different. This time we will not be denied any more. We are united. We have had enough of oppression.

"Today we are saying enough, enough with the complicity. Thank you for standing with us."

Ms Abbott said: "We must remember we are part of an international movement. This is a worldwide movement for justice.

"Palestinian people are having their land seized... and they are now being killed in their homes. All of this is illegal."

The Twitter account of Israel's embassy in the UK posted a tweet that read: "Hamas couldn't care less about the lives of Palestinians, in its desperate attempt to terrorize and kill Israelis."

In a BBC interview, the former Israeli ambassador to the UK, Mark Regev, defended Israel's actions in Gaza.

"But Hamas says Israel has no right to exist. So, we're only talking about deterrence, about strength, about them understanding that it's not in their interest to shoot rockets into Israel," he added.

"And we want to come out of this conflict with them understanding that clearly, and then have a sustained period of quiet. Ultimately, that's good for Israelis, and that's good for the residents of Gaza, too."

A Foreign Office spokeswoman said the ongoing violence was "deeply concerning and must end".

"There is never any justification for targeting innocent civilians. Both sides need to de-escalate and offer hope to their peoples, which can only come through political dialogue."

The Metropolitan Police said a small minority of protesters had thrown objects of police, and warned that enforcement action "will be taken where necessary against those who breach Covid regulations".

There have also been pro-Palestinian demonstrations in several other European capitals.

In Paris, riot police used water cannons and tear gas to disperse a rally held despite a ban by authorities.