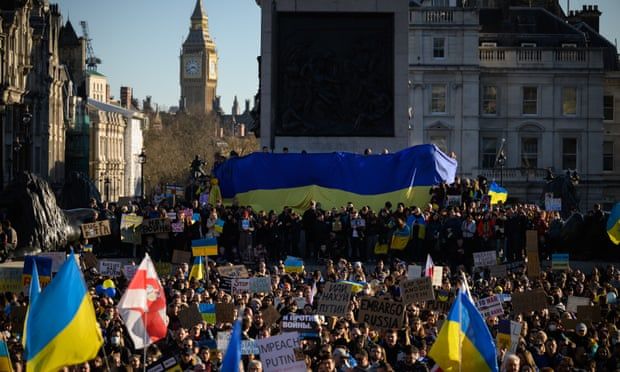 Thousands gather in cities across the UK in support of Ukraine

Thousands of people gathered in cities across the UK for at times highly emotional rallies in support of Ukraine as the country defended itself against the brutal Russian invasion.

In London, Trafalgar Square was a sea of blue and yellow as protesters voiced anguish and despair at Russian president Vladimir Putin’s assault on the eastern European country. 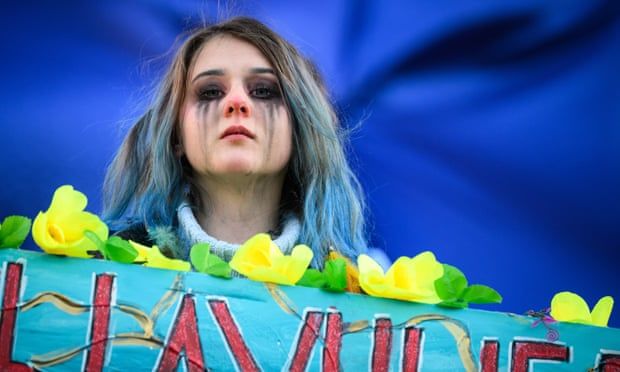 A protester in Trafalgar Square.

In central London, thousands of Ukrainians waved their national flag, displayed anti-Putin placards and chanted slogans including “Stop Putin, stop the war” and “Shelter our sky”, in reference to calls for a no-fly zone. One sign read “Shelter our sky – we will take care of the rest.”

Olena Marcyniuk, who lived in Ukraine until she was 14, attended the Trafalgar Square rally with her baby son William and made a desperate plea for Russians to take a stand against Putin. 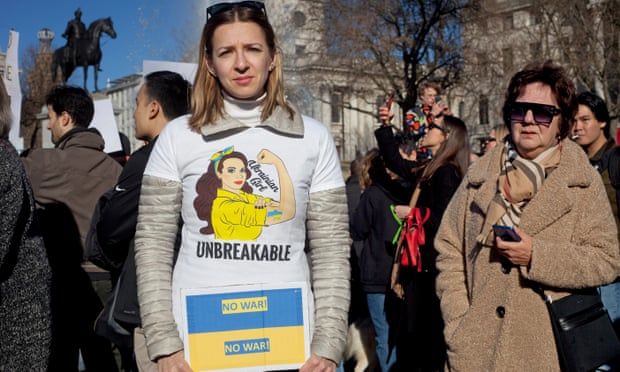 She added: “The freedom we got from independence, we thought it was for ever. We thought, ‘Finally, it is here to stay,’ and we never expected this from Russia. I’m so glad my grandparents are dead, because this would have killed them on the spot.”

Ekaterina, who did not want to give her last name, told the Guardian her family is split between living in Ukraine and Russia. She brought her dog, Mabel, along to the solidarity event and said her Ukrainian family was safe but “very scared” by the Russian invasion. 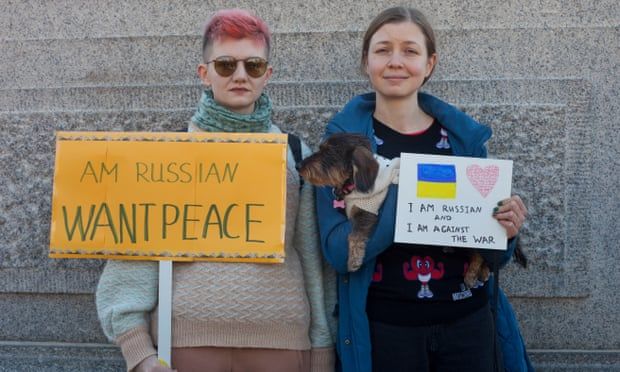 Ekaterina Ageeva and Ekaterina, who did not want to give her last name, with her dog Mabel.

“I don’t know anyone in Russia who supports this war,” she said. “I lived there my entire life, apart from these past three years, and none of my friends or relatives, people I went to university with or worked with, nobody supports this.”

Alexandry Gosuliac, draped in a Ukrainian flag, said he speaks to his family back in Ukraine “every day” and expressed pride that his country’s army had “already shown the world what we can do”. 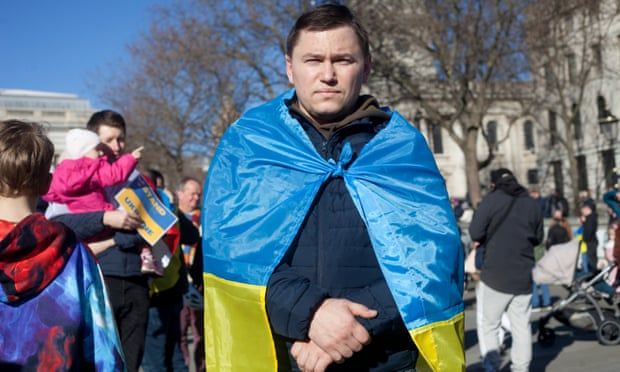 Snezhana and Alex, who did not want to give their last names, live in the UK but are originally from Belarus. They said they fear Putin will continue his military campaign beyond Ukraine and into other European countries. 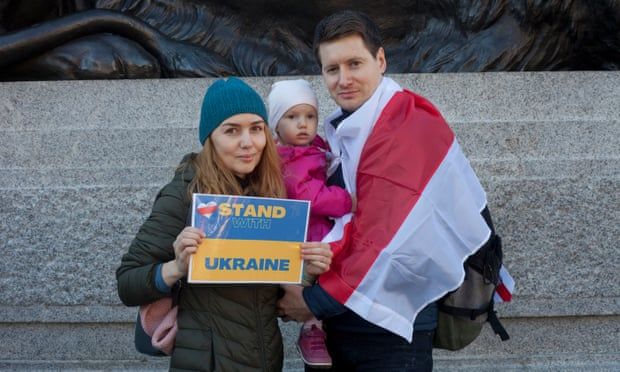 Snezhana and Alex with their child.

Snezhana, whose extended family still lives in Belarus, said: “We are sickened, overwhelmed and extremely frustrated with the whole situation and, as Belarusians who have been suffering for a very long time … when we heard about the attacks, we were absolutely shocked and felt we need to do something.

“We have been supporting the army and trying to donate. Also, supporting our friends and giving information. We are here to try to let the world know what’s happening.”

In Newcastle, 47-year-old Marek Bidwell, an environmental consultant, decided to stand in solidarity with Ukraine. He said he is a quarter Polish and his grandfather escaped from a Nazi prisoner of war camp. “When I was young, I have memories of us sending food parcels to my relatives in Poland because they were so poor. They were badly treated by the Russians who occupied Poland, so I do feel solidarity with Ukrainians.” 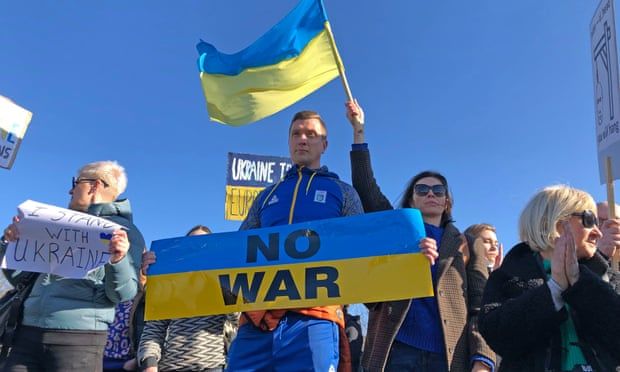 People demonstrate from the Russian consulate in Edinburgh to the Scottish Parliament building to call for more support for Ukraine.

Edinburgh West MP Christine Jardine was among those taking part in a protest in the Scottish capital, which is twinned with Ukraine’s capital Kyiv, where some of the fiercest attacks have been.

She said: “All over Europe people are sending the clearest of messages to the Russian government, to Putin, to say this is not acceptable.”