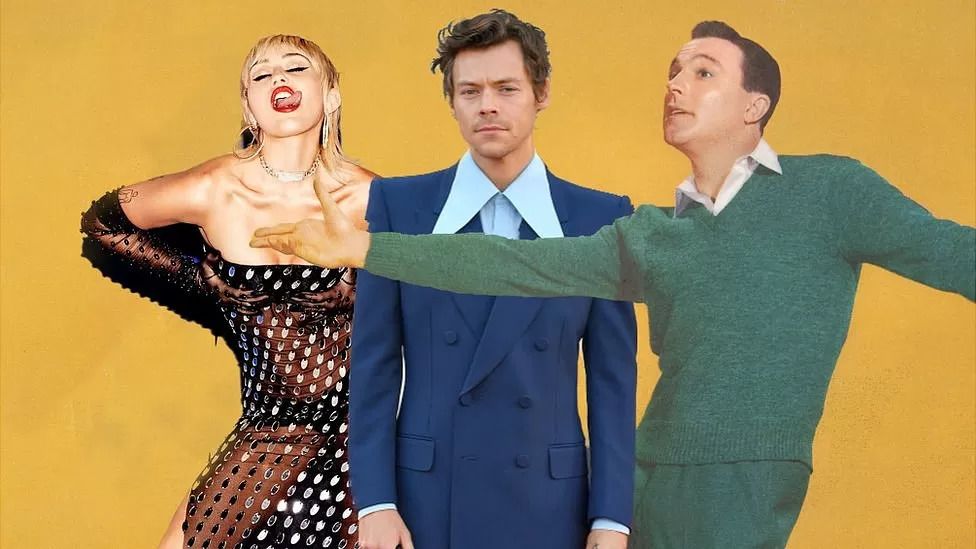 What do Gene Kelly's Singin' In The Rain and The Notorious B.I.G.'s rap anthem Juicy have in common?

No, it's not an infectious joie de vivre, or copious references to recreational drug use.

Instead, they are the UK's most-streamed songs from the calendar year in which they were released.

That's according to the Official Chart Company, who have identified the biggest streaming hit for every year since the chart's inception in 1952.

Their findings will be broadcast on BBC Radio 1 and Radio 2 next weekend, marking 70 years of the UK singles chart.

The list features superstars from Elvis and the Beatles to Adele and Harry Styles - alongside several songs that were overlooked on release, only to be reclaimed as classics over time.

They include San Francisco rock band Journey, whose single Don't Stop Believin' stalled at number 62 in 1981, but subsequently became a rock standard, thanks to its inclusion in TV shows like The Sopranos and Glee.

It is now the most-streamed song of that year, overtaking contemporary hits like Come On Eileen (the UK's biggest-selling record of 1982) and Survivor's Eye Of The Tiger.

Ray Charles' I Got A Woman has enjoyed a similar second-life after being interpolated in Kanye West's 2005 hit Gold Digger. The track is now the most-played hit of 1954, and has been certified silver (representing 200,000 sales) on streams alone.

By contrast, some of the biggest songs of their era are entirely absent from the Official Charts' list.

Bryan Adams' Everything I Do (I Do It For You) spent 16 consecutive weeks at number one in 1991 - an all-time chart record - but Nirvana's Smells Like Teen Spirit is now more popular with streaming fans.

Other entries are more predictable.

The Killers' Mr Brightside, which has spent an unprecedented 338 weeks on the UK singles chart, is the most-played song of 2003 respectively. And streaming behemoth Ed Sheeran appears in the list three times - for Thinking Out Loud (2014), Shape Of You (2017) and Bad Habits (2021).

The Beatles' sole entry, Here Comes The Sun, was never released as a single in the UK.

Christmas songs have been excluded from the countdown.

The full chart will be broadcast decade by decade on BBC Radio 1 and Radio 2 on 11 and 12 November, with guest hosts including Tony Blackburn, Johnnie Walker, Fearne Cotton and Jack Saunders.

The special programmes are also available to stream now on BBC Sounds.

"It's particularly fascinating to see which classic songs from the past are rated by today's music consumers, and how that appeal can be driven by exposure on TV, adverts and social media," said Robert Gallacher, commissioning editor at BBC Radio.

"This chart is a true testament to the timelessness of brilliant pop music."

You can browse the full countdown below.

1987 - I Wanna Dance With Somebody by Whitney Houston

1997 - Bitter Sweet Symphony by The Verve

2000 - Dancing In The Moonlight by Toploader

2018 - Someone You Loved by Lewis Capaldi