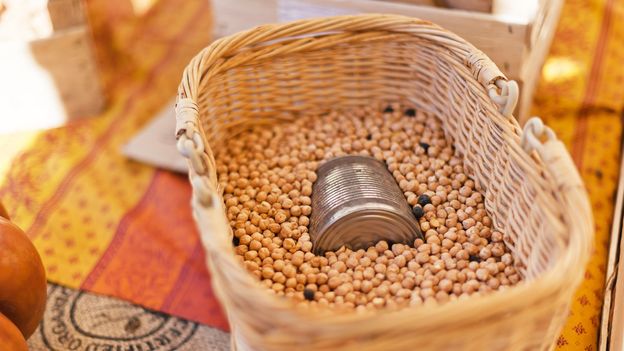 The star legume of southern France

Good for the Earth and our health at a time when plant-based alternatives are moving mainstream, it's easy to appreciate the growing popularity of the unassuming chickpea.

Over the last 12 months, seven tonnes of chickpeas have passed through Nadia Sammut's kitchen in southern France. The protein-packed legume has been milled into flour and kneaded into bread, pulsed into milk and chilled as ice-cream, and even fermented into a miso-like paste. She has separated its skins to be used in muesli and played with the binding qualities of its reserved cooking water as an alternative to eggs in desserts such as chocolate mousse and sauces like mayonnaise.

"I like the taste, so I work the chickpea in all its forms," she said.

As the third generation of celebrated female chefs at L'Auberge La Fenière, her family's seven-and-a-half hectare estate on the edge of Lourmarin, a postcard-pretty village in the Luberon region of Provence, Sammut's ascent through the French culinary world was predetermined. Yet born celiac and lactose intolerant, food was something she long associated with pain rather than pleasure. When the time came for her to take her place as head chef in 2015, Sammut brought with her a commitment to locally sourced, natural ingredients and a menu free from allergens. 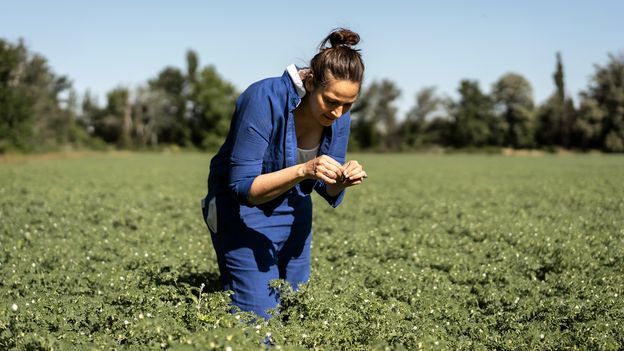 In 2018, La Fenière was awarded a Michelin star under Sammut's direction, becoming the only gluten-free restaurant in the world to receive such an accolade (the restaurant earned a first star in 1995, when Sammut's mother Reine was head chef). An advocate for what she terms "cuisine libre", or "free cuisine" — her philosophy of inclusion, she is also the co-founder of Kom & Sal, a gluten and lactose-free bakery and patisserie brand based in the nearby centre of Cavaillon and distributed to organic shops in the region. Across all her ventures, the chickpea is a staple ingredient, with Sammut estimating that it appears in 50% of her recipes. "It is as principal an element in my cuisine as olive oil."

The chickpea has long held an important place in southern French cuisine, especially in Nice, France's fifth-largest city located just over 200km east of Lourmarin. Culinary historian Alex Benvenuto notes that records first make mention of lou cèe, as the chickpea is known in the local dialect Niçois, in the Middle Ages. Widely acknowledged as having originated in Turkey, the legume thrives in the Mediterranean basin and is one of the few crops capable of growing in the poor and water-deprived soil of France's meridional coastline. 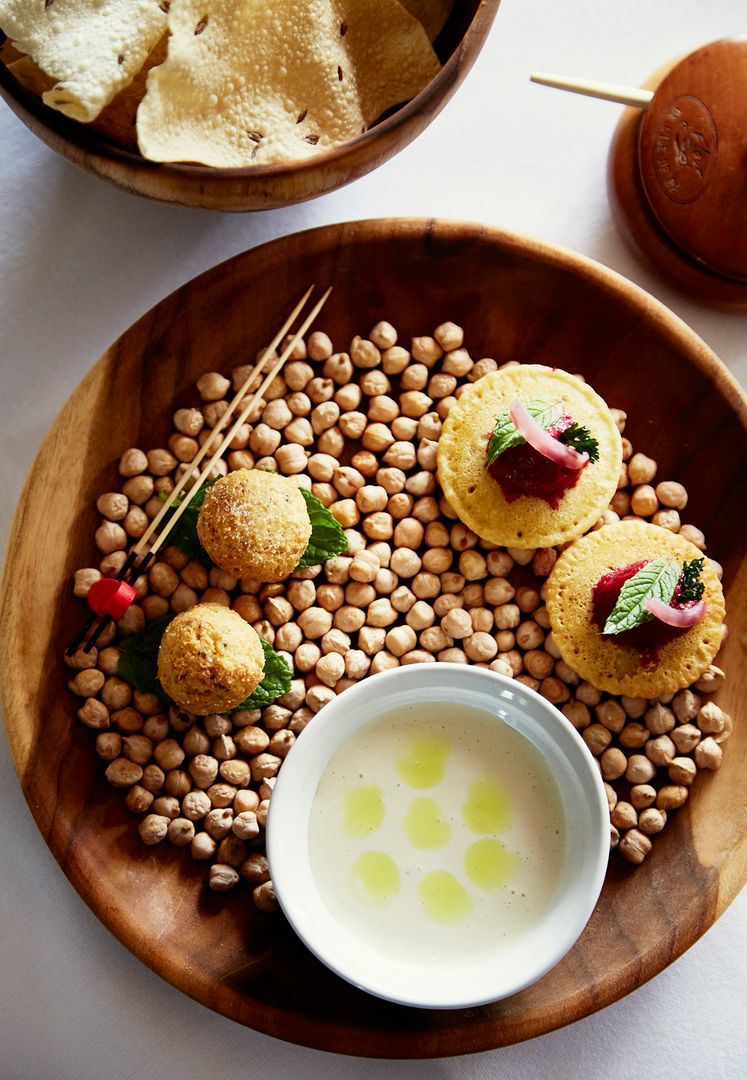 The chickpea appears in about 50% of Nadia Sammut's recipes

"Chickpeas corresponded to a simple cuisine, or one that relied entirely on locally grown products," Benvenuto said. "But it is not simplistic cuisine, as it is elaborate and respectful of flavours."

Typically, the legume is used in one of two ways across southeast France: firstly whole, especially in salads and dishes such as le grand aioli, where it is served alongside other regional flavours including cod, eggs, potatoes and green beans. It also has a place in religious celebrations: on All Saint's Day (1 November), many Niçois families come together to eat la salada de cée à la ceha (recipe below), or chickpea and onion salad, followed by la soupa de cée, or chickpea soup, on All Souls Day (2 November).

Grinding the chickpea into flour is the second common use: combined with water, olive oil and a pinch of salt, chickpea flour forms the base ingredient in socca, a large savoury pancake and classic Niçois street food snack. The recipe may seem simple, requiring the marriage of only a handful of ingredients, but it's one that is "difficult to get right", according to Sophie Budoia, who, along with her husband Jean-Luc, is the current owner of Chez Theresa, a restaurant in the narrow pedestrianised streets of the city's old town that has been serving up local specialities since 1925.

"True socca is made in a woodfire oven," she said. Her oven dates from 1870 when the site was a bakery, and is one of only three in the city used for the dish today. The batter is poured onto a piping-hot, round cast-iron pan, then cooked for 10 minutes. "You need to master the fire in order to master the temperature," Budoia said. The choice of wood is crucial: "We use hornbeam and beech for the heat and flames they both produce." 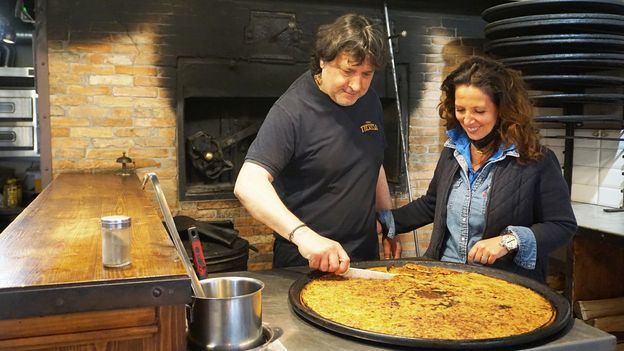 At Nice's Chez Theresa, socca batter is poured onto a piping-hot pan, then cooked for 10 minutes

A handful of other closely guarded secrets are what makes Budoia's socca so popular with both locals and tourists but, she said, they will remain just that. On a busy summer day, the couple can make 30 or more 70cm-wide trays of socca, the majority transported fresh on a customised trishaw to their stand a few streets away along the busy Cours Saleya produce markets.

Benvenuto explains that the best examples of socca are just millimetres thick and crispy, two characteristics that distinguish it from regional equivalents found further west along the coast. In Toulon, for example, cade is a thicker and gooier relation; while in Marseille, panisse is a saucer-sized disc that can be cut into French fry-like slices and fried, baked in the oven or even sweetened and eaten as a dessert. Both were introduced to their respective cities by migrating Niçois, according to Benvenuto's research; in fact, you can still find panisse in some of Nice's specialty food shops today. 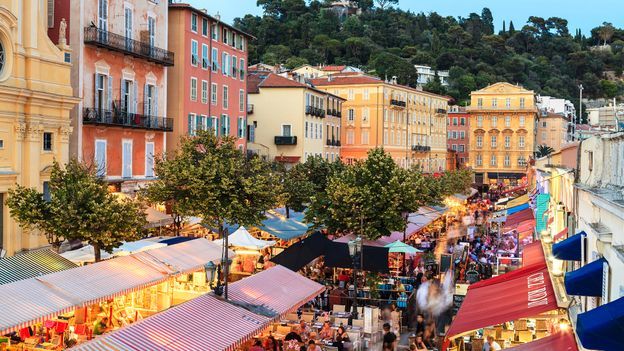 The chickpea has long held an important place in southern French cuisine, especially in Nice

Although versions of socca exist around the world, from farinata found across the Italian border in Liguria to Algeria's karantika, Benvenuto believes that a key difference is that, in Nice, socca is a dish that is intertwined with the city's identity. "It's part of our patrimony," Budoia agreed. This importance was cemented in 2017 when the word "socca" made its first appearance in France's Larousse dictionary.

Beyond its place in the kitchens of the region, the chickpea is also undergoing a renaissance in the farms of Provence, in particular the lavender-scented plains of the Vaucluse region. "It's a crop that is on the increase," said Felix Droin, one of a growing number of farmers cultivating the legume. Six years ago, he turned his back on the corporate nine-to-five life in Marseille to return home to restart the farm where he grew up in Venasque, a village perched atop a rocky outcrop at the foot of the dominant Mont-Ventoux. Rechristened Le Jardin de Nos Grand-Mères (Our Grandmothers' Garden), the six-hectare property is organically certified across all its practices.

Along with spelt and certain aromatic plants such as lavender, chickpeas are one of the few crops that will take to Droins's soil, a dense, compacted, light brown clay-limestone that he describes as "difficult". Like other legumes, chickpeas also improve soil health by enriching it with nitrogen drawn from the atmosphere. Droin's growing season starts in late April and finishes at the end of August or the beginning of September, depending on the weather. "The pods have to be dry," he said. Every last grain of his annual harvest, which fluctuates between one and a half and three tonnes, is treasured, transformed into homemade falafels, tubs of hummus, fresh pannisses and vegetarian burgers to be served at his open-air restaurant, Plein Air – Restaurant Paysan, or sold at local farmers markets.

Good for the Earth and good for our health, at a time when plant-based alternatives are moving mainstream, it's easy to appreciate the growing popularity of this unassuming legume. For Sammut, who has partnered with an agricultural college in nearby l'Isle-sur-la-Sorgue to ensure a sustainable, locally grown supply, the cultural ties are another incredibly strong pull. 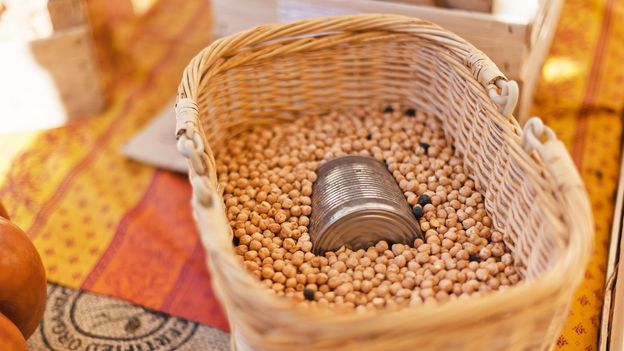 "As I started exploring the possibilities of the chickpea, I realised there was a culinary universe of taste that was already etched in people's memory," she said. "It's an ingredient that plays such a role in our Mediterranean culture and culinary traditions."

Cooking: 30 minutes (plus overnight soaking for the chickpeas)

Soak the chickpeas the day before then cook for 30 minutes in a pressure cooker with the carrot and the slice of rind.

After cooking, drain, then season with olive oil, vinegar, salt and pepper. Add in the diced raw onion.