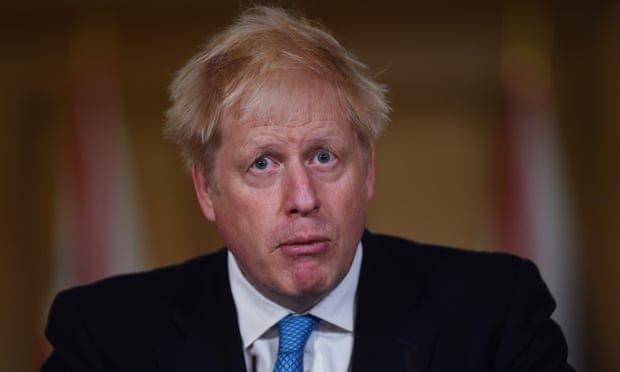 The political consensus about how we should live with the coronavirus has shattered comprehensively. We will be existing alongside this lethal virus for many months to come; the need for national unity in the face of its immense social, financial and health challenges has never been greater.

Yet in the last week the fissures have cracked wide open. Leaders of the devolved nations want to go further than Westminster but feel constrained by a lack of financial support. Keir Starmer has backed calls from the government’s scientific advisers for a national, time-limited lockdown.

And the government is locked in a battle with regional leaders in Greater Manchester – both the Labour mayor and Conservative MPs – over its attempt to impose tougher restrictions without anywhere near the levels of financial support needed to avoid intense hardship.

The country is fragmenting just as it needs to be pulling together and the blame for this can be laid at the feet of the prime minister. Covid-19 has presented the biggest governing challenge in a generation. Yet, at every turn, Boris Johnson has proved weak and incapable. Pulled in various directions by a split cabinet, he is at the helm of a government that has suffered shambolic failures in building a functioning test-and-trace system.

He has failed to take decisive action and has proved unwilling to extend a financial lifeline to the areas of the country suffering most in the second wave. Instead of building a sense of national unity, he has sought to distract from his incompetence by using asylum seekers and antiracism protesters as bait in the culture wars.

There are those who have sought to polarise the debate in recent weeks: to imply there are two options - locking down the country or letting the virus rip to achieve herd immunity; that there is some sort of monumental showdown to be had between the nation’s health and the needs of the economy.

This is not an accurate representation of the choices we face. At the start of the pandemic, the government’s scientific advisers were clear that until there was a vaccine, we would be living through a time of fluctuating social restrictions to control the virus’s spread. The need for these can, however, be minimised through a functioning test, trace and isolate system.

If that fails to prevent widespread transmission, the best option is to act swiftly to dampen the rapid growth of infection rates, to avoid the need for tougher and longer lasting restrictions later.

This is the grim reality we face and it is understandable that people wish it were different. But not acting to suppress the virus is not an option. There is no scientific evidence that population-level immunity to Covid-19 could be achieved by allowing it to spread and public health experts have warned that it would be impossible to adequately shield the 40% of the population that would include those deemed vulnerable and those who care for them.

Failing to impose social restrictions to try to control the virus once infection rates are high and growing will not save the economy, protect people’s mental health or improve survival rates for non-Covid-related conditions. All that will happen is that hospitalisation rates, then death rates, will spiral; the government will be forced into tougher levels of social restrictions and the NHS will have to stop all elective care while it is overwhelmed.

That is not to deny the dilemmas our leaders must resolve. What kind of test-and-trace system best minimises the need for social restrictions in the first place? As we learn more about how the virus spreads, what type of social restrictions are we best able to tolerate and what, such as school closures, must we avoid at all costs? And how can we best alleviate the inevitable economic, educational and wellbeing costs of managing Covid-19? This is a government that has comprehensively failed on all three counts.

It is unlikely that a test-and-trace system could have held off a second wave of the virus altogether, but it could have undoubtedly reduced the level of restrictions required to manage it. Yet the government has failed to build anything approaching a working test, trace and isolate infrastructure.

It ignored early pleas from public health experts to build a system based on the expertise and effectiveness of local public health teams; it instead chose to award multimillion-pound contracts to run mass call centres to companies with a dreadful track record of delivery. Only after months of failures and delays have ministers reconsidered this approach.

Even as it has spent £12bn on an ineffective system, the government has failed to provide those required to self-isolate for 14 days with adequate financial support, meaning many simply cannot afford to do so. The result is a shambles of a system that the government’s scientific advisers conclude is only having a marginal impact on transmission.

In March, the British government was slower to act in introducing social restrictions than many others in Europe; it is likely this contributed to the UK suffering one of the worst Covid death rates in Europe to date. Yet it seems to be repeating the same mistakes in the second wave.

We know that the government’s scientific advisers recommended a combination of social restrictions be introduced in late September, including a two-week national “circuit-breaker” lockdown that would dampen the virus’s growth, giving more time to improve the nation’s test-and-trace infrastructure while it can still make a difference.

Yet Johnson rejected this advice, opting for only one of the proposed measures – reversing the guidance on home working. The government encouraged students to start their university year as usual, despite the warnings that this would lead to university accommodation becoming Covid hotbeds that would lead to wider community transmission, presumably because it did not want to stump up for the fee waivers and financial support that distance learning would require. In doing so it thrust too many young people moving away from home for the first time into intolerable living conditions with little support.

Taking action early to prevent the need for more stringent and painful action later is not easy - it requires asking the public to comply with restrictions that may feel disproportionate. But it is what responsible political leadership demands.

We support calls for a limited circuit-breaker lockdown timed around school holidays to put a break on the virus’s growth; this is now likely to have more impact in areas with lower, but quickly rising infection rates than those where infection rates are already very high and so which will now need stricter, and longer, restrictions.

Also in March, the government introduced generous financial support that went a long way towards protecting jobs. But this is wrapping up just as the second wave is hitting the least affluent parts of the country. The furlough scheme for tier 3 areas is less generous and far too restrictive, limited only to businesses ordered to close.

The result will be widespread job losses, with large numbers of people forced to subsist on frugal out-of-work benefits; according to the Resolution Foundation, if the government proceeds with its planned cut to universal credit next April, unemployment support will be at its lowest real-terms level since1992.

As Gordon Brown argues on our pages this week, we only need look at what happened in the 1980s to see what is about to unfold. When jobs leave a community, so do hope and aspiration. Young people will bear the brunt of this unemployment crisis and their livelihoods and wellbeing will suffer for the rest of their lives. Many more children will grow up hungry, homeless and destitute as intergenerational cycles of poverty set in.

Andy Burnham, the mayor of Greater Manchester, is right to insist on higher levels of financial support to accompany tougher social restrictions in the city; in doing so, he will hopefully ensure those parts of the country without a high-profile mayor but who also face escalating restrictions will benefit.

Throughout this crisis, the government has done far too little to soften its impact on the most vulnerable: on children at risk of abuse or neglect, on older people living with dementia in care homes unable to see their relatives for a lack of testing, on those with mental health issues suffering during lockdown. There can be no excuse for it to leave large swaths of the country out in the cold.

Covid-19 is a crisis like no other. No government will get everything right, but as citizens we have the right to expect our political leaders to learn from their mistakes; to level with us about the tough choices; to show care and compassion for those most at risk. Instead, we have a prime minister who prioritises boosterism over substance, who is prepared to sow discord and disunity if he believes it to be to his political advantage. His appalling legacy will be a more divided and unequal Britain.