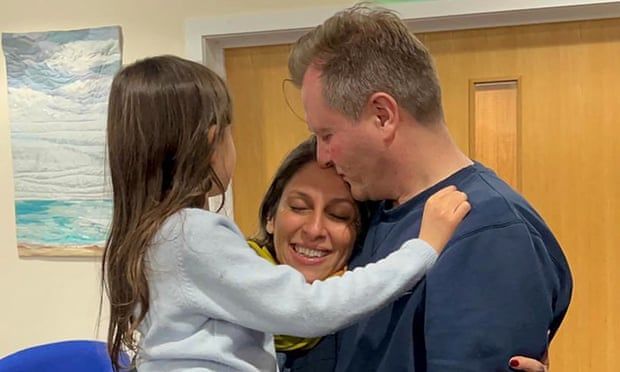 Tea, toys and tidying as Nazanin Zaghari-Ratcliffe reunites with family

Richard Ratcliffe says they are looking forward to a new, normal life after his wife’s long detention in Iran

The parents-in-law of Nazanin Zaghari-Ratcliffe have joked that their son’s home needed to be tidied as it was in an “appalling” state, and said they hoped to see their daughter-in-law at the weekend.

On BBC Breakfast, John Ratcliffe described his son Richard’s home as “appalling”, to which his wife, Barbara, replied: “It is, but if you can think about it, it was a three-bedroom flat when Nazanin got taken and they’d only got a baby in it. Well, that baby’s grown up.”

They said Nazanin, Richard and their daughter, Gabriella, would be staying in accommodation provided by the Foreign Office for a couple of days – their own home is full of campaign material and Gabriella’s toys – before spending time with other family at the weekend.

The following Sunday Gabriella would be able to give her mother a Mother’s Day card for the first time in her life, according to Richard Ratcliffe.

He said their seven-year-old, who does not remember her mother as a free woman, had all her craft equipment ready to start making it. Three years ago he himself laid a card and 155 bunches of flowers – one for each week his wife had been in prison – outside the Iranian embassy in London.

It is a modest ambition for a family forced apart by Nazanin’s wrongful six-year detention in Iran, but Ratcliffe said normal was what the family craved. 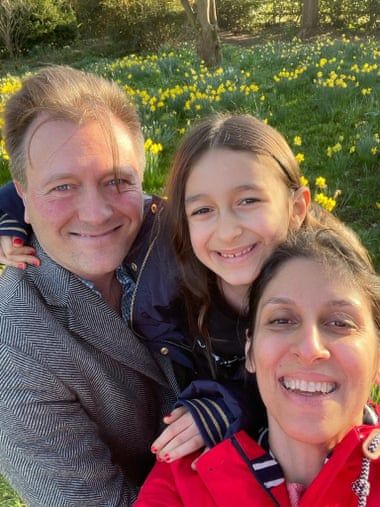 Nazanin Zaghari-Ratcliffe with her husband Richard and daughter Gabriella in their first family selfie since Nazanin’s release.

“We can’t take back the time that’s gone. But we live in the future not the past,” he said. “We’ll take it one day at a time. I think it is going to be the beginning of a new life, a normal life and hopefully a happy family, with all the bumps and all the normal squabbles we had before.”

He said the first thing Nazanin had said she wanted him to do for her on her return home was to make her a cup of tea. “So we will do that,” he said, adding that as she drank it, she could supervise a bit of tidying up around their flat. “I think, actually, we were looking at the house and it needs a bit of tidying, so there might be a bit of tidying, perhaps directed by mummy.”

Clearly lurking at the back of his mind, however, was awareness that normal life is not a simple thing to recapture after the extraordinary experiences that the family have endured.

“We’re both in our own way a bit battered, and that won’t play out today but it will manifest in different ways,” he said. “I’m not dwelling on that now, but it lurks at the back of your mind after six years apart: ‘How long will it take to really get back to normal?’”
Gabriella, however, seemed to have clear ideas how to reintroduce her mother to her life.

Ratcliffe said she had picked out which toys to take to show her mother when her plane landed, and wanted to play the piano for her and show off her craft equipment. “She wanted to show her mummy the things she can do now that she couldn’t before,” he said.

According to Nazanin’s sister-in-law, Rebecca Ratcliffe, Gabriella spent Wednesday night sleeping between her parents in the safe house the family have been taken to for a couple of days to give them a chance to adjust.

“It’s difficult for [Gabriella] to comprehend,” Rebecca told ITV. “It’s something she’s wanted for a long time but probably doesn’t know how to cope with. I just heard from Richard that [Gabriella] slept in the bed between them all last night. That’s a really special moment for all three of them.”