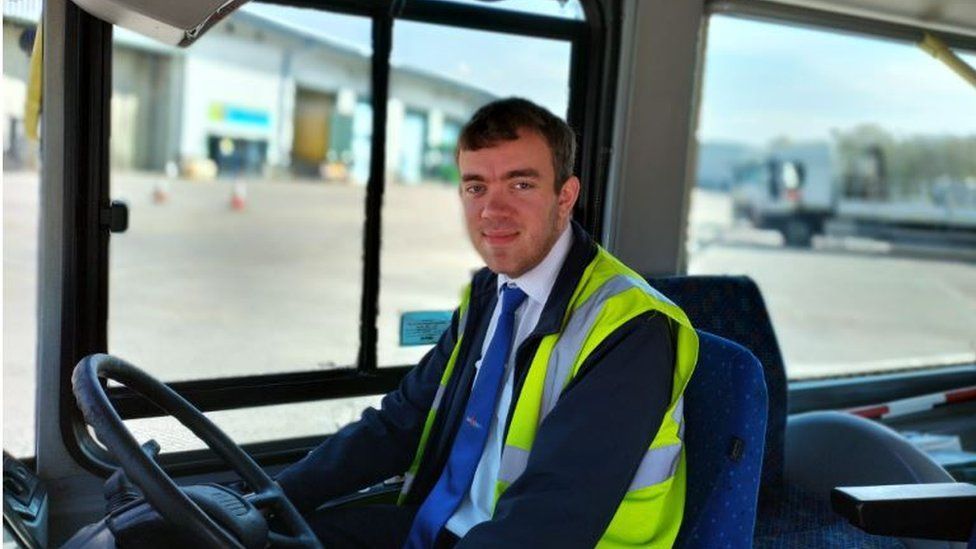 A bus driver has been praised for helping a woman and her three children flee from an abusive man in the area.

Kyle Caswell, 18, from Swindon, said he was at the end of his route when he was stopped by a woman and her children.

He said the woman told him she had been trying to avoid an abusive ex-partner who was nearby and looking for her.

Mr Caswell obtained permission from his supervisor to take them to a safer location across town and Swindon Bus Company said it was very proud of him.

"I was just about to finish my shift and a woman and her three children ran over to my bus, I just thought they were running so they didn't miss it," Mr Caswell said.

"As they got on, I found out the lady's ex-boyfriend was in the area and that he was quite violent and trying to get to her.

"She was visibly upset.

"We carried on the route but at this point I was at the end of the journey and was going back to the bus depot."

After speaking to the woman about her situation, Mr Caswell, who had only been driving buses for six months, said he did not feel comfortable leaving them.

"I deemed it unsafe to leave her there with her three children because we weren't far from where she got on," he said.

He decided to ring his supervisor and received permission to go off-route and drop them at a relative's home on the other side of Swindon.

"My supervisor was very supportive, he said he'd back me all the way, and said just make sure she is safe," he added.

"She was very surprised but extremely thankful, she just kept saying thank you so much.

"I was really glad to help her and I would do the same to anyone on my bus, as long I can make sure they're safe, that's my job done."

Since the event a few weeks ago Mr Caswell has been widely praised for his act of kindness.

Swindon Bus Company operations manager Paul Coyne said: "We are all very proud of Kyle. He acted with maturity and humility.

"At Swindon's Bus Company, we know we have excellent drivers, but we also look for the ability to provide great customer service when we recruit new colleagues.

"Kyle is the epitome of that, and he is very worthy of the praise he has received."

South Swindon MP Robert Buckland also praised Mr Caswell and said it was people like him who "make our community here in Swindon a better and safer place".

Supt Ben Mant, from Wiltshire Police's public protection unit, said he applauded Mr Caswell's "public-spirited actions" and urged anyone who was a victim of domestic abuse to contact the force.