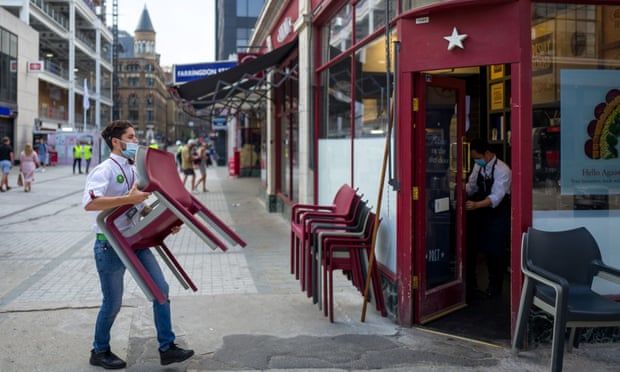 Pret boss ‘optimistic’ as sandwich and coffee chain reports a 15% rise in sales, a return almost to pre-pandemic levels
Figures suggest that workers started to return to city centre desks last week, with Pret a Manger hailing a comeback for takeaway sandwiches and coffee.

With some firms offering free food and gifts to tempt staff back, one barometer of activity around central London offices recorded an increase of almost 5%.

Data experts Springboard said that between Tuesday and Friday, footfall was 4.9% up on the previous week, based on its London office block tracker. Comparisons for the first full week back at work since school holidays ended in England are distorted by the August bank holiday.

Pret became a poster child for the turmoil caused by the Covid-19 pandemic as travel restrictions and home working emptied shops that had deliberately been sited close to offices and train stations to serve commuters. At the height of the crisis, the chain was forced to cut thousands of jobs and permanently close some outlets.

But Pano Christou, the chief executive of the sandwich and coffee chain, said in a weekend interview that he was feeling optimistic about trading in city centres after employees returning to offices last week drove a rise in sales of 15% in just seven days.

The first full week after the school holidays had been the “acid test” to gauge the scale of workers returning to areas such as the City of London after a switch to remote working, he told the Mail on Sunday.

Christou said sales at his sandwich shops in city centres had now returned to about 80% of pre-pandemic levels. He had also seen a “significant step up” at Pret’s airport shops after travel restrictions for vaccinated passengers were eased.

“Things have really continued to build since ‘freedom day’ in July,” he said. “We are optimistic and confident this demand will continue to build throughout the rest of the year.”

The first signs of a commuter revival in the capital appeared last Monday as London Underground recorded its busiest morning since the start of the pandemic – although analysts said schools may have played a bigger role than offices in increasing journeys. There was also a spike in rush-hour trips on the tube and bus journeys.

Diane Wehrle, Springboard’s insights director, said footfall around offices in central London was noticeably stronger than for the previous week but had “tailed off” as the week progressed. While Tuesday’s footfall was 15.6% higher than the previous week, by Friday the weekly comparison was a decline of almost 2%. This suggested employees “shifted back to working from home in advance of the weekend”.

Looking at data for the UK as a whole in what was regarded as the first week when employees would gravitate back to their offices, Springboard said footfall remained one-fifth below 2019 levels but was up by about the same amount on 2020’s reading.
#COVID-19  #Covid
Add Comment