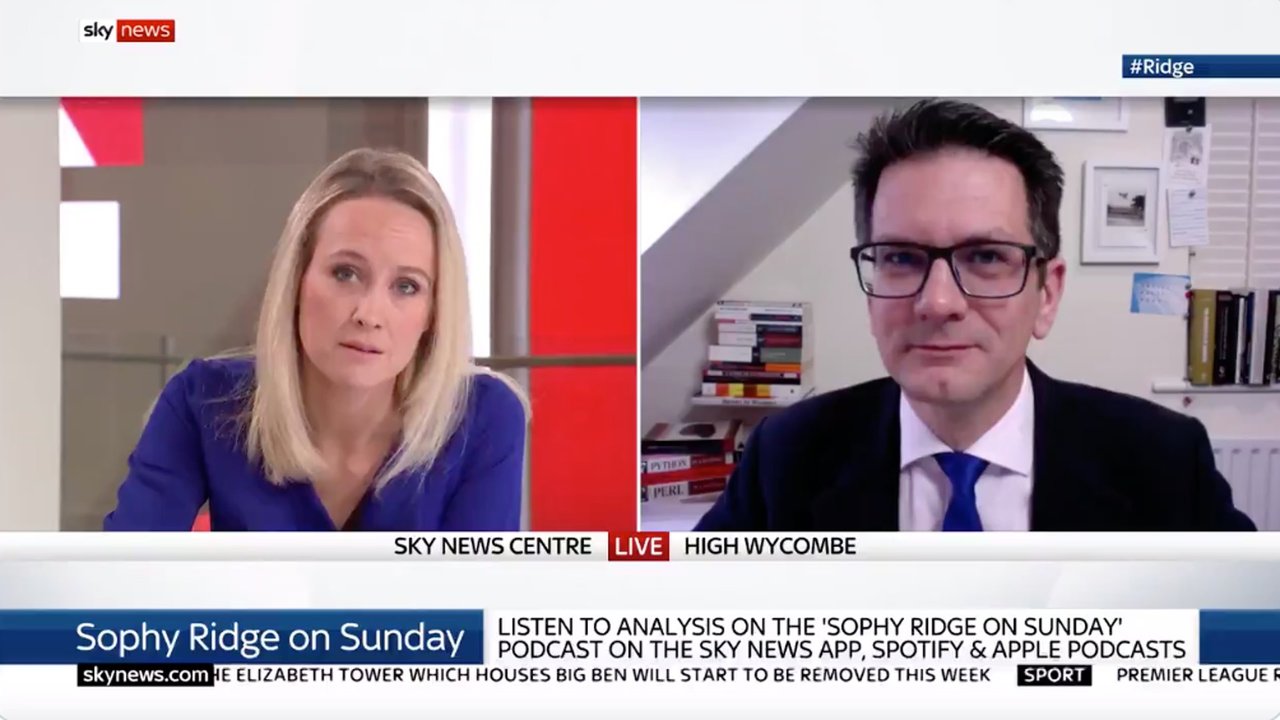 Steve Baker - Liberty 'dies like this' with 'draconian powers' unchecked

The government has come under fire from its own side this morning as it prepares to renew the Coronavirus Act six months after it was first put into effect. Graham Brady, the chair of the influential 1922 Committee of Conservative backbenchers, is spearheading an amendment to the act which would ensure that Parliament could vote on the emergency measures that ministers wish to take. Steve Baker, the former Brexit minister, gave his reasons for supporting this amendment:

"Liberty...dies like this, with government exercising draconian powers without parliamentary scrutiny in advance," says @SteveBakerHW

He accuses the government of "undermining the rule of law by having a shifting blanket of rules no one can understand".#Ridge pic.twitter.com/Mbw3XHPWoT

SB: I doubt really anyone understands what [the] law is... We're in an environment where you really can't know whether you're a criminal or not with this much law... Liberty...dies like this, with government exercising draconian powers without parliamentary scrutiny in advance.

'Plenty of MPs' will back our amendment

Baker continued by saying that he was confident that the amendment had enough support on the Conservative benches to pass, if the other opposition parties joined forces with them:

“There are plenty of MPs who would vote for this amendment if it is selected.”

Conservative MP @SteveBakerHW says MPs feel “increasingly helpless” and is calling for members of parliament to be able to ‘share the burden’ of decision making.#Ridge https://t.co/Ags3OvGNKR pic.twitter.com/KZGLUaKpmR

SB: There are plenty of MPs who would vote for this amendment if it is selected... It's really down to Labour, the SNP and the Liberal Democrats if it comes to it... Let's have policy which enjoys our consent.

Ridge asked Baker about the rumours that the longstanding former editor of the Daily Mail, Paul Dacre, was being strongly considered as the new chairman of Ofcom, the arms length overseer and regulator for television and other media industries. Baker gave his vote of confidence not only to Dacre, but also to the possibility of the Spectator's own Charles Moore as the new Chairman of the BBC:

Is Paul Dacre an appointment you would welcome for the job of Ofcom Chairman?@SteveBakerHW says he would be “delighted” to see the former editor of Daily Mail appointed Chairman of Ofcom 'because he is a Conservative'.#Ridge https://t.co/Ags3OvGNKR pic.twitter.com/lYgScTDRrw

SB: I'd be delighted... They're Conservatives, and they might actually start to look at the way that the media functions and ensure there's some impartiality... I forward to them being appointed.

David Lammy - Students have been 'done over' by the government

The government also attracted criticism from the Shadow Justice Secretary David Lammy over the plight faced by this year's batch of university students. Lammy told Andrew Marr that the Education Secretary had a lot of questions to answer:

Students have been "done over on their A-levels” and the government is threatening to "lock them up" at university says Shadow Justice Secretary David Lammy #Marr #coronavirus https://t.co/hQqxpz1Gig pic.twitter.com/BqAuv8rukZ

DL: Students have been done over on their A Levels, they've been done over on Fresher's Week. The government's now threatening to lock them up at university, and... we may be looking at long term youth unemployment... Gavin Williamson needs to come to the House tomorrow and explain what he's going to do to make sure that our young people can receive their education.

The Culture Secretary Oliver Dowden defended the government's drive to get students back to university despite the high number of restrictions that have been imposed on them, including the reality of many having to take lectures online only. Dowden said that it was important to ensure that university courses continued throughout the pandemic:

OD: In respect of universities, young people have paid a huge price during this crisis... It's important for students not to have to give up a year of their life by not going to university, and they are going to university and paying the fees accordingly.

'I want students to be able to go home for Christmas'

Dowden was non-committal about the likelihood of students being able to return to spend the Christmas holidays with their families, suggesting that this would hinge strongly on the UK's ability to suppress the virus in the coming months:

Should university students be allowed to go home in the holidays?@OliverDowden says he “very much wants students to home at Christmas” and that it “should be possible” if everyone follows the government’s measures.#Ridge https://t.co/Ags3OvGNKR pic.twitter.com/AEJARL5ELN

OD: Of course, I very much want students to be able to go home at Christmas, and if we all pull together and observe these new rules... then we will be able to get to a point where that should be possible... I'd rather Labour was urging everyone to work together to achieve this outcome.

We're looking for a 'strong, big person' to oversee the BBC

Ridge questioned Dowden about Charles Moore's candidacy for the role of BBC Chairman. It is thought that Moore is the preferred choice of the Prime Minister, but Dowden stressed that a decision had not yet been made:

The government is "looking for a strong, big person who can hold the BBC to account" on impartiality, future changes and ensuring it represents more than "narrow metropolitan areas" says @OliverDowden when asked if Charles Moore is his first choice for BBC chairman.#Ridge pic.twitter.com/Dg9fmsfiaF

Dowden also told Ridge that it was the government's preference that Ofcom should be given the powers to address internet safety for young people, especially to tackle online bullying or radicalisation, and to hold the relevant online companies to account:

Is it time for Ofcom to have greater powers to regulate online companies?@OliverDowden says “we need to protect the most vulnerable” when comes to online harm and that Ofcom would be the government's preferred regulator.#Ridge https://t.co/Ags3OvGNKR pic.twitter.com/gk0Wjf90R9

OD: This is a very important area of government policy. At a time when we've seen how reliant we are on online... we need to ensure that we... protect the most vulnerable... Ofcom is our preferred regulator and we'll make that decision shortly.

Ridge asked Dowden about the plight of football clubs, which the government has mandated will not be able to see any supporters taking their seats at the grounds, however socially distanced they may be. With many smaller clubs in jeopardy as a result, Dowden said that help from the larger clubs could be on its way:

“Nobody could be more disappointed than me that we weren’t able to go ahead with fans back into stadiums.”@OliverDowden says “the Premier League needs step up to the plate” and help support lower league football clubs.#Ridge https://t.co/Ags3OvGNKR pic.twitter.com/uyuBvMZA5R

OD: We have said we stand ready to support clubs... The first thing we need to look to is the Premier League... They're having intensive discussions with the EFL about how they can support those clubs, so they stand ready to play their part.

Labour's Shadow Culture Secretary Jo Stevens criticised the government's messaging on Covid-19 after the revelation from a study by King's College London that fewer than 20% of people with symptoms of the virus opted to self-isolate:

“Part of the reason why we are not seeing high levels of compliance comes back to the lack of communication from the government.”

JS: Part of the reason we're not seeing high levels of compliance comes back to the lack of clear communication from the government... It is very confusing. There are lots of people telling me every week... that people aren't clear about what they are not, and they are, allowed to do.

The Director-General of the CBI Carolyn Fairbairn told Ridge that while she understood the reasons for the government's latest wave of virus-related restrictions, the impact was taking its toll the on businesses up and down the country:

How concerned are you that local lockdowns could jeopardise the economic recovery?

CF: The hospitality restrictions, the 10pm curfew, these are all hitting businesses really, really hard. And the instruction for office workers to work from home where they can, that is really affecting our city centres, and the small businesses that depend on the hustle and bustle.

And finally, Professor Mark Woolhouse of the University of Edinburgh told Marr that he felt that the government had prioritised a lockdown without fully considering the alternatives, and that the current wave of restrictions was a direct result of that:

#Marr: Did the government model anything other than a lockdown?

AM: Did the government model anything other than a lockdown, right at the start?

MW: Basically, no. And that is a worry because when we started modelling this way back in March... it was very apparent... that all a lockdown ever did was defer the problem... It doesn't actually solve the problem in the long term, it doesn't make the virus go away.