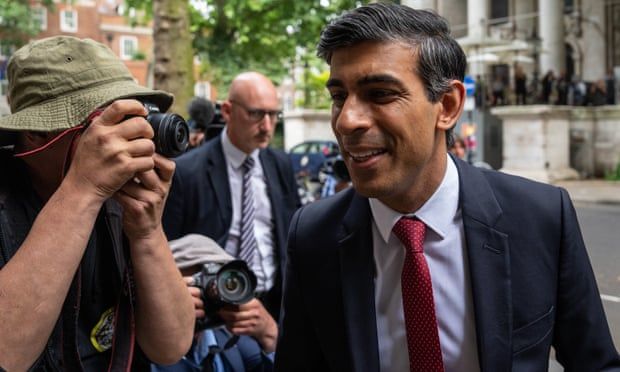 Sunak would not cut taxes before autumn 2023, in clear divide with Truss

Former chancellor would delay cuts until inflation under control, while rival has pledged immediate cuts
Rishi Sunak would not cut personal taxes until at least autumn 2023 to avoid fuelling inflation, the Guardian understands.

The position is expected to be a clear dividing line between Sunak and his rival, Liz Truss, who has promised an emergency budget to cut taxes immediately.

Sunak’s pledge to Conservative members will be that it is the most Conservative position to be fiscally responsible and to offer the country sound economic management.

Sunak has previously said he would not cut taxes until inflation was under control, which the source said was unlikely to be before late 2023 – meaning it would be unlikely to take effect before April 2024. His autumn tax plan, devised as chancellor, would give relief to some businesses earlier.

Sunak, who is trailing Truss in polling of members, is said to be concerned that all inflation forecasts have thus far been incorrect, and is highly cautious of promising tax cuts that would further increase inflation.

There are also concerns about the further eye-watering hikes to fuel bills in the months ahead, especially if there are more cutoffs of the Nord Stream gas pipeline from Russia.

Crucially, the former chancellor is said to be deeply worried by Keir Starmer’s attacks on the “fantasy economics” in the Conservative leadership race. The language used by Labour to criticise unfunded spending promises is an echo of the attacks that Tories have long used against Labour – which is now polling ahead on economic credibility.

Former Treasury sources also suggested that tax cuts did not rate particularly highly as a public priority – as opposed to fuel bills or public services – though the principle of tax cuts is totemic among Conservative party members.

Sunak will pitch his campaign as an election-winning return to core values of Conservatism, and say that credibility on the economy will be the most crucial thing to winning the next election.

Truss told BBC Radio 4’s Today programme that she wanted to challenge the orthodoxy on economic growth. “We have had a consensus of the Treasury, of economists, with the Financial Times, with other outlets, peddling a particular type of economic policy for 20 years,” she said.

“It hasn’t delivered growth. People are struggling with the cost of living: it is wrong to be increasing their taxes at a time when it is difficult for them to pay their bills.”

The race will run until the announcement of the new prime minister on 5 September, including multiple hustings and TV debates over the coming weeks.

Despite Truss coming second among MPs, she is the favourite among Conservative party members, according to polling, with Sunak described as the underdog. About 160,000 fee-paying members – half aged over 60, 97% white and a large proportion male and from southern England – will have the chance to vote next month.
Add Comment