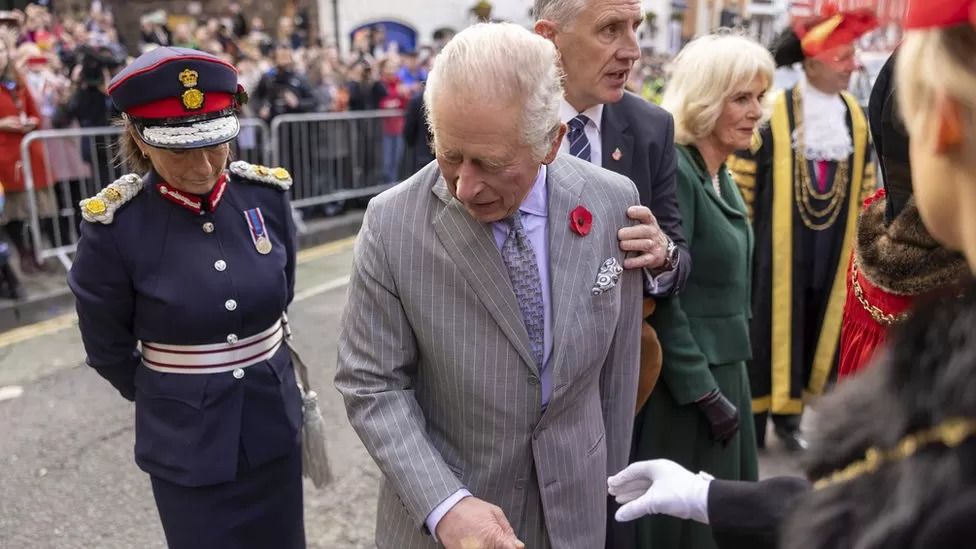 Student, 23, charged after eggs thrown at King Charles in York

A man has been charged after eggs were allegedly thrown at the King and the Queen Consort during a visit to York.

University of York student Patrick Thelwell, 23, will appear at York Magistrates' Court on 20 January charged with a public order offence following the incident in November.

A figure in the crowd appeared to throw four eggs as the royal couple arrived to unveil a statue in honour of the late Queen at York Minster.

All of the eggs missed.

The incident occurred on the second day of an official royal visit to Yorkshire, during which the King and Camilla later travelled to Doncaster.

The King continued shaking hands with a member of the public as the eggs flew in his direction, pausing briefly to look at the shells cracked on the ground.

He was ushered away by security, alongside Camilla, shortly after.

Police officers were then seen restraining a man on the ground behind temporary fencing set up for the royal visit.

People in the crowd started chanting "God save the King" and "shame on you" after the eggs were thrown.

"This follows an investigation by police into an incident in which eggs were thrown at HM The King in York on November 9 2022."

The CPS added that Mr Thelwell has the right to a fair trial.

It follows a separate incident where the King was allegedly attacked with eggs in Luton.

A 28-year-old man, who has not been named, was charged with a public order offence, and bailed to appear at Luton Magistrates' Court next month.