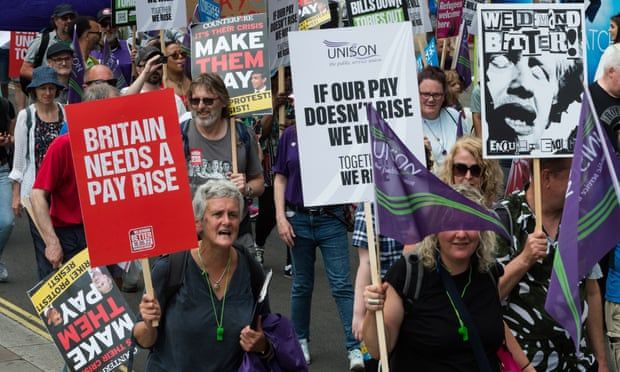 Public sector unions raised the prospect of widespread strikes in schools and hospitals after being told millions of their workers are to receive below-inflation pay rises.

Ministers announced the pay rises on Tuesday, with NHS staff receiving a rise of at least 4.5%, teachers at least 5% and £1,900 for police officers. Health unions angrily denounced the NHS pay rises as a “betrayal” and “a kick in the teeth”, and warned stoppages could be on the horizon.

With energy and food costs soaring, unions had demanded pay rises in line with inflation – currently 9.1% but expected to rise to 11% later in the year, according to the Bank of England – putting them on a collision course with ministers who have said pay restraint is necessary to curb rising prices.

Unions warned many staff would quit rather than accept a real-terms pay cut, exacerbating recruitment and retention problems in key areas such as teaching, nursing and social care – and adding to waiting times for NHS operations and ambulance call outs.

In a series of ministerial statements on Tuesday afternoon, the government announced:

*  More than 1 million NHS staff, including nurses, midwives and paramedics, will get a pay rise of £1,400, equivalent to 4%. However, cleaners and porters will get 9.3% while dentists and consultant doctors will receive 4.5%.

*  Teachers have been awarded 5% – though newly qualified teachers will get 8.9%.

Pat Cullen, the general secretary of the Royal College of Nursing, predicted an exodus of disillusioned nurses from the NHS. “This is a grave misstep by ministers … they have enforced another real-terms pay cut on nursing staff. It will push more nurses and nursing support workers out of the profession,” she said.

The NHS Confederation, which represents hospital trusts in England, warned the government’s failure to fully fund the awards had left the NHS in England in “the impossible position of having to choose which services they will cut back in order to find an unexpected £1.8bn to fund the additional rise.”

The Department of Health and Social Care factored a 3% pay uplift into NHS England’s budget for this year, and has refused to cover the cost of the difference.

“The government promised rewards for the dedication of the public sector workforce during the pandemic. What they have delivered instead, in real terms, is a kick in the teeth. The so-called wage offer amounts to a massive national pay cut. We expected the inevitable betrayal but the scale of it is an affront,” said Sharon Graham, Unite’s general secretary.

Schools in England could face disruption as a result of industrial action later this year, after teaching unions dismissed a 5% pay award by the government as “wholly inadequate” in the face of soaring inflation.

The government said the award was the highest in 30 years and includes an 8.9% uplift for teachers’ starting salaries, taking them up to £28,000 outside London, though this still falls short of the government’s 2019 manifesto pledge of £30,000.

Teaching unions responded angrily, pointing out that the pay increase, to be introduced from September, represents a real-terms pay cut. “After 12 years of pay freezes, pay pauses and below-inflation pay awards amounting to a 20% real-terms cut, teachers will be dismayed to hear that the government expects them to stomach the largest real-terms cut to their pay,” said Dr Patrick Roach, the NASUWT general secretary.

The 5% offer for experienced teachers marks an improvement on the 3% originally proposed by the government. It will mean an increase of almost £2,100 on the average salary of £42,400, but the unions said the increase did not go nearly far enough.

Geoff Barton, the general secretary of the Association of School and College Leaders, said: “It seems that loyal, hard-working public servants are always expected to take the hit. Unsurprisingly, they have had enough and we – like other unions – will be consulting our members to see whether they wish to take industrial action in response to this decision.”

The Police Federation broadly welcomed the award with its chair, Steve Hartshorn, saying it was a “small first step” in repairing a strained relationship with the government.

The federation representing Metropolitan police officers – the biggest branch – attacked the award, pointing out in recent years police pay has fallen 20% behind inflation. Its chair, Ken Marsh, described the award as “derisory” and “a betrayal.”