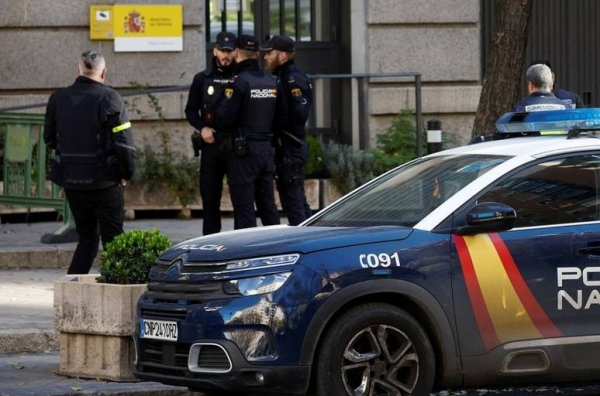 Spain said Thursday it was boosting security measures after a series of letter bombs were discovered in the country, including one that was sent to Spain’s prime minister last week and another to the US embassy.
The sixth and latest bomb was detected Thursday afternoon and sent to the US embassy in Madrid. It was intercepted at around 12.30 p.m. local time at the security post of the embassy, a police source told CNN. A special protocol was activated for these cases, the source added.

“We are grateful to Spanish law enforcement for their assistance with this matter,” Jamie Martin, a spokeswoman for the US Embassy in Madrid, told CNN.

A previous bomb, sent to an air force base near Madrid, was discovered before dawn Thursday, after one exploded at the Ukrainian embassy in the capital Wednesday and another was deactivated at an arms manufacturer.

A device addressed to Prime Minister Pedro Sanchez arrived in the post at his official Moncloa compound on November 24 and his security detail singled it out as suspicious. After establishing a security perimeter, they conducted a “controlled explosion” of the envelope, an interior ministry statement said.

The bomb “would be similar, for its features and content” to those received on Wednesday at the Ukrainian embassy in Madrid and at the arms manufacturer Instalaza in Zaragoza, and on Thursday at Spain’s Torrejon air force base near Madrid, the statement said.

The most recent letter bomb was intercepted just before dawn Thursday after being sent to the Torrejon air force base.

Spanish defense ministry officials said a suspicious envelope was detected by a scanner at the base. The scan indicated the envelope could have “some type of mechanism” inside, a statement said. Police were called to the base to analyze the envelope, which was addressed to the Satellite Center at the air base.

Perez said the letters were likely sent from Spanish territory, and that in four out of the five cases, protection measures worked successfully to neutralize the bombs.

People should remain “calm,” the minister said, and there was no reason yet to justify raising a terror threat.

The latest developments followed the discovery of two letter bombs on Wednesday. The first exploded at the Ukrainian embassy in Madrid in the afternoon, injuring an employee, Spanish officials said.

That envelope, addressed to the Ukrainian ambassador to Spain, exploded after being handled by a Ukrainian worker at the embassy, Spain’s foreign ministry said in a statement. Later, in the evening, police deactivated a letter bomb at a weapons manufacturer in northern Spain, a senior Spanish official said.

The envelope sent to the arms maker had the same return address as the envelope that exploded at the Ukrainian embassy in Madrid, said the official, Rosa Serrano, in an interview with Spain’s radio station SER late Wednesday.

“The return address on the envelope is an email that is the same” on both envelopes, said Serrano, who is the top Spanish government official in the Aragon region where the second letter bomb arrived.

The envelope at the weapons maker in the city of Zaragoza, in Aragon, “apparently came from Ukraine,” Serrano said, adding that authorities suspect the one at the embassy may have also come from Ukraine.

An executive at the arms manufacturer was apparently aware of the Madrid explosion, so when an envelope arrived soon after that no one seemed to recognize, the company called police, Serrano said.

The bomb squad arrived and police determined there were explosives inside the envelope, designed to explode on opening. It was deactivated, Serrano said.

Serrano didn’t identify the firm, but Spanish media reported its name and said it manufactured rocket launchers that Spain has sent to Ukraine as it battles Russia’s invasion. CNN could not immediately confirm that detail.

“I know the firm has been an arms manufacturer a long time, with state-of-the-art facilities,” Serrano said in the radio interview.

Police notified Spain’s National Court, which investigates terrorism, about each of the letter bombs, the statement said.

The interior ministry has ordered increased security measures at all embassies and consulates in Spain, as well as other sites that require special protection. Security had already been boosted after the start of Russia’s invasion of Ukraine.
Add Comment