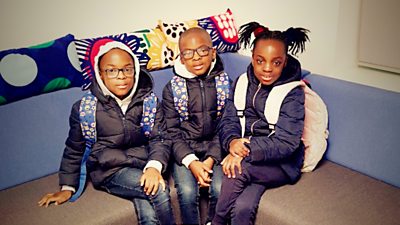 A mother of eight-year-old triplets has filmed a video diary to record their return to school.

The triplets - Yimi, Mbetmi and Waimi - said the day was "big" and "important" and it felt "so nice" to be back in their uniforms.

Mum Esther, from Hucknall in Nottinghamshire, said: "The house is so quiet. I kind of miss them... but it's quite a good thing that they are going back to normal."

She has previously said she is lucky because her employer was allowing her to work flexible hours so she could support her children.