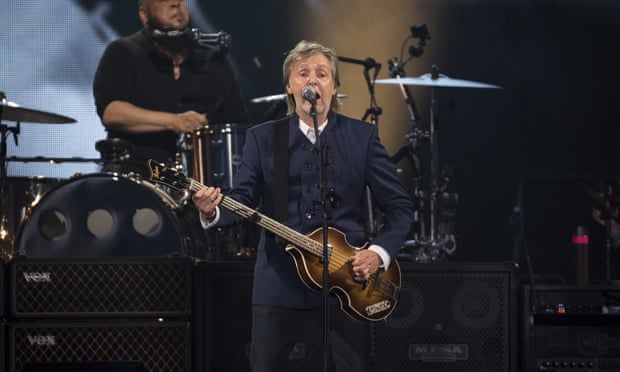 Ex-Beatle turned 80 on Saturday, days after a brief US tour which saw him joined on stage by Bruce Springsteen
Sir Ringo Starr, Bruce Springsteen and Ronnie Wood were among stars who have been wishing Sir Paul McCartney a happy 80th birthday.

The ex-Beatle turned 80 on Saturday, days after finishing a brief US tour. The milestone comes the weekend before McCartney becomes Glastonbury’s oldest solo headliner, when he takes to the Pyramid stage on Saturday.

On Thursday, he was joined by Springsteen on stage in New Jersey, and the pair celebrated with a duet of Glory Days and I Wanna Be Your Man. Springsteen popped up again later to play guitar on a medley of songs from the Abbey Road album.

Jon Bon Jovi also joined Sir Paul on stage at the same concert, singing Happy Birthday to him with the help of 50,000 fans.

Fellow ex-Beatle Sir Ringo Starr, meanwhile, sent “peace and love” to his friend and former bandmate on Twitter on Saturday, posting a picture flashing a V sign for peace.

And American singer-songwriter Carole King shared a photo of the pair embracing, with the caption: “Happy birthday paulmccartney. Welcome to the 80s.”

As well as fellow rock stars, McCartney was congratulated by former prime minister Gordon Brown. Referencing Thursday’s gig, Brown tweeted: “I think we would all like to sing Happy 80th Birthday to Paul McCartney today. My friend Jon Bon Jovi doing it in style here.”

Animal rights group People for the Ethical Treatment of Animals (Peta), of which Sir Paul is a longstanding supporter, also took the opportunity to thank him for his work, saying: “We love seeing you advocate for animals, and strive for ethical change! Thank you for raising awareness of the SaveCrueltyFreeCosmetics European Citizens’ Initiative.”

During his career, Sir Paul has won 18 Grammys, been awarded an OBE and inducted into the Rock and Roll Hall of Fame twice. He was appointed a member of the Order of the Companions of Honour in 2017.

The father of five has been married to Nancy Shevell since 2011.
Add Comment