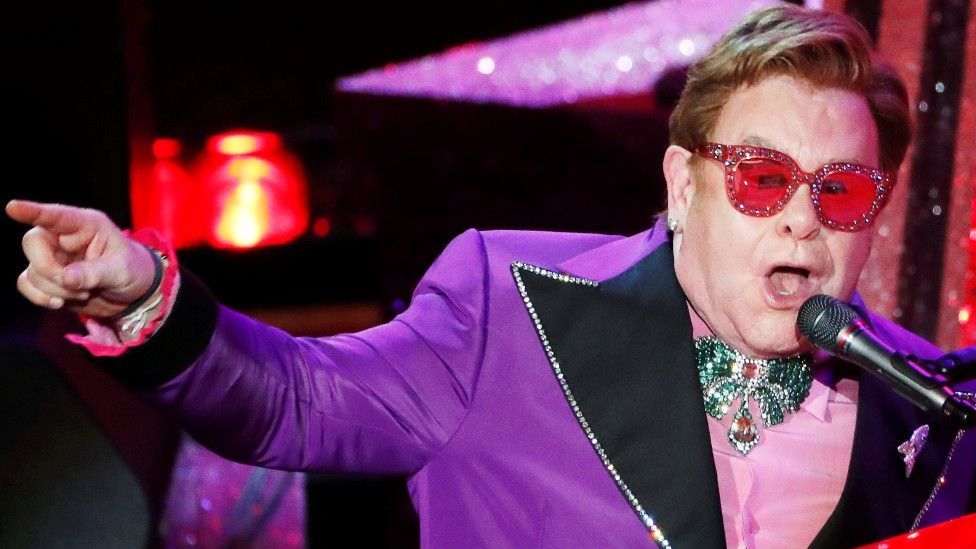 Sir Elton John has had "very positive" talks with Culture Secretary Oliver Dowden about EU travel for UK musicians, but said visa-free touring is not currently "on the cards".

Last month, the star signed a letter demanding action to cut red tape and fees for musicians after Brexit.

The matter was "swept under the carpet" before the UK left the EU, he said.

He said it was now his "duty" to try to help improve the post-Brexit conditions for younger stars and crews.

Up-and-coming acts hoping to tour the continent when it is safe to do so will be "up against a brick wall" of fresh "bureaucracy", "paperwork" and added "finances", he said.

"It's much more difficult for young artists to get this together because of all the red tape," Sir Elton told BBC arts editor Will Gompertz. "Every country has these different rules, there's so much procedure to go through.

"People like myself are not really affected by it, we have a foundation of people who can look after it, it still has to be done but it's much easier," the 73-year-old continued.

"[But] we find ourselves in the situation because of Brexit, this has arisen. How do we fix this? How can we fix this?

"I want the situation to be resolved, so that young people don't have the difficulties of trying to tour in Europe, because it will affect their careers, it will stunt their growth and their creativity."

Sir Elton has had hits with songs such as Rocket Man, I'm Still Standing and Candle in the Wind. He noted how music had always been one of "Britain's biggest exports", pointing to the likes of Dua Lipa and Lewis Capaldi as well as leading ballets and operas.

He said he and Mr Dowden spoke for about 20 minutes and discussed ideas like the potential creation of a website, backed by record labels, that could "help them with the logistics of touring in Europe".

He explained: "If they can be helped through this it will take away a lot of their fears, and make life easier. I'm sure we can establish this, and we have to basically, otherwise they're going to have not much of a future, and that is a crying shame, as there's so many great artists out there."

Mr Dowden tweeted to say he had "a v positive call" with Sir Elton and husband David Furnish, and that there was "lots of work going on in Govt on this".