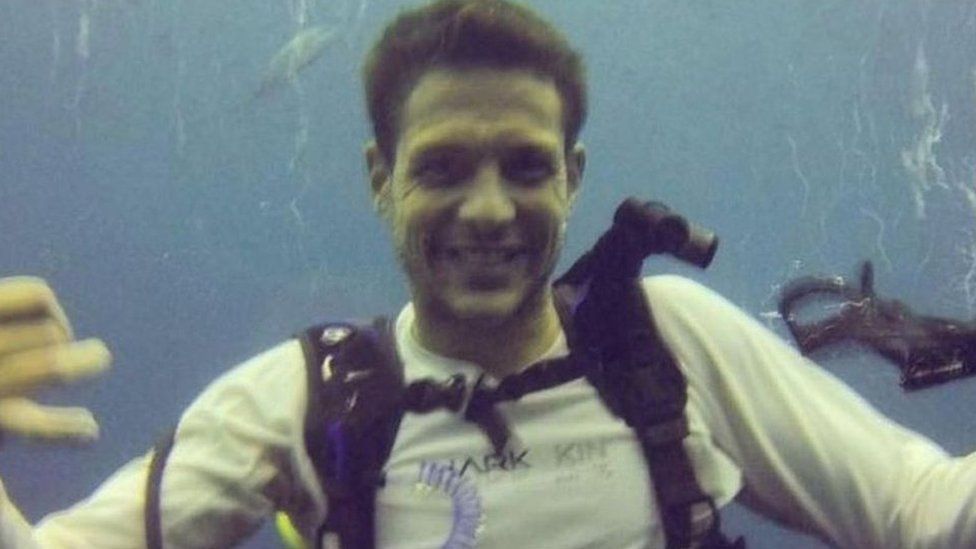 A 35-year-old British man has been named as the victim of Sydney's first fatal shark attack in nearly 60 years.

A friend confirmed Simon Nellist died in the attack on Wednesday.

Police have not yet formally identified the victim and his family have not commented.

Australian authorities are still searching for the great white shark, with swimmers banned from the water and most city beaches shut after Wednesday's attack.

Mr Nellist - who was a diving instructor - was mauled by a great white shark just off Little Bay in east Sydney. He was a member of the city's Scuba Diving Social Club and a regular swimmer at the beach, BBC Sydney correspondent Shaimaa Khalil reports.

A UK foreign office spokesperson said consular staff were in touch with New South Wales Police. "We are supporting the family of a British man and our thoughts are with them at this difficult time," the spokesperson said.

Shark attacks in Sydney are uncommon because the city has long had nets and other deterrents in its waters.

On Thursday, surf lifesavers on jet skis patrolled a 25km (15.5 mile) stretch of water from Bondi in the city's east to Cronulla in the south to find the shark. Authorities are also using helicopters and drones.

The state government said its shark experts had estimated the predator to be a great white shark "at least three metres" in length based on footage of the incident taken by a member of the public.

Several passers-by who witnessed the scene have described a vicious and frenzied attack.

"[The person] was swimming and a shark came and attacked [them] vertically," Kris Linto told Nine News.

"We heard a yell and turned around, it looked like a car had landed in the water, a big splash then the shark."

One man recounted how he had been fishing on the rocks when he saw the swimmer get dragged under.

"It was terrible. I am shaking. I keep vomiting. It's very, very upsetting," he told ABC News.

Authorities managed to retrieve body parts from the water two hours after the attack. 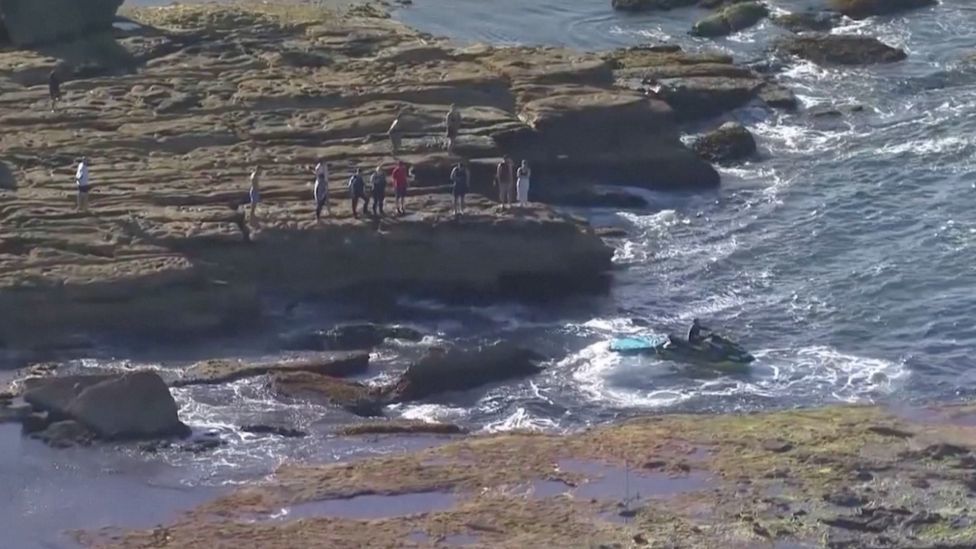 The area's state MP Michael Daley said locals were shaken by the "horrific" incident. The victim had been a regular visitor. "[He] came here and swam nearly every day," he told the ABC.

"It's a beautiful day at one of Sydney's most beautiful beaches, but there's a real dark pall hanging over our community today," he said.

Wednesday's incident is a horrible tragedy, and in days to come there will be questions about how the shark slipped through the protections set up.

Right now we don't have any of those details. The New South Wales state government already runs a shark mitigation programme believed the largest and most sophisticated in the world.

Sydney beaches have been guarded by nets for nearly a century. On summer weekends, drones and helicopters hover, scanning for sharks. (It's not uncommon to be lazing around on the sand when suddenly a siren blares and lifeguards are ordering people out of the water.)

Authorities also run an extensive shark-tagging programme where the most concerning shark species - tiger, bull and great white sharks - have trackers attached to their fins.

When they're picked up in the nets, they're tagged and relocated about a kilometre away.

On Thursday, authorities spooled out sensor drumlines - baited strings - to try to find the white shark. Authorities do find the predator most of the time, usually within days.

In the past that's led to culls. Officials haven't yet said what they'll do. But there's little community appetite for killing sharks these days.

Instead shark safety is about strengthening protections; educating beachgoers.

Sharks are just a part of beach culture. And many Australians accept that entering the water will always contain some risk.

Contact between a human and a shark is rare, given there are thousands of sharks in the water at any time. Attacks usually occur in the warmer summer months (December - February) in Australia because more people are in the water.

Australia typically records about 20 shark attacks each year, with most in New South Wales and Western Australia. There have been four shark attacks so far this year, according to the Australian Shark Attack File.

Historically, dying from a shark bite is not common. In over a century of records, Australia's shark attack mortality rate is 0.9 - less than one person per year.