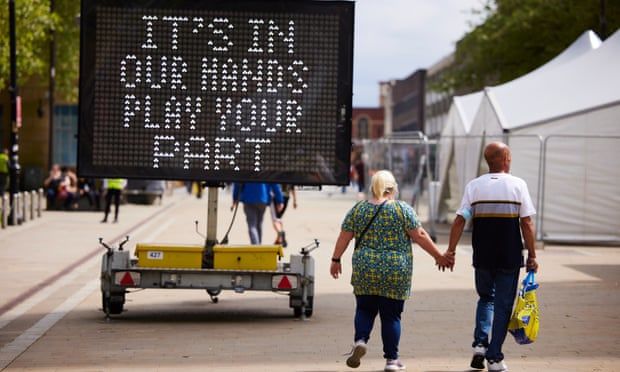 More than 16,000 new confirmed Covid cases were reported in the UK on Wednesday, the highest daily figure since early February, even as the vaccines minister expressed confidence that the next stage of lifting restrictions in England could go ahead in July as planned.

The newest figures showed another 19 people had died within 28 days of testing positive for Covid-19, bringing the UK total to 128,027.

While death figures remain relatively low, the sharp rise in reported cases would appear to make it even less likely that ministers will scrap most remaining Covid restrictions during the midway point of the current four-week delay to reopening.

The fourth and final stage of reopening was originally due on 21 June, but the rapid spread of the more virulent Delta variant – becoming endemic around the UK – prompted Boris Johnson to announce a delay until 19 July, to allow more vaccinations to take place.

Johnson said there would be a review into whether this could happen on 5 July if the situation improved. But with ministers due to announce the decision on this on Monday – they have promised a week’s notice for any changes – the rising case numbers make it unlikely.

However, addressing a Downing Street press conference, the vaccines minister, Nadhim Zahawi, said he believed a vaccination target seen as necessary to reopen on 19 July – two vaccine doses to at least two-thirds of adults – would be met before then.

“I am confident that we will have 66% of the adult population with the protection of two jabs by that date that the prime minister has set us,” Zahawi said. 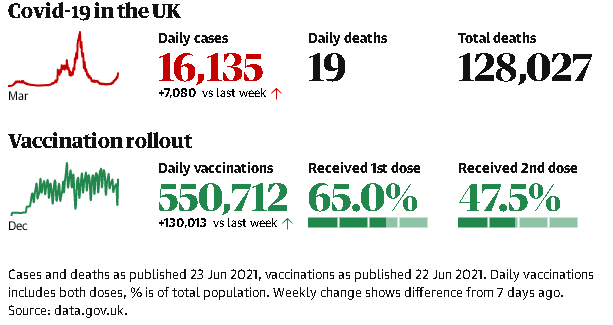 On Wednesday, Downing Street said it was watching any potential spread of the so-called Delta Plus variant, which is the Delta variant with an additional mutation called K417N.

Public Health England said 41 cases of Delta Plus had been identified across England. Johnson’s spokesperson said: “That is obviously something we are monitoring closely, and Public Health England have said additional measures are already in place where cases of this variant are detected.”

The concern about Delta Plus is that the K417N mutation is also found in the Beta variant, which was first detected in South Africa. There is evidence that suggests the Beta variant could be partially resistant to vaccines based on the original pandemic virus, and to immunity gained from previous Covid infection.

Speaking at the Downing Street press conference, Mary Ramsay, a doctor and head of immunisation at PHE, said she expected vaccines to work against it. “The good message is that what we expected to happen with Delta was that the vaccines would prove to still work against the more serious disease, and we expect the same for this other variant.”

The Delta Plus variant was first observed in India and has spread to several countries, including Nepal. However, given that numbers of the variant remain low it is possible that it is not more transmissible than the standard Delta variant.