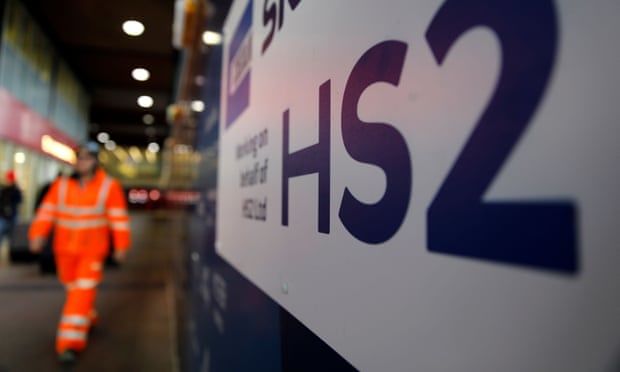 Exclusive: Assurances offered to Graham Brady may raise questions about why decision has not been made public

Grant Shapps has privately promised to scrap a controversial £3bn branch of the HS2 train line that carves through the constituency of the 1922 Committee chair, Sir Graham Brady, and two other Tory MPs, the Guardian understands.

The link, known as the Golborne spur, would connect the main Crewe-Manchester HS2 line to the west coast mainline just south of Wigan.

Brady, the Tory MP for Altrincham and Sale West, which would be affected by the spur, wrote to a constituent last week saying Shapps had given him “categorical verbal assurances” that it would be removed from the HS2 bill currently going through parliament.

The link has been the subject of heated lobbying by MPs in the Warrington, Wigan and Trafford areas where their constituencies would be affected. But the private assurances from Shapps to Brady, who runs the powerful 1922 Committee of backbenchers, may raise questions about why the transport secretary has not made public any decision.

The government had promised in its integrated rail review to consider alternatives to the spur, which would have joined HS2 to the west coast mainline and cut the journey time to Glasgow. However, the HS2 bill published in February included plans to keep it, much to the dismay of MPs in the area. 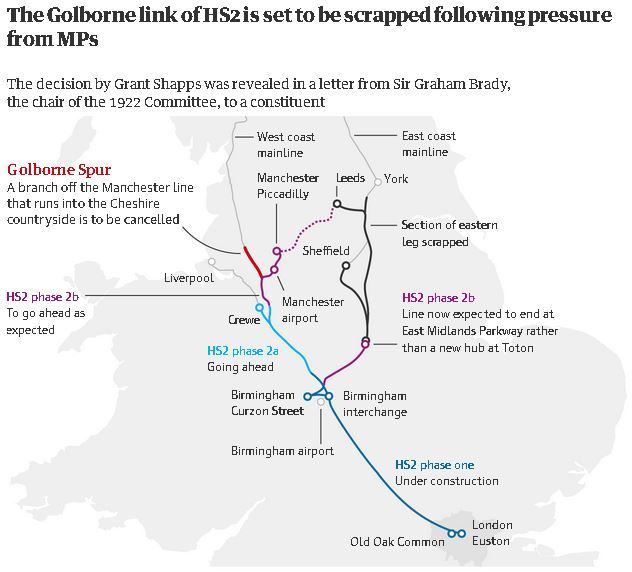 Despite the appearance of the Golborne link in legislation, Brady told his constituent it would soon be removed from the bill by the Department for Transport, claiming it was only in there to prevent delays in its publication.

In his letter, Brady said: “I have received categorical, verbal assurances from the secretary of state that the government will table an amendment as part of the second reading of the bill. This will remove the Golborne spur from the legislation. This is expected to take place in the summertime. The only reason that the bill was introduced with the spur still in place is that a revised environmental impact assessment would have delayed the introduction of legislation.”

The bill is likely to be carried over into the next session of parliament after the Queen’s speech in May, with its second reading in the summer. Alternative routes are being considered but one proposed in the union connectivity review drew criticism from Wigan council, which supports the Golborne link, for bypassing the town, meaning it would lose benefits.

Brady told the Guardian: “Local Conservative MPs Andy Carter, James Grundy and I have been campaigning for years to make the case for this £4bn white elephant to be dropped. A new environmental impact assessment would have delayed the introduction of the bill for months so the Golborne spur is in the bill as published but I am delighted that the government has accepted our commonsense argument.

“I hope the next thing will be a decision to locate the proposed ‘Manchester airport’ station at the airport – not a quarter of a mile away at Davenport Green as currently proposed.”

James Grundy represents Leigh, where opponents say the village of Lowton would lose a business park, civic field and woodland if the link went ahead. Andy Carter represents Warrington South, where campaigners say it would negatively affect the greenbelt without benefiting the town. The Labour MP Charlotte Nichols, whose seat is Warrington North, also opposed the spur. In Altrincham, Brady has criticised the line for dividing the historic village of Warburton.

Shapps has previously sounded less than enthusiastic about the Golborne spur, citing it in 2020 as an example of an area that could be reworked, saying it added billions to the cost with little benefit.

A government source said: “No decisions have yet been made. It is the government’s intention to deliver the right infrastructure for long-term benefits to the rail network, the North and Scotland.”