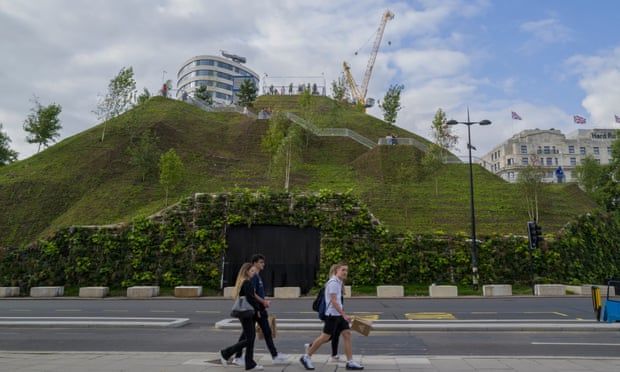 After a summer of free entry, visitors will now have to pay up to £8 to climb the London project. But will they bother?

It has been called a “BTec Eiffel Tower” and a “slag heap”. It’s been compared to “a car-park Santa’s grotto, with dogs pretending to be reindeer”. The Marble Arch Mound, the temporary artificial hill commissioned by Westminster city council as an “ambitious” visitor attraction, has become, as a representative of the local community put it, “an international laughing stock”.

The council responded to criticism by allowing free entry during August, and a certain number of the curious and the ghoulishly fascinated have turned up. This week it will start charging again. Given fundamental flaws in the project’s conception, the question is whether people will want to pay £8 for a weekend fast-track ticket now, any more than they did when it first opened at the end of July.

Two complaints stand out: its scrawny trees and patchy brown grass look nothing like the luxuriant foliage promised in computer visualisations and the 25-metre height of its viewing platform isn’t sufficient to see over nearby buildings and the mature trees in neighbouring Hyde Park. “It wasn’t quite high enough to offer the views,” said one mother last week, as she took her mildly disconsolate children down from the summit, “and they obviously didn’t have a good enough gardener”.

There’s also the matter of its cost. Council minutes from as recently as May put “current indicative construction costs” at “approximately £1.998m”. With operating and other costs included, the total figure was to be £3.3m. The cost is now put at £6m. The council declined to give reasons for the increase, on the basis that it is “subject to an internal review”.

The leader of Westminster city council, Rachael Robathan, promised that “we will be able to cover almost all of the construction and operating costs over its six-month lifespan from ticket sales and sponsorship”. It’s not clear how much sponsors will pay, if anything, to attach their name to a PR disaster. There is no sign yet of the Marks & Spencer food trucks nor the Percy Pig vending machine (a “world first” where “children will be able to get a picture with Percy via a mini-interactive experience”) which would have contributed revenue.

It wasn’t meant to be like this. Robathan told the local amenity group Sebra that she could “safely say it is a stunning vantage point”. It would be, she said, “a good investment”. Elad Eisenstein, the council’s programme director for the Oxford Street district, and a driving force behind the mound, said it would “attract people back to the West End”. 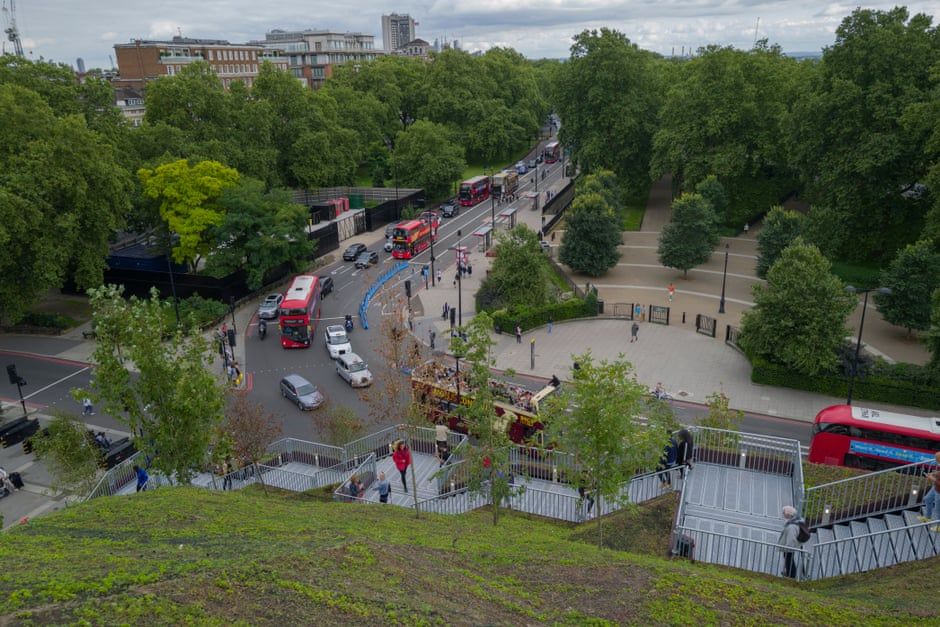 The mound offers good views of the traffic on Park Lane.

The project was driven by the impacts on Oxford Street of online retail, shopping malls such as London’s two giant Westfield centres, and Covid. Famous stores, such Debenhams and Topshop, have closed. So “a bold vision” was conceived “to deliver a successful future for the nation’s high street, as the greenest, smartest, most sustainable district of its kind, anywhere in the world”.

The mound would be a harbinger of this grand plan, a “bold, new visitor attraction”, a “catalyst for the district to climb back to global acclaim and success”. It would draw much-needed footfall back to Oxford Street, whose western end terminates at Marble Arch.

The Dutch architects MVRDV were approached to design the attraction, which could have been a good choice. They have a track record of imaginative and crowd-pleasing projects, including a grand scaffolding staircase that took people up to a temporary cinema on top of a commercial building near Rotterdam’s central station. In Tainan, Taiwan, they made the remnants of a shopping mall into a water garden, and they made a former elevated highway in Seoul into a park.

They had also had an earlier, unsuccessful, go at mound-building. In 2004, they proposed burying the Serpentine Gallery, which is a mile from Marble Arch, in such a structure, but the project was aborted due to the difficulty of its delivery. If this was a warning of the problems in creating a blooming hillscape at high speed, it wasn’t heeded. Nor were the doubts of local community groups, expressed as soon as the mound was announced last February. “We criticised the project from the get-go, knowing that anything that involves planting on that scale takes time,” says Tim Carnegie of the Marylebone Association, which represents people who live and work in the area to the north of Marble Arch.

Eisenstein promised its opening for the expected end of lockdown on 21 June, “or within a few weeks of that”. It eventually opened on 26 July, then closed after two days, then reopened – with free entry – on 9 August “We wanted to open the mound in time for the summer holidays,” said Westminster’s chief executive Stuart Love, but he and MVRDV acknowledged that this was “too soon”.

“It is always unpredictable,” said the architects, “when you work with plants and trees … we just need to give nature a bit of time.” They cited “challenging conditions”, and certainly this summer’s droughts and rainstorms haven’t helped, but this defence begs the question why something so ambitious was attempted at breakneck speed.

The official reason for the rush is the urgency of the crisis facing Oxford Street. “Doing nothing is not an option,” council officials liked to say, for which reason they pushed the mound through with a minimum of consultation and scrutiny.

But Paul Dimoldenberg, a councillor in Westminster’s Labour opposition, points out that it was never clear how the 280,000 expected to visit the mound would, even in the unlikely event that all also went shopping, make much impact on the footfall of a street which, pre-pandemic, drew 200 million visits per year. “It’s the tiniest tiniest drop in the ocean,” he says.

Dimoldenberg says that the mound is a case of the council’s “total hubris” and that “heads should roll”. So far, the council’s deputy leader, Melvyn Caplan, has resigned over the budget overrun. But Robathan and Eisenstein, the project’s most prominent enthusiasts, for now remain in place.

Meanwhile, entry fees will come back on 1 September and the mound is due to remain until January. At the time of writing, the ticketing page on its website shows “excellent availability” for every timeslot after charging starts. It doesn’t seem likely that some extra growth on the trees will be enough to salvage the project.