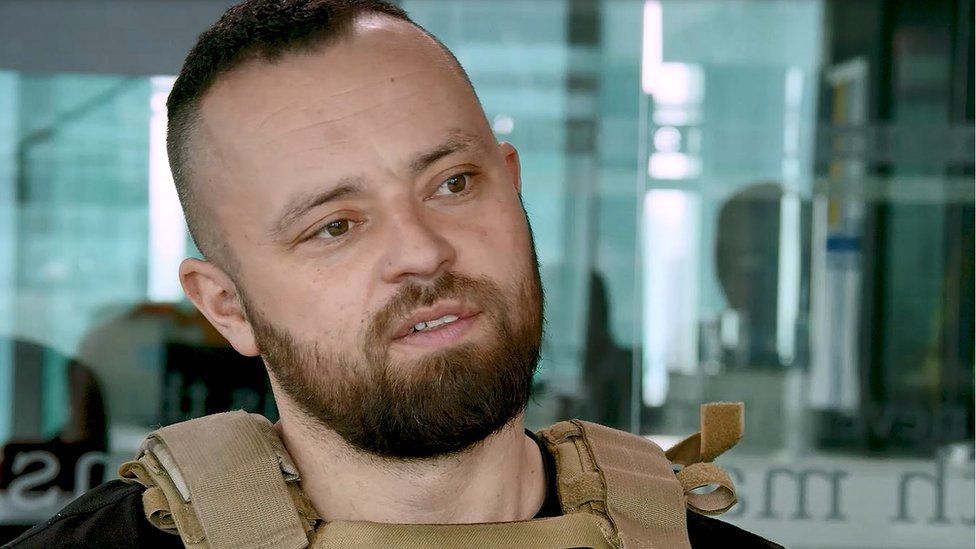 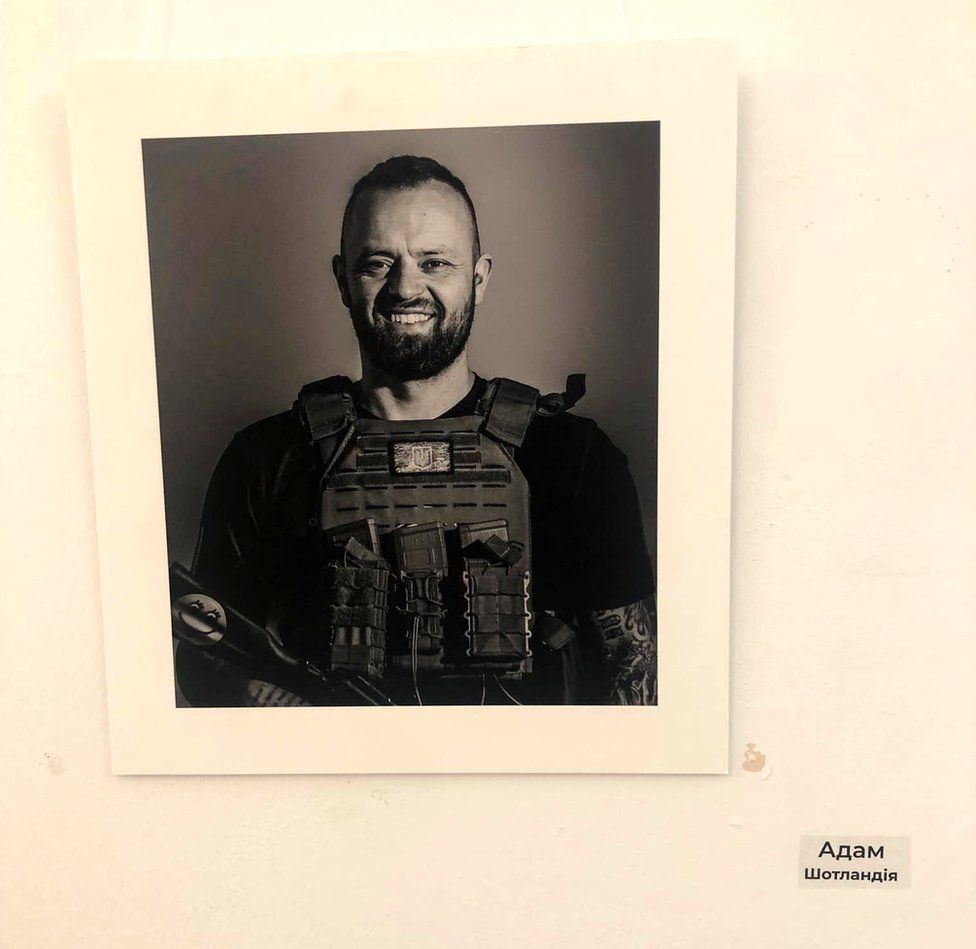 Adam Ennis, 35, left his garage business to join the international legion, with just basic training he gained from a cadet scheme at school.

Since March, he has seen action in at least two major fronts.

His parents have not seen him since he returned to action in July so were surprised to discover he was featured in a film and exhibition in Kyiv.

Adam, from Biggar in South Lanarkshire, is one of 10 soldiers featured in the photographic exhibition "Warriors of the World - Warriors of Light" alongside a documentary "International Legion" at the Bouquet Kyiv Stage Festival.

Organisers describe the group as "warriors from different countries, who are defending our state". 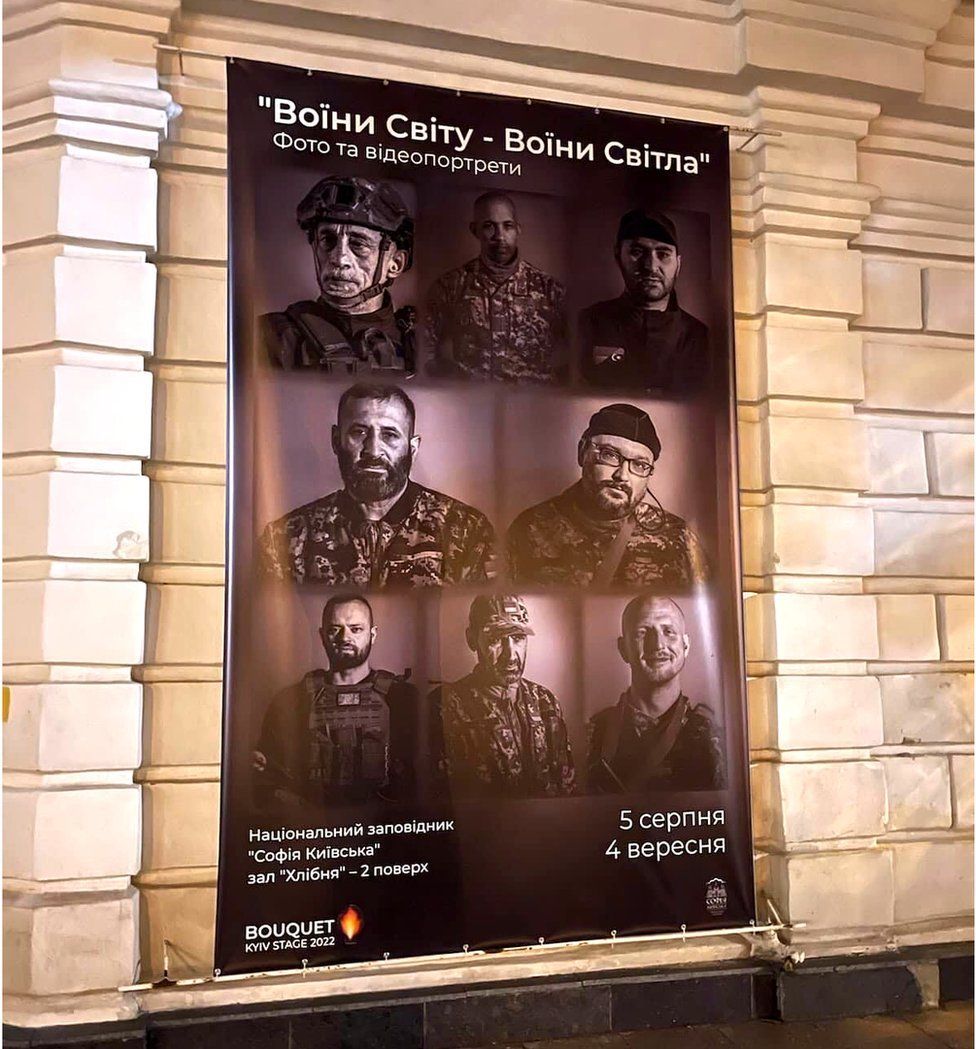 Adam, bottom left, appears in a poster for the exhibition in Kyiv's Bouquet Stage Festival

His father Brian told BBC Scotland: "We don't hear from him a great deal. When he is at the front, it's just a few minutes every two or three weeks.

"So it was a complete surprise to see his face on this big poster Ukraine."

Brian and his wife Linda only knew about the exhibition because a friend of Adam's tagged him on Facebook. He then discovered his son was being hailed a hero.

"A wee boy from Symington, working in Biggar and here he is being recognised in such a short period of time for his efforts," he said.

"They call him a hero but, as he says in the documentary, he recognises the true heroes are the people of Ukraine."

In March, just weeks after the Russian invasion, Adam ignored official warnings and headed to the war zone.

The Foreign Office has warned against travel to Ukraine to fight.

However, Adam made his way to country and joined the International Legion of Territorial Defence of Ukraine (ILDU), training at Yavoriv military base near the Polish border.

His rifle skills, earned in the combined cadet force at Merchiston Castle school in Edinburgh, saw him selected for a unit heading to defend Kyiv from advancing Russian troops.

He told BBC Scotland he witnessed "atrocities and devastation".

In the Ukrainian documentary, Adam describes scenes from his first deployment in Irpin, outside Kyiv: "I have never seen anything like that and never thought I would in my lifetime. Total devastation, buildings destroyed, lives destroyed, lives lost.

"We were on the frontline, the Russians were about 200m away. There were flats, buildings on fire and people were still in their homes, living their lives as normal.

"There was artillery coming down, and there was a guy out walking his dog, in his garden, it was surreal. But they have no option, what can they do? This is their home."

He explains why he felt the need to get involved in another country's war. 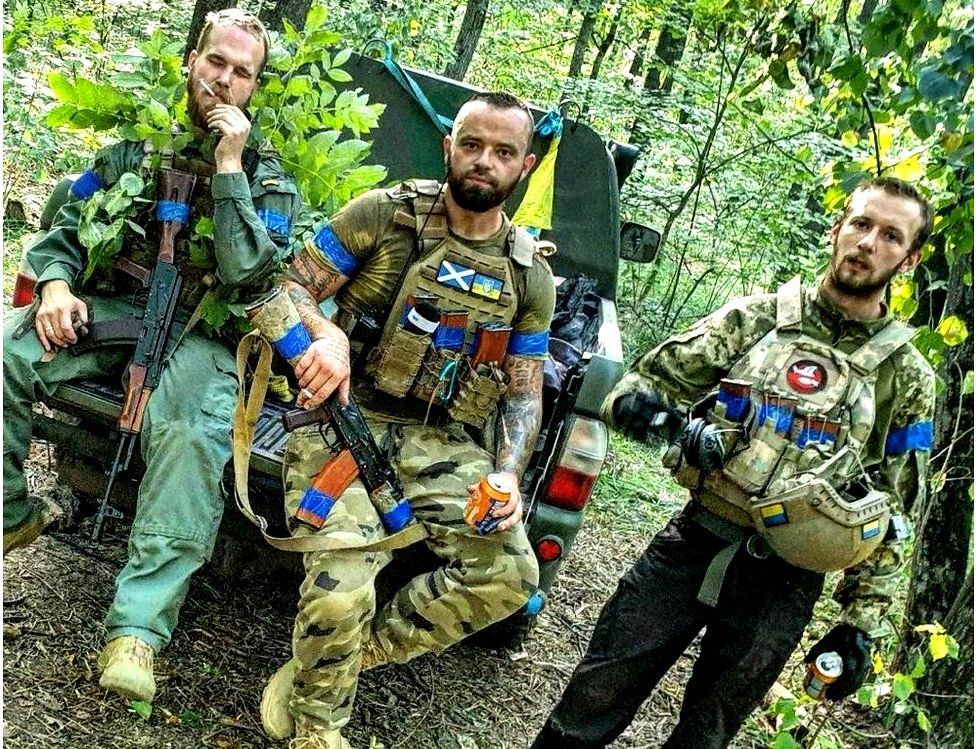 "When things like this happen, it doesn't matter nationality, colour or religion. People are people. Ukraine is no different to Scotland and we stand together.

After returning to Scotland in June to raise money to take an armoured truck back to the war-torn country, he went back in July.

Brian made the journey with his son to the Polish border.

"We drove through five countries. On the way, we were met with great acts of kindness - people helping with work on the truck, others paid for our petrol."

It was a chance for him to get a flavour of why his son was risking his life in another country.

"He was showing me where he went when he first arrived," he said.

"The railway station was the first place in Poland the refugees appeared and it was chaos when he was first there at the height of the mass evacuation.

"When I arrived, there were only about 300 people - women, children, some elderly men - but what got me was the total silence in the station as I was cutting through.

"These kids were just traumatised from what had happened to them. It was quite upsetting to see their wee faces. They were getting aid and some had only a plastic bag with them."

Brian said it was very difficult to say goodbye to his son as he crossed over into Ukraine.

"We were hoping he wouldn't go back but his unit needed a medical vehicle and that's what he came back for.

"I understood that he is more committed than he has ever been to helping the Ukrainian people.

"As a parent we would rather he would be here, out of harm's way. We are proud of him, but we worry."

"He is appreciated very much by the Ukrainian people for what he is doing. He certainly feels valued for what he does."