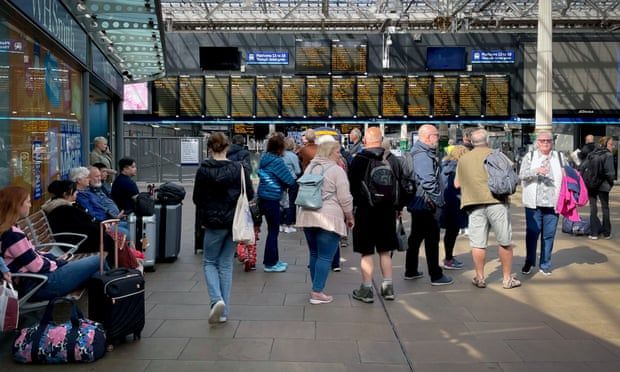 ScotRail will open talks with the rail union Aslef on Tuesday to resolve a pay dispute that has led to the train operator axing more than 1,000 services from its timetable.

The company confirmed on Monday that it would meet union leaders hours after Aslef’s Scottish organiser, Kevin Lindsay, accused it of repeatedly ignoring his invitations to negotiate.

The newly nationalised company has cut about a third of its services, including 700 weekday trains and nearly 350 at weekends, from Monday after a large majority of its 1,200 drivers refused to work overtime.

One big event expected to be hit is Scotland’s sold-out World Cup qualifying match against Ukraine at Hampden, Glasgow, at 7.45pm on 1 June. Under ScotRail’s revised timetables, local train services will finish midway through the game, threatening travel chaos for fans.

ScotRail relies heavily on its drivers volunteering to work overtime or on rest days. Its drivers are furious that the company has verbally offered a pay rise of 2.2% this year and a revenue-sharing agreement, and have refused to take on extra shifts.

The cuts have been greeted with dismay by commuters, opposition MSPs and businesses, with Nicola Sturgeon, the first minister, facing intense pressure to intervene in parliament last week. She said ScotRail’s drivers were already well paid, earning more than £50,000 a year, and needed to make reasonable demands.

Lindsay said ScotRail had refused to hold pay talks after the two sides held a brief meeting on 4 May, when ScotRail tabled its pay offer.

Lindsay wrote to Sturgeon on Monday urging her to intervene in the “shambolic” pay talks, saying: “The way hardworking, committed and skilled rail staff are being treated is appalling. The pay award being offered is just not credible.

“A 2.2% pay increase (offered verbally not in writing) at a time when inflation is nearing 10% is a significant real-terms pay cut. It is neither fair nor reasonable to expect train drivers, or indeed any worker, to accept such a cut in their pay at the same time as their cost of living is soaring.”

Aslef is preparing to ballot its members in early June to seek approval for industrial action, including an all-out strike, to improve the pay offer.

He said ScotRail had cut far more services than it needed to; many drivers were sitting idle in mess rooms at stations around the country without trains to drive. “There are train drivers willing to drive trains. ScotRail has cut services far too much, far too deeply. It’s just bizarre. I don’t understand why they don’t want to talk to us.”

ScotRail has been approached for a response to Lindsay’s allegations. Jenny Gilruth, the Scottish transport minister, suggested ScotRail was planning to meet Aslef this week. She said she was working with the operator to resolve the crisis.

“We need to reach a resolution,” she told BBC Scotland. “Quite rightly, passengers are deeply frustrated. I’ve been hearing reports this morning. I travelled by train this morning to [Edinburgh] Waverley, where I am today, and people are scunnered [disgusted], quite frankly, by what’s happened.”

Aslef officials believe ScotRail may be using the pay dispute as a cover to permanently cut its timetable, partly because passenger numbers have fallen sharply during the Covid crisis, and some observers expect numbers to remain below pre-pandemic levels as people’s work habits change.

A report last year by Prof Iain Docherty of the University of Stirling said demand for rail was likely to increase substantially in future as the need for low- or zero-carbon public transport rises to cope with tougher climate targets.

But in the medium term, he said Covid would have a significant impact on demand. “A scenario of around 20% less demand for rail commuting in a post-pandemic ‘new normal’ is therefore a reasonable starting point for future planning assumptions,” he said.

The ScotRail controversy has increased criticisms of Sturgeon’s government, which includes two Scottish Green ministers. Opposition parties have attacked its transport strategies and economic competence amid a long-running dispute over the country’s ailing ferry services and a badly mishandled ferry replacement contract.