On the edge of the Scottish Highlands, three families of beavers slip, slide and splash between a series of ponds and swamps at the Bamff estate.

The animals have been breeding there for almost two decades, brought in by Paul and Louise Ramsay who own the estate, and are now establishing themselves in the wild.

The Ramsays are often credited as pioneers in the reintroduction of Eurasian beavers, which are native to the UK but were hunted to extinction there during the 16th century. They are just the first chapter in what is now a nationwide rewilding movement.

As Scotland hosts the COP26 climate summit in Glasgow, calls on the government to support rewilding, regenerate peatland and reintroduce lost species are becoming louder -- and the potential benefits becoming clearer. 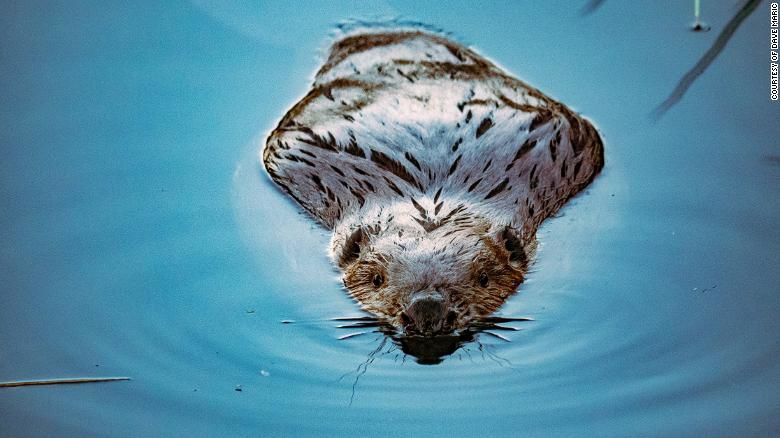 With their dam-building, beavers can quickly modify a landscape, creating ponds and canals.

"Paul and I wanted to bring back beavers in order to restore the wetlands and because we believe that animals that have been here historically should be returned," Louise Ramsay tells CNN. "What we learned as we went along that journey was that the beaver doesn't just bring itself back, it brings back extraordinary habitat and an extreme boom in biodiversity."

Trees felled by the gnawing beavers offer a rich habitat to fungi, insects, owls and woodpeckers, and intricate dams built along the ditch that runs through the 1,300-acre estate have turned the area into a wide wetland where otters, herons and water voles thrive.

Frogs and toads -- populations of which are in decline across much of the UK -- have arrived in their masses since the beavers were introduced, says Sophie Ramsay, daughter of Paul and Louise, who also manages the estate.

"Come summer, we normally see thousands upon thousands of them -- there are times when you can't walk because they are everywhere on the ground," she says. 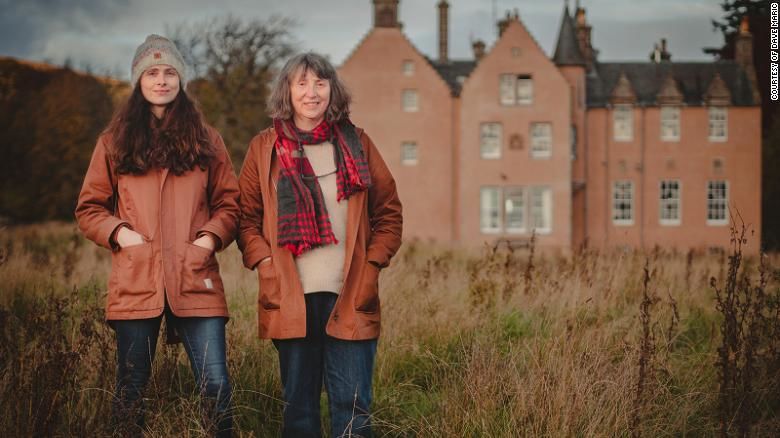 Mother-and-daughter team Louise and Sophie Ramsay are looking to rewild the Bamff estate, which has been in the family since 1232.

But while the beavers have already transformed the landscape, the Ramsays are intent on making it even wilder. Last year, they announced a "wildland project", which aims to transform 12 fields and six woods across 450 acres into an interconnected, self-sufficient area where cattle, pigs and ponies roam free.

The Ramsays hope that by surrendering to the wild land that has historically been used for farming, plantations and sports such as pheasant and grouse shooting, they can help to restore biodiversity, sequester carbon and mitigate impacts of climate change like flooding and drought.

"When you have a patch of land like this, there's a chance to do something meaningful with it, however small," says Sophie.

The work at Bamff comes amid a wave of rewilding projects in Scotland. Dozens of private landowners and non-profits big and small have committed areas to land restoration in recent years. In 2018, the Scottish Rewilding Alliance (SRA), a coalition of more than 20 environmental organizations, was founded with the aim of uniting these efforts and securing government support.

The government has already committed to protecting 30% of Scotland's land for nature by 2030, but "protection" is not enough, according to Peter Cairns, executive director of Scotland: The Big Picture, one of the non-profits in the alliance.

"In some cases, you're protecting already severely degraded landscapes. If we could replace protection with restoration or recovery then it would be a commendable aim," he says.

The wolves and brown bears that roamed the rugged landscape thousands of years ago are long gone, as are herds of elk in the valleys and the lynx that prowled the heather. Forest that used to sweep across most of the country has also disappeared -- today, native woodland covers just 4% of land area.

Reintroducing lost species has long been a thorny issue, which comes down to the fact that lynx, wolves, bears and even beavers can't be confined to a given area, however big it is, says Cairns. 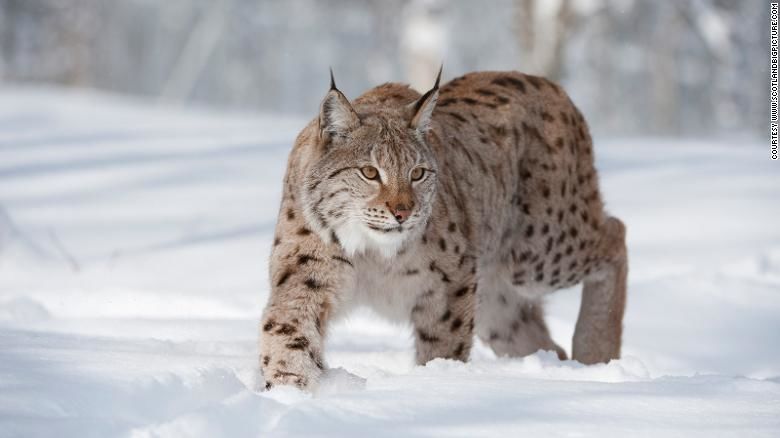 Some conservationists have called for the wild lynx (pictured here in Norway) to be released back into the Scottish Highlands, where it once roamed free.

"The decision is not down to one landowner, it's down to the country," he adds. Currently the Scottish government states on its website that while it has successfully introduced white-tailed eagles in recent decades and is currently in the process of reintroducing beavers, it has "no plans to reintroduce lynx, wolves, bears or any other large carnivore species into Scotland."

There are huge efforts underway to bring nature back, and some do receive significant government funding -- for instance, Cairngorms Connect. The UK's largest land restoration project, it covers 600 square kilometers (230 square miles), stretching from the banks of the River Spey through expanses of open moorland, before rising up to alpine plateaus and the lofty heights of Ben Macdui, Britain's second highest summit.

The project unites four landowners, both public and private, with an ambition to expand woodland to its natural limit and restore peatland and floodplains over the next 200 years. Cairngorms National Park is the fifth supporting partner, as the whole project falls within its area.

Cairngorms Connect is one of the beneficiaries of the Scottish government's peatland scheme, which is investing £250 million ($320 million) in peatland restoration over the next 10 years. These boggy ecosystems make up a fifth of the Scottish landscape and store around 1.6 billion metric tons of carbon -- equivalent to more than 140 years of the country's greenhouse gas emissions.

"But many of them have been damaged," says Jeremy Roberts, program manager for Cairngorms Connect, "and when peatlands become eroded, the peat which is very carbon rich is exposed to the atmosphere, and therefore oxidizes and releases carbon dioxide."

But regenerating blanket bog takes time, as will replanting more than 13,000 hectares of woodland. This is why they've given themselves 200 years, says Roberts, but he hopes that sooner rather than later they will reach a tipping point where the peatlands can take care of themselves, and humans can step back.

Change is already visible. "I can stand in places now and see new woodland where there wasn't any -- tall trees that have grown 15 to 20 feet in the time I've been here," says Roberts. "That's quite remarkable."

The cost of nature

Roberts acknowledges that the size of Cairngorms Connect lends itself to funding. In 2019, the project was awarded a $5 million grant from the Endangered Landscapes Programme. For smaller estates like Bamff, it can be more of a struggle.

The Ramsays rely on ecotourism for most of their income, renting holiday cottages and yurts on site. The beavers are a huge draw. 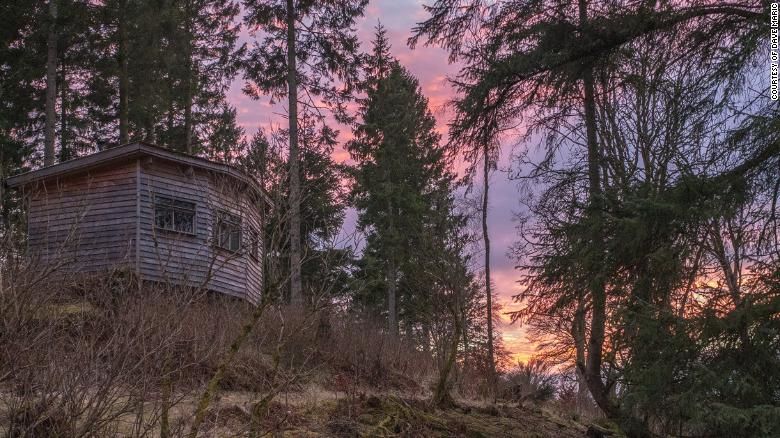 Guests can visit the beavers at Bamff and stay in cabins, yurts or cottages scattered around the estate.

For the wildland project, the family successfully raised more than £40,000 ($54,000) via crowdfunding, but Louise says this will not be nearly enough to cover the entire project. She urges the government to help incentivize rewilding and subsidize some of the initial costs.

At the Bamff estate, the goal is to ultimately relinquish control and leave the land to its own devices. "We learned with the beavers how we have to surrender and have faith in natural processes and their infinite complexity, and to recognize that it's not our job to control nature," says Sophie.

"That's the beauty of rewilding," she adds. "There's a fragility in it and an understanding that this stuff is bigger than us."

Correction: This story has been corrected to clarify that the beavers were released into the Bamff estate and are establishing themselves in the wild.