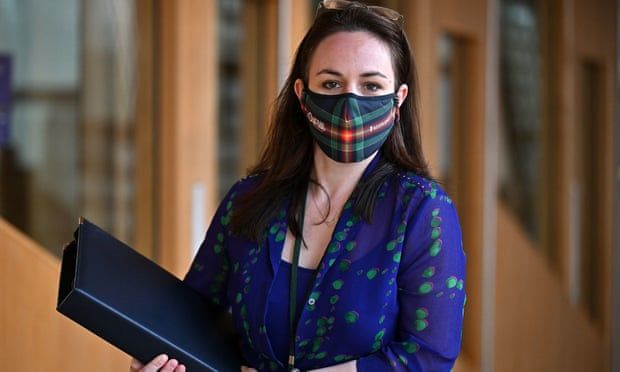 Kate Forbes told Holyrood on Thursday the Scottish government would give £150 to all households that get a council tax reduction and also homes in bands A to D not covered by that rebate from April.

Alongside £10m to help households rationing fuel use or facing disconnection, she said these measures would help 1.85m households or 73% of Scotland’s homes. Its £290m cost is funded by the Treasury after Rishi Sunak announced a £150 council tax rebate for bands A to D to tackle the fuel costs crisis in England.

Forbes, who is due to become the first Scottish cabinet secretary to take maternity leave, said it was an imperfect solution since some homes which were not in fuel poverty would get the rebate.

“But it is the only route we have to make sure we reach those for whom it will make a difference, quickly and simply,” she said.

But her measures were roundly condemned by prominent anti-poverty charities that often work closely with Scottish ministers. They said it was “deeply disappointing” Forbes had mimicked Sunak’s measures rather than taking radical and targeted action.

Claire Telfer, for Save the Children, added: “A 54% increase in energy bills is a terrifying prospect for households on low incomes. Millions of parents will be lying awake tonight trying to figure out how to keep their families afloat. The steps announced won’t entirely ease those fears.”

Scotland has the highest levels of fuel poverty in the UK: nearly 900,000 homes are forecast to suffer fuel poverty this year due to soaring energy prices, with nearly 600,000 in extreme fuel poverty. The measures are based on a home’s energy inefficiency and if spending on fuel bills leaves people with an income below the poverty line. Campaigners believe around half of homes in the Western Isles will be affected.

Scottish Labour’s Paul Sweeney said that given inflation, tax bills and other costs were soaring, the offer was “timid, regressive and unambitious, and won’t do anything nearly enough to address the cost of living crisis”.

He said the measures failed to address the funding crisis for councils, which deliver the bulk of these services. Ministers had the money and powers to greatly increase funding, such as a £400 winter fuel payment and top-up the Scottish welfare fund, he said.

Frazer Scott, the chief executive of Energy Action Scotland, said the Treasury’s funding was inadequate but he castigated the Scottish government’s failure to better target help at the 600,000 households in extreme fuel poverty.

“People will be forced to choose between heating and eating,” he said. “The very real tragedy is the declining health and wellbeing and excess deaths attributable to fuel poverty.”

Chris Birt, for the Joseph Rowntree Foundation, said: “This was a chance to do something different to the UK government, whose response the Scottish government rightly called ‘wholly inadequate’ just this weekend, and it is hard to understand why that chance wasn’t taken.”

Forbes insisted the Scottish government was already spending significant sums on anti-poverty measures, despite its limited powers, including £41m on winter support for food and fuel costs; £10 a week for eligible children under six; £69m on low income families hit by the pandemic,and discretionary housing payments of £80m.
Add Comment