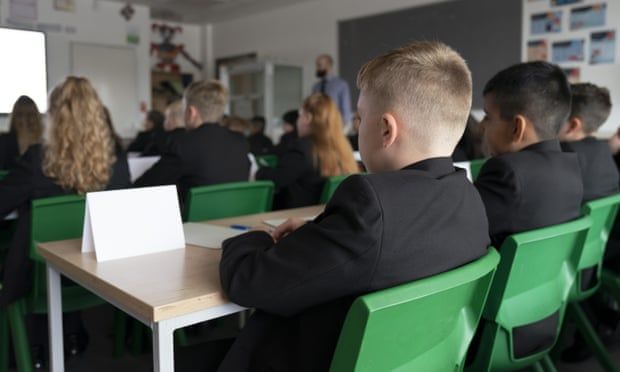 Unions say figures showing teacher and pupil attendance dropping are reminder virus has not gone away
School attendance in England has fallen to the lowest level since January, according to the latest government data.

Nearly one in five secondary pupils was off last week, while teacher absences are also on the rise, figures show.

Staff absence has also increased, with 8% of teachers and school leaders off work, up from 6.5% on 23 June.

Although the fortnightly figures, published on Tuesday by the Department for Education (DfE), no longer include details about Covid-related absences, infections thought to be driven by subvariants of Omicron are rising across the country.

Some schools are reintroducing masks in shared spaces and one-way systems to try to curb the spread of the virus, while concerns grow about the impact on staff attendance and how infections might spread at the start of the next academic year.

Geoff Barton, the general secretary of the Association of School and College Leaders, said: “We are picking up sporadic examples of schools struggling to cover classes, reintroducing some social distancing measures and encouraging face coverings in social areas. It is a reminder of how in some areas, Covid has most certainly not gone away.”

The figures, which have been adjusted to exclude year 11 and 13 students who are sitting exams, represent the lowest level of attendance since 28 January, when 85.3% of pupils were in school.

Paul Whiteman, the general secretary of the National Association of Head Teachers, said: “While the summer holidays are coming up soon, there is already worry about the autumn and winter. We need a proper plan for how to live with it long-term that is focused on keeping levels low and reducing disruption.”

Kevin Courtney, the joint general secretary of the National Education Union, said: “The current Covid wave is occurring during mid-summer, when classroom windows are open and still the absence rate is high. This is a wake-up call.”

According to data published by the Office for National Statistics, primary and secondary school pupils were more likely to have a positive Covid test in the spring term this year (16.1% and 27% respectively), compared with last autumn (14.2% and 21.5% respectively). Testing and reporting patterns have, however, changed over time, complicating the overall picture.