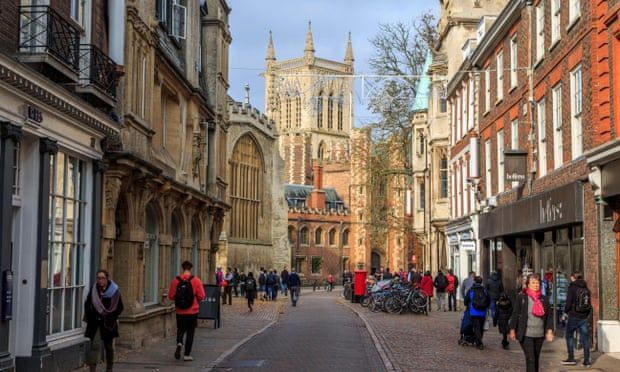 Many studying here are anti-Putin, but still feel they’re being judged for the Kremlin’s actions

Since her country invaded Ukraine, Lydia, a 21-year-old Russian student at a university in London, has tried not to speak much on campus. She fears if fellow students hear her accent they will blame her for a war she vehemently opposes.

Like many Russian students who have left the country to study here, she does not support Putin or his regime. Her friends in Russia are risking imprisonment by protesting against his war. But she worries her classmates won’t understand. When last week her lecturer talked about the invasion she “felt ashamed and wanted to disappear”.

“I don’t have anyone to talk to who shares my experience. I feel isolated,” Lydia told the Observer. She surrounded herself with only English-speaking friends when she moved to the UK so she would learn the language faster, but now feels they wouldn’t understand how she is feeling.

“I don’t want to burden my parents because they are already anxious enough about not being able to send me money because of the sanctions,” she said.

Universities say that although their priority must be supporting their Ukrainian students, they are also reaching out to Russian students, such as Lydia, who may be feeling alone but unable to ask for help.

Vivienne Stern, head of the international arm of vice-chancellors’ group Universities UK, said universities are offering emotional support to “extremely distressed” Ukrainian students, as well as help with money problems, visas, and advice on trying to bring parents to the UK.

But she said many are also “proactively getting in touch” with all students from Russia and Belarus to understand their situation and offer support.

She added: “There have been rumours circulating suggesting that universities have been expelling Russian students. But all I have heard is universities doing the opposite and reaching out to ​understand how they may be able to help.”

Prof Colin Riordan, vice-chancellor of Cardiff University, said his university is offering its Ukrainian students “as much support as we can”, but also calling every Russian and Belarusian student to check they are OK. Some were relying on roubles they can no longer access, he said.

“We have a duty to all our students wherever they are from, and you can’t make students responsible for the actions of their president,” he said.

Dr Olga Petri, a geography researcher from Russia based at Cambridge University, said: “There is no equivalence between the suffering of Ukrainians and what Russian students in the UK are experiencing. But it is important to remember that these students are probably cut off from their families and may be feeling very alone.”

She was pleased that Cambridge’s vice-chancellor sent out a message to all staff and students last week, offering help to Ukrainians but also acknowledging that Russian students and staff would be affected too.

She added: “I feel lonely and guilty. My family is safe and not under bombs, but I feel my country is going through darkness. I expect a new iron curtain will fall on Russia.”

Tatiana, a Russian PhD student at Cambridge, said although her friends and supervisor have been supportive she is struggling with “the horror of war and all the uncertainty of what is going on in Russia”.

She is frightened for her parents, who are currently debating whether to stay in Russia. If they don’t leave she fears the borders will close and she will be unable to see them for a long time.

She said: “My parents feel a moral responsibility to protest against the war but it is very dangerous. I am protesting in Cambridge but I am safe. I don’t go out on the streets and wonder if I will be tortured or put in prison for 15 years for opposing the government.”

Some Conservative MPs last week called for the children of Russian oligarchs to be banned from studying at private schools in the UK. There have been similar calls on social media for all Russian students to be expelled from universities in the UK and the US.

Paul Nightingale, professor of strategy at Sussex’s University’s Science Policy Research Unit, and formerly head of special projects at the government’s Economic and Social Research Council, said all universities should “certainly be kicking out the children of oligarchs and their extended families”.

But, he said: “It is stupid to say we should expel all Russian students. The ones in the UK are mostly anti-Putin. We have to support the people who will turn Russia around in the future.”

Prof Steve West, president of Universities UK, said: “We will support all of our students wherever they are from. Education brings us together and creates better understanding. Leaders focused on destroying that must be stopped.”