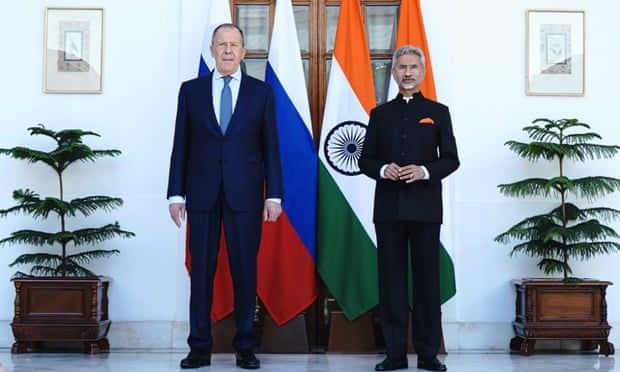 Russia and India will find ways to trade despite sanctions, says Lavrov

Lavrov, who is visiting the country, predicted Moscow and Delhi would find ways to circumvent “illegal” western sanctions and continue to trade.

Modi had not met the string of other foreign ministers to arrive in Delhi in recent days, including the UK foreign secretary, Liz Truss, and the Chinese foreign minister, Wang Yi, so Lavrov looks to have been singled out for attention by the Indian leader.

India has abstained from successive United Nations resolutions censuring Moscow, calling only for an end to violence, and has increased its oil purchases from Russia, its biggest supplier of arms.

Truss, in India on Thursday, had tried to cast the battle as one between democracies and autocracies, but India, the world’s most populous democracy, does not seem willing to accept this, especially if it requires India to break with Russia on issues such as arms sales and a future realignment of the global security architecture in which the US has a less prominent role.

Lavrov said: “These days our western colleagues would like to reduce any meaningful international issue to the crisis in Ukraine … [We] appreciate that India is taking this situation in the entirety of facts, not just in a one-sided way. I can only say that the balanced position of India which is not influenced by blackmail or diktat methods inspires our respect.”

Lavrov also claimed Ukraine was showing increasing understanding that joining Nato was not an option. “Friendship is the key word to describe the history of our relations, and our relations were very sustainable during many difficult times in the past,” he said.

His Indian counterpart, Dr S Jaishankar, reiterated “the importance of cessation of violence and ending hostilities” and said: “Disputes should be resolved through dialogue and diplomacy.”

Lavrov said Russia’s military offensive in Ukraine was not “just about Ukraine, its neutrality”, but rather a “question of world order”. He suggested that the US had now suppressed all attempts at establishing autonomy by Europe, with the latter now completely in lockstep with Washington, a status to which he said Europe was reconciled.

In words designed to attract approval in India, he said the west’s real endgame was the re-establishment of a unipolar world.

Lavrov said the US and its allies were trying to conceal their true objectives, portraying their confrontation with Russia and some other nations as a “battle between democracies and autocracies”. However, according to the Russian foreign minister, the west itself has become one big autocracy with the US at the helm.

But there are also tensions in the relationship between India and Russia. Western financial sanctions have reportedly made it difficult for India to pay Russia for imports including arms, oil, rough diamonds and fertilisers. Russia has written to India’s defence ministry requesting clearance of back payments worth $1.3bn, according to the Economic Times newspaper.

India and Russia have been working on a rupee-rouble mechanism to facilitate trade and get around western sanctions on Russian banks, according to media reports. Lavrov told reporters he was confident the two countries would find a solution.

“Many years ago we started moving in our relations with India, with China, with many other countries from using dollars and euros to more and more use of national currencies. Under these circumstances this trend I believe will be intensified,” he said. “We will be ready to supply to India any goods which India wants to buy … and I have no doubt that a way will be found to bypass the artificial impediments which illegal unilateral sanctions by the west create.”

Lavrov arrived in Delhi on Thursday from China, where he had hailed Beijing as part of a new “multipolar, just, democratic world order”.

India shares western alarm over China’s growing assertiveness in the Indo-Pacific region, and is a member of the so-called Quad alliance with the US, Japan and Australia.

The US is pushing the argument that Russia will end up the junior partner in its relationship with China and that the more leverage China gains over Russia, the less favourable that is for India.
Add Comment