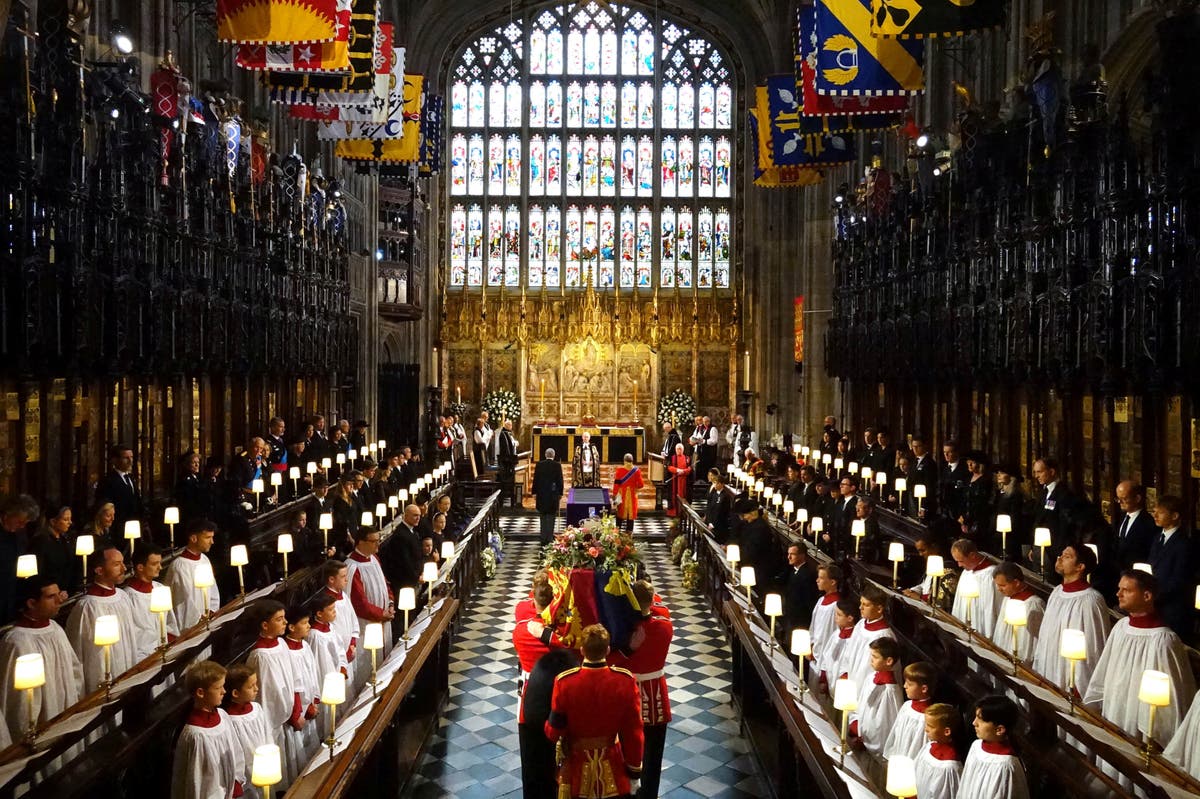 Royals’ private goodbye to the Queen at Windsor

King Charles and members of the royal family gathered to say their final farewells to the Queen as she was laid to rest beside her “strength and stay” Prince Philip on Monday evening.

The burial service was held privately in the King George VI Memorial Chapel at Windsor Castle, the royal family confirmed in a statement.

Her coffin was lowered into the royal vault 16ft beneath St George’s Chapel following a committal service.

King Charles stood shoulder to shoulder with his closest family members for the hour-long service.

As many as 800 mourners filed into the gothic chapel where the Queen stood little more than a year ago to bury her husband.

The Duke and Duchess of Sussex took their seats beside Prince William and Princess Kate, as well as their children George, nine, and seven-year-old Charlotte.

The service was conducted by the Dean of Windsor, with prayers said by the Rector of Sandringham, the Minister of Crathie Kirk and the Chaplain of Windsor Great Park.

Following the penultimate hymn, the imperial State Crown, Orb and Sceptre were moved from the Queen’s coffin to the altar.

The King then draped the Queen’s Company Camp Colour of the Grenadier Guards on the coffin before the Lord Chamberlain broke his Wand of Office, marking the end of his service to the sovereign.

The Dean said a psalm and the Commendation while the casket disappeared from public view for the last time.

A lament was played by the Sovereign’s Piper and the Archbishop of Canterbury Justin Welby pronounced the blessing, before the congregation sang the national anthem.

The Queen’s coffin arrived at the Castle after being taken in a hearse scattered with flowers thrown by her beloved subjects on a final procession.

Earlier, tousands of mourners packed pavements across the capital as the UK said “thank you” and “goodbye” to its Queen at a state funeral at Westminster Abbey.

Hundreds of heads of state from across the globe were in attendance, including US President Joe Biden, French President Emmanuel Macron and Japan’s Emperor Naruhito.

During his sermon, the Archbishop of Canterbury told the congregation the outpouring of emotion for the Queen “arises from her abundant life and loving service, now gone from us”.

Mr Welby, standing in the church where kings and queens have been crowned since 1066, also said that the Queen had declared on her 21st birthday “that her whole life would be dedicated to serving the nation and Commonwealth”.

He added: “Rarely has such a promise been so well kept. Few leaders receive the outpouring of love we have seen.” 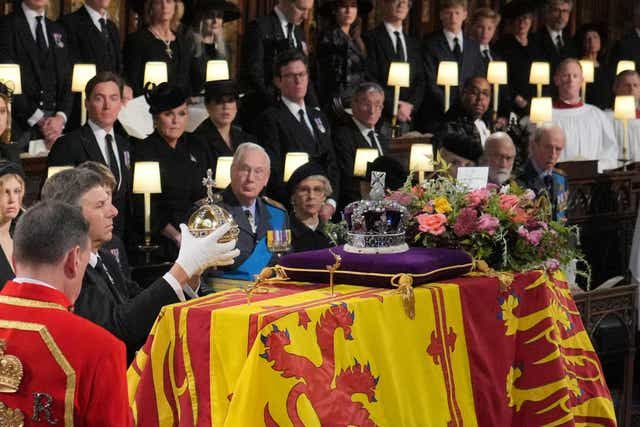 The Orb and Sceptre are removed from the coffin at the Committal Service for Queen Elizabeth II, held at St George’s Chapel

After her State Funeral at Westminster Abbey, the late monarch’s coffin was borne on the State Gun Carriage, for a final journey pulled by Royal Navy ratings to Wellington Arch.

The procession, involving more than 3,000 members of the armed forces and on a scale of pageantry not seen since the funeral of King George VI in 1952, set off from the abbey at around 12.15pm.

As it moved past the Cenotaph, the King, the Prince of Wales, the Princess Royal and the Earl of Wessex saluted the memorial to Britain and the Commonwealth soldiers killed in the First and Second World Wars.

The coffin was followed by King Charles, the Princess Royal, the Duke of York, the Earl of Wessex, the Prince of Wales, the Duke of Sussex and other members of the Royal Family. It passed down through the Mall and into Apsley Way before arriving at Wellington Arch shortly before 1.30pm.

At Wellington Arch, the coffin was lifted off the gun carriage and placed in the state hearse, which set off for Windsor as the parade gave a royal salute and the national anthem was played. 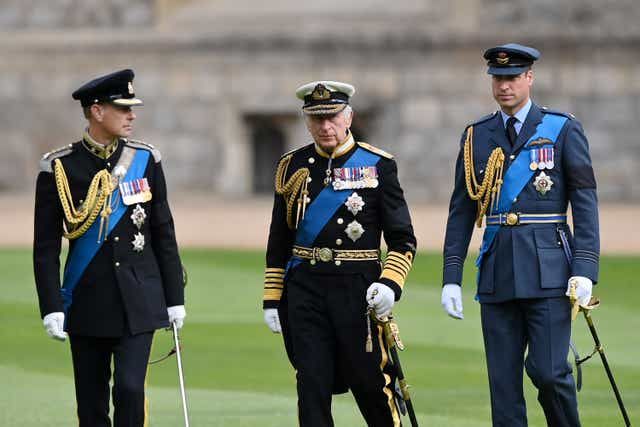 Crowds lined the Long Walk as the procession brought the Queen’s coffin to Windsor Castle.

Waiting for the service to begin, the congregation may have reflected on the fact that in this gothic chapel, steeped in history, the Queen experienced some of life’s happiest and saddest moments.

And the castle, just a short walk up the hill, is where she spent most of her time in her later years.

During the Covid pandemic, the Queen was ensconced in the ancient royal fortress with the Duke of Edinburgh.

Philip’s funeral was held when coronavirus restrictions were in place in April 2021 with the numbers strictly limited and the final farewell taking place entirely within the confines of the castle.

The image of the Queen sitting alone in St George’s Chapel, socially distanced from her family as she mourned, became one of the defining images of the pandemic.

Funerals such as those of Princess Margaret and Princess Alice, Duchess of Gloucester, have also taken place in the chapel which is situated in the lower ward of Windsor Castle’s precincts and is already the resting place of 10 monarchs.

The funeral of the Queen’s father, King George VI, was also held at Windsor. In May 2018, Prince Harry married Meghan Markle - now the Duke and Duchess of Sussex - in a glittering ceremony.

Before the turn of the century, the Earl and Countess of Wessex tied the knot in St George's in June 1999.

A few years later, in 2005, a service of dedication and prayer was held in the Chapel following the marriage of the King and the Queen Consort.

It was where Harry was baptised and where his brother William, now the Prince of Wales, was confirmed. 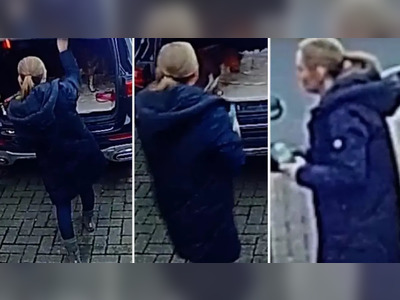