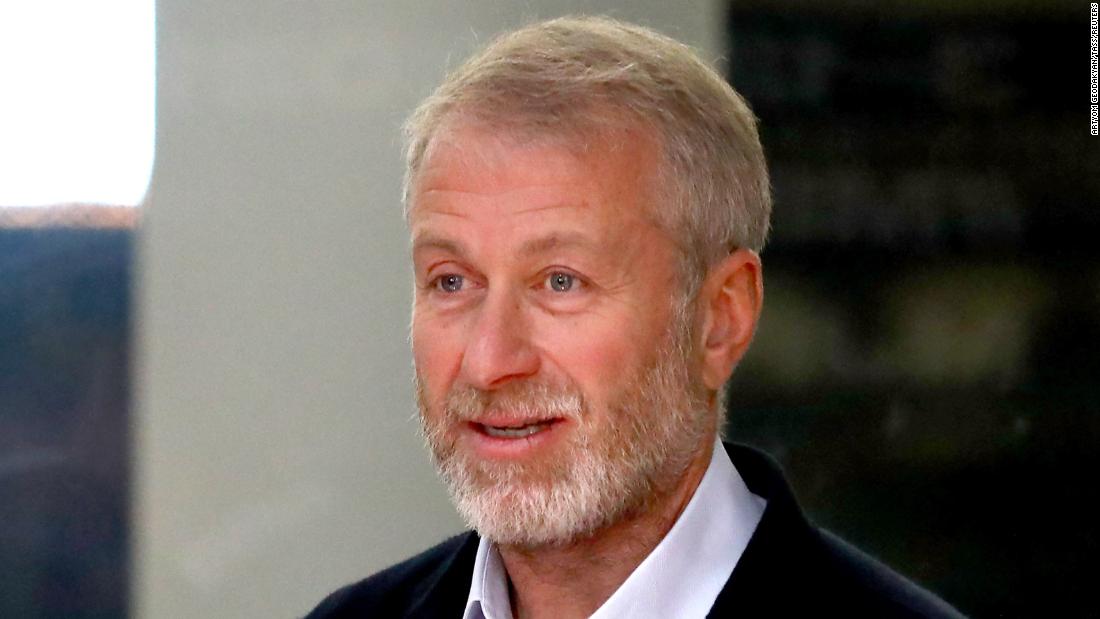 For almost 20 years, Roman Abramovich rocketed Chelsea from a club on the periphery of the elite to a global football superpower, but Russia's invasion of Ukraine has resulted in his reign coming to an abrupt end.

Bloody conflict in Ukraine and international outrage over Russia's invasion placed a renewed focus on Abramovich and his ownership of Chelsea.

It's a focus that has shone a light on the jarring friction between sport and politics: Abramovich the dream-realizing football owner -- adored by much of the Chelsea fanbase -- versus Abramovich the Russian oligarch.

Days after the war began, as the West responded by imposing sanctions on Russia and its oligarchs, Abramovich's assets -- including Chelsea -- appeared increasingly vulnerable to a more punitive financial environment and he soon announced his plans to sell the club.

Before the sale could be completed, however, the UK government announced that Abramovich would be subject to sanctions as one of "Russia's wealthiest and most influential oligarchs, whose business empires, wealth and connections are closely associated with the Kremlin."

On Saturday, the English Premier League's board disqualified Roman Abramovich as a director of Chelsea.

The disqualification of an owner would normally trigger the sale of their shareholding, though in the case of Abramovich the Russian oligrach had already announced his intention to sell the club and that process is underway.

The UK government is open to Chelsea's sale and would consider an application for a new licence to allow for a sale to take place, a spokesman for Prime Minister Boris Johnson said on Thursday.

Chelsea will be somewhat shielded from the sanctions, allowed to continue fulfilling its fixtures under a special license. But it does mean the club is not able to sell merchandise or tickets to upcoming games, engage in the transfer market, or issue new contracts to players.

Last month British lawmaker Chris Bryant called for Abramovich to lose ownership of Chelsea after seeing a leaked 2019 UK Home Office document that flagged concerns the 55-year-old had "links to the Russian state and his public association with corrupt activity and practices," the MP said in Parliament.

According to Reuters, Abramovich has been granted Portuguese and Israeli citizenship in recent years.

"Surely, Mr. Abramovich should no longer be able to own a football club in this country?" Bryant said.

Abramovich's representative did not respond to CNN's request for comment on the oligarch being sanctioned.

Chelsea has enjoyed an unprecedented period of success since his $233 million acquisition of the club in June 2003.

"I don't want to throw my money away," Abramovich told the BBC following the takeover, "but it's really about having fun and that means success and trophies."

During the 19 years under Abramovich, the club has collected 21 major trophies, according to Chelsea. After winning the FIFA Club World Cup in Abu Dhabi last month, Chelsea has officially won ever major trophy at the club's disposal.

It is gratitude for this golden era that underpinned a sweeping tide of adulation for the oligarch upon the announcement of his impending sale of the club, among fans as well as former players.

"The best," former captain John Terry tweeted, accompanied by a picture of him and Abramovich celebrating another Premier League triumph in 2017.

A statement from the Chelsea Supporters Trust (CST) board encapsulated the broader outpouring of feeling among the club's fans on social media, thanking Abramovich for "his affection, passion and dedication" during a tenure that brought "unparalleled success."

"Chelsea supporters will never forget all he has done for our club. Thank you Mr Abramovich," the statement added, published before the UK government announced the sanctions.

According to Richard Weekes, who is one of the founders of Chelsea supporters' group 'We Are The Shed,' "the Roman Empire" helped realize supporters' wildest dreams.

"The last 20 years has enabled Chelsea supporters to live their best lives," Weekes told CNN before Abramovich would be sanctioned.

"Traveling around the world winning and celebrating the biggest prizes in football, you simply cannot ask for more than that and, for that reason, Roman will forever have a place in all Chelsea supporters' hearts.

"To have 'the Roman Empire' come to an end with Chelsea as 'Champions of the World' could not be a more fitting conclusion to this chapter in our history." 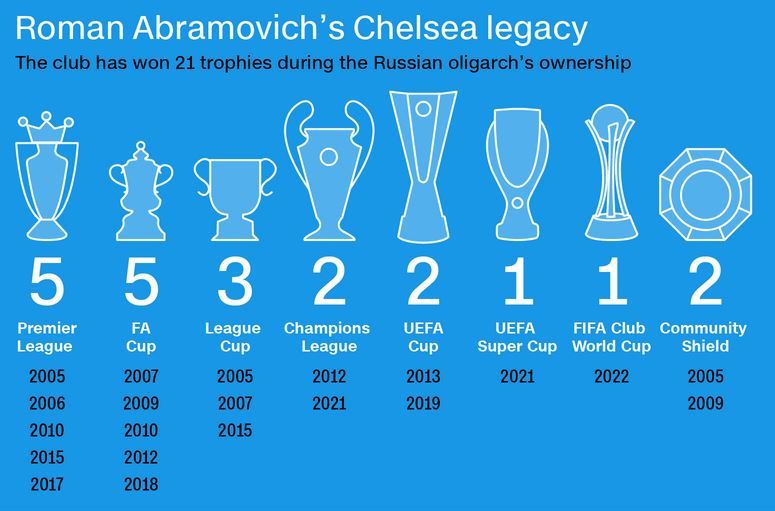 If the last 19 years have been jam-packed with golden memories and trophy after trophy, the coming days and months look more uncertain.

In light of the sanctions placed on Abramovich and the consequential impact on Chelsea, the club released a statement confirming it would seek "permission for the licence to be amended in order to allow the Club to operate as normal as possible."

Amid such turmoil, the CST called for the voices of supporters to be heard.

"Supporters MUST be involved in any conversation regarding ongoing impacts on the club and its global fanbase," the group said in a statement on Twitter.

"The CST implores the Government to conduct a swift process to minimise the uncertainty over Chelsea's future, for supporters and for supporters to be given a golden share as part of a sale of the club." 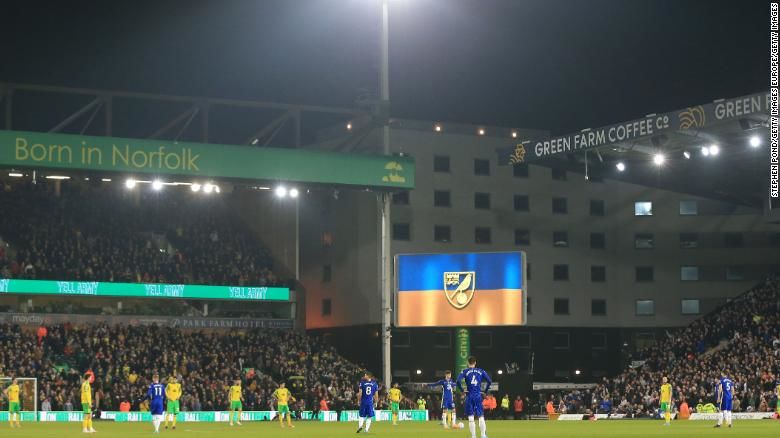 The sanctions also prevent a sale of the club, pending the issuance of a special license.

In his initial statement published on the club's website before he was sanctioned, Abramovich said the net proceeds from the sale will be donated to a foundation set up "for the benefit of all victims of the war in Ukraine."

That statement was conspicuously vague regarding who specifically might be a victim; Abramovich's critics pointed out that the wording could also allow his new foundation to support the families of Russian soldiers.

"Roman Abramovich is very sensitive to what is happening now," Mikhail Khordokovsky, an exiled oligarch and Putin critic, told CNN before the recent sanctions were announced.

"I don't have any information, but I can't imagine that he's made any decision without first consulting with Putin.

"Regardless, this means that he's gotten a whiff of scorched air. What he smells is the fire burning under President Putin," Khodorkovsky said, referring to Abramovich's plans to sell Chelsea.

In 2018 the US Treasury released the names of 210 prominent Russians, dubbed the "Putin list."

The administration was required to name the companies and individuals and consider whether to sanction them under legislation meant to punish Russia for its interference in the 2016 US election, as well as its human rights violations, annexation of Crimea, and ongoing military operations in eastern Ukraine.

But if Abramovich's current wealth and apparent safety in Russia reflect an affinity with Putin, that may have been what put him at risk with the UK government.

Abramovich made his fortune in steel and investments, taking advantage of the mass privatization that characterized Boris Yeltsin's premiership following the fall of the Soviet Union.

Abramovich's wealth, valued at $14.5 billion in 2022 by Forbes, led to influence within Russian political circles as he was first elected to the State Duma and then appointed governor of Chukotka from 2000 to 2008.

While Weekes admitted that the incoming owner's status as an oligarch had played on his mind back in 2003, he added that fans would have had little power to reverse the takeover regardless of their feelings.

"Chelsea fans did not choose to be bought," Weekes said, "it is unlikely any pushback would have changed the decision at the time had we stopped to think about the morality behind it.

"Today people are more prepared to look into things a little deeper, to understand right from wrong and, with regards to a football club, have the desire to know that who is representing their team suits their ideologies and beliefs. This is a good thing.

"Only time will tell if our feeling towards his character will change but, for now, there is no denying the happiness he brought to Chelsea supporters during his time here and for that we are thankful."

This schism between appreciation and criticism manifested itself in Chelsea's league fixtures at Burnley on March 5 and at Norwich City on March 10.

As a minute's applause was held in tribute to Ukraine before the Burnley game, chants of Abramovich's name could be heard on a Sky Sports broadcast before being drowned out by boos from the stands.

The chants drew reproach from Chelsea manager Thomas Tuchel after the game.

"If we show solidarity, we show solidarity and we should do it together. We take the knee together, if an important person from other clubs or from our club unfortunately dies, we show a minute of respect," Tuchel told reporters after the game, which Chelsea won 4-0.

"It's not the moment to give other messages, it's a moment to show respect. We do this because this is what we are also as a club, we show respect as a club.

We need our fans to commit to this minute of applause in the moment.

"We do it for Ukraine, there is no second opinion about the situation there. They have our thoughts and our support, and we should stand together as a club." 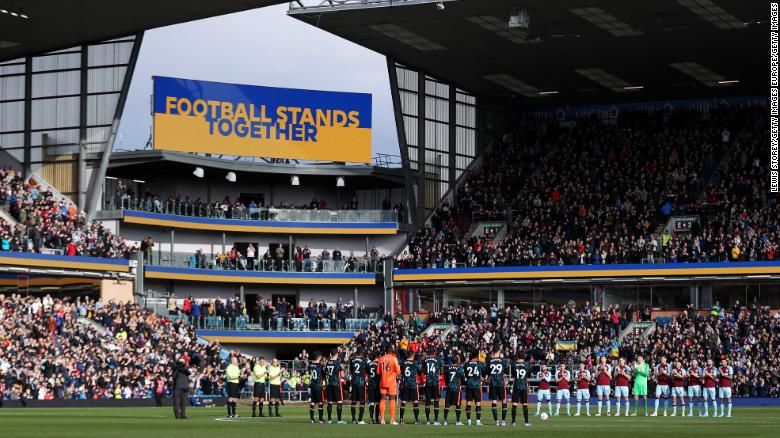 Players, officials and fans took part in a minute of applause to indicate peace and sympathy with Ukraine before Burnley faced Chelsea.

Beyond this mixture of sentiment among fans is an equally strong feeling of anxiety. Rumors of potential buyers continue to abound, but as yet it remains to be seen when the club's future will be clarified.

Who will the new owner be? Will they be capable or willing to invest the same funds as Abramovich? Would they try to move Chelsea away from Stamford Bridge?

After almost two decades of looking ahead to nothing but success, these questions and more have Weekes' mind "whirling."

"In the end Roman explicitly outlined that owning Chelsea was never for financial gain, will the new owner fell that way? Unlikely," Weekes said.

"That is worrying, as, on top of everything, it might be the supporters that end up paying the price."