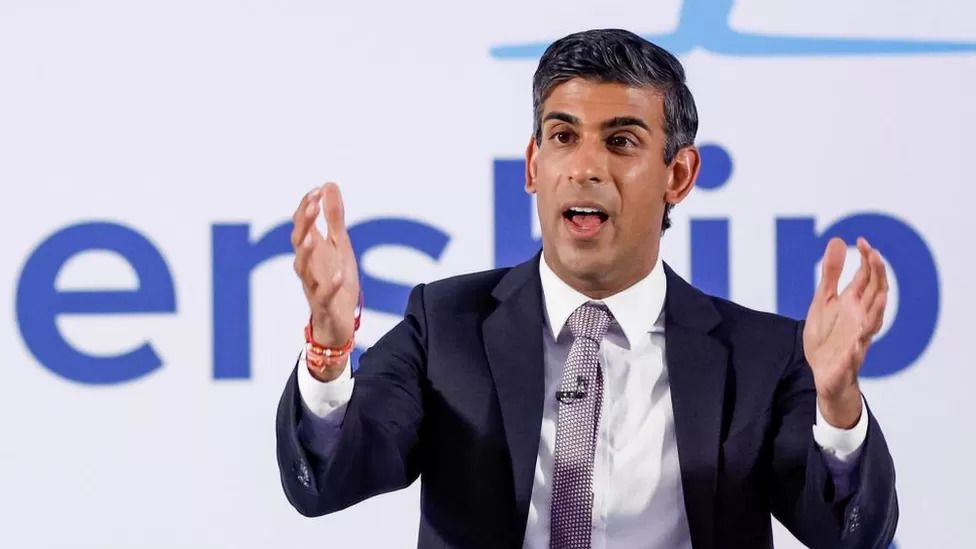 Rishi Sunak will review the pledges he made during his summer Tory leadership campaign, No 10 has said.

The prime minister will examine "whether now is the right time to bring them forward," his spokeswoman said.

Mr Sunak lost to Liz Truss in a ballot of Tory members - but was selected to replace her by Tory MPs when her premiership fell apart.

He announced dozens of policies during his summer campaign, including tax cuts.

But his spokeswoman said the economic "context" had changed since the promises were made.

"We need to take some time to make sure what is deliverable and what is possible," she added.

Unlike his summer campaign, Mr Sunak did not make any policy pledges during the four-day contest to replace Ms Truss as prime minister last month.

His earlier campaign promises included pledges to scrap the 5% VAT rate on household energy bills, and to lower the basic rate of income tax from 20% to 16% before the end of the next parliament.

Mr Sunak also promised to keep April's 1.25p in the pound rise to National Insurance - currently due to be reversed on Sunday in the wake of Ms Truss's mini-budget in September.

He also pledged to place an annual cap on the number of refugees the UK accepts, tighten asylum qualification criteria, and withhold aid from countries that won't take migrant returns.

At Prime Minister's Questions, Mr Sunak sought to reassure his backbenchers that migration was a "priority" for him, as he faced questions over the government's record on asylum claims.

Afterwards the PM's spokeswoman said Mr Sunak remained "committed to the sentiment" of his migration pledges, but confirmed they would form part of the review.


*  preventing solar panels being installed on "our best farmland"

The prime minister has already abandoned his campaign pledge to fine patients in England £10 if they miss GP or hospital appointments.

He has also restored the ban on shale gas fracking in England that was lifted by Ms Truss. During the summer, he said he supported fracking where projects had local consent.

The policy review comes as Mr Sunak and Chancellor Jeremy Hunt consider tax increases and spending cuts ahead of a budget on 17 November.

Ahead of the statement, the Treasury has been warning that across-the-board tax increases will be required to ensure the government meets its medium-term targets on spending and debt.

Reports have suggested Mr Hunt could extend a freeze on income tax thresholds, as well as the windfall tax on oil and gas firms.

Ministers have also not ruled out real-terms cuts to pensions and benefits by raising them below the rate of inflation, a move that could save billions.

The government is considering delaying the introduction of a £86,000 lifetime cap on social care costs due to apply in England from October 2023, a government source told the BBC.

The plan includes a more generous means-test for people applying to their local council for financial support.

Groups representing local authorities have been calling for a delay to the introduction of the cap, with warnings of acute staffing and financial pressures on services.

Sir Andrew Dilnot, the architect of a previous cap that was abandoned in 2017, said it would be "astonishing" if the government did delay the cap.

He told BBC Radio 4's World at One it might save money in "the very short term" - but would make no difference to the public finances in the long term if it was eventually applied anyway.