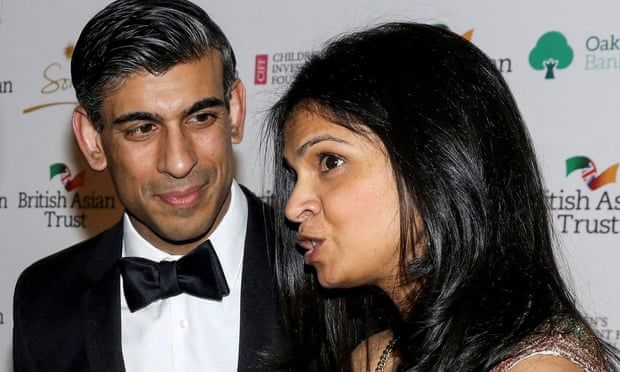 Akshata Murty, the daughter of an Indian billionaire, married Sunak in 2009. She owns shares in dara5, a London-based investment firm cofounded in 2019 by a member of Qatar’s ruling Al-Thani family. The shareholding, via her Catamaran Ventures UK investment company, was first reported by Bloomberg on Tuesday.

Dara5 says on LinkedIn that it aims to provide a “global investment network for next generation family members, young investors & youthful entrepreneurs”. Nasser Al-Thani, “next gen family member of the Qatari Ruling Family” who studied international business management at Newcastle University, is a founding partner. According to his instagram account, he owns a large collection of supercars.

The multimillionaire co-founder of Lastminute.com Brent Hoberman is also an investor.

Filings at Companies House also show that Catamaran Ventures UK is a shareholder in the upmarket furniture marketplace The New Craftsmen. The company, which says it “curates, commissions and sells unique contemporary objects that are rooted in craftsmanship and narrative”, counts several well-known wealthy investors among its shareholders. Among them are Prudence MacLeod, the eldest child of Rupert Murdoch.

Murty set up Catamaran’s UK arm with Sunak in order to invest her private wealth. He transferred his shares to her in 2015, just before entering parliament, and she is now the sole owner. Through it she has invested in a clutch of startup businesses. Sunak declares his wife’s ownership of Catamaran on the list of ministers’ interests, but no detail is given of the businesses she holds stakes in.

The finances of Murty and Sunak have been thrown into focus following revelations in April that Murty had claimed non-dom status legally to not pay tax on annual dividends she receives from a £690m stake in the Indian IT company Infosys, founded by her billionaire father NR Narayana Murthy.

After mounting public outrage, Murty bowed to pressure to pay UK taxes, saying she realised many people felt her tax arrangements were not “compatible with my husband’s job as chancellor”.

The Infosys stake led Sunak earlier in May to become the first frontline politician to be ranked among the UK’s wealthiest people, only days after he warned consumers that “the next few months will be tough” as the cost of living squeeze intensifies.

After becoming chief secretary to the Treasury in July 2019, Sunak declared in the MPs’ register of interests that he had transferred his 50% stake in Catamaran Ventures to Murty when he became an MP in 2015. But he has not provide details of what Catamaran Ventures is invested in.