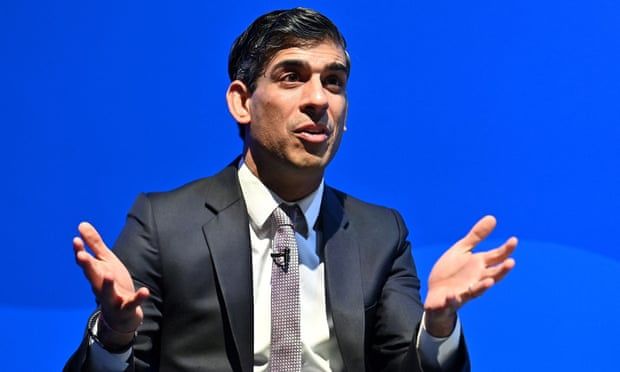 Figures could improve chances of tax cuts, but inflation drives up cost of government debt
Rishi Sunak has been handed a boost from figures showing lower government borrowing than official estimates on the eve of the spring statement.

The figures come despite a sharp rise in debt interest payments last month amid soaring inflation.

The Office for National Statistics said borrowing over the first 11 months of the financial year 2021-22 was £138.4bn, less than half the sum borrowed a year earlier and almost £26bn less than estimated by the Office for Budget Responsibility in October.

Analysts said the figures, helped by resilience in the jobs market after the end of furlough, could strengthen Sunak’s position at the spring statement to offer tax cuts or additional spending to cushion the blow from the big rise in living costs.

However, the latest snapshot showed a worsening picture for the public finances in February as the budget deficit – the gap between spending and income – came in at £13.1bn, the second-highest borrowing figure for that month since records began in 1993.

Inflation has pushed up interest payments on government debt by more than 50% to £8.2bn, the highest February figure on record. City economists had forecast a borrowing figure of about £8.1bn for the month.

Sunak is understood to have drawn up a range of options to help with the cost of living crisis, including a 1p cut to income tax, raising the national insurance threshold and a significant cut to fuel duty. However, he may use the February borrowing figures to insist on a more limited approach. Responding to the latest snapshot, the chancellor said it was now “more important than ever” to take a responsible approach to the public finances.

“With inflation and interest rates still on the rise, it’s crucial that we don’t allow debt to spiral and burden future generations with further debt,” he said. “Look at our record, we have supported people – and our fiscal rules mean we have helped households while also investing in the economy for the longer term.”

James Smith, the research director at the Resolution Foundation, said Sunak needed to take the opportunity to provide emergency support to families.

“The chancellor will approach the UK’s latest crisis – the tightest income squeeze in generations, exacerbated by the Russian invasion of Ukraine – with the public finances in better shape than expected, increasing the chance of significant policy action to support families through the tough year ahead,” he said.

Despite the hit from higher debt servicing costs, the recent rise for inflation is expected to have some benefits for the public purse. Government income from fuel duty and VAT on energy bills has increased over the past year, while Sunak’s plan to freeze the income tax personal allowance and higher-rate threshold over four years is expected to generate £21bn, more than double the amount budgeted for owing to rising inflation, according to the Institute for Fiscal Studies.

Despite the highest rates of inflation since the early 1990s, the government’s debt servicing costs as a proportion of national income remain low compared with recent decades.
Add Comment