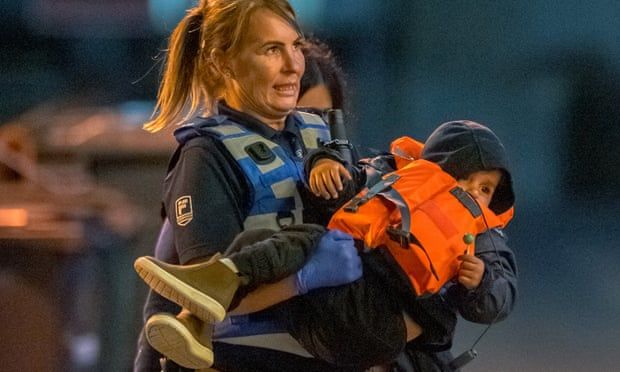 Home Office data shows majority of successful claimants arrived via small boats so may face prosecution
The proportion of asylum seekers being granted refuge in the United Kingdom has risen to a 30-year high, prompting renewed concern from refugee charities about recent changes to the system which will see many people criminalised or transferred to Rwanda.

New Home Office data shows that 75% of asylum claims in the year ending March 2022 were granted, with most claimants entering the UK via small boats or other irregular routes. This means they could face prosecution under the new Nationality and Borders Act, which was passed in April.

Dr Peter William Walsh, a senior researcher with the Migration Observatory at the University of Oxford, said: “This is a significant shift compared to a few years ago, when the majority of asylum applications were initially refused. This highlights that policies targeting asylum seekers will inevitably affect some people who would be granted refugee status if their claim was processed in the UK.”

The Home Office said the rise in approval rates was in part a consequence of Brexit, since this was the first year that officials have not been able to refuse asylum applications from people who travelled through other safe European countries before arriving in the UK. It also reflects a shift in the origin of applicants, with the majority of people now making their way from countries that typically have high approval rates, such as Syria, Eritrea and Sudan.

The increase in applications was “likely linked in part to the easing of global travel restrictions that were in place due to the Covid-19 pandemic, and to a sharp increase in small boat arrivals to the UK”, the Home Office report said.

The same data revealed that more than 1,000 Afghan nationals arrived by small boats in the first quarter of 2022, making up nearly a quarter of the small boat arrivals, suggesting that the Afghan resettlement schemes, which were launched last year after the fall of Kabul to the Taliban, are not offering enough support. Of the 4,540 people detected arriving by small boats between January and March 2022, 24% (1,094) were Afghan nationals. They represented the highest of any nationality recorded, followed by 16% who were Iranian (722) and 15% (681) Iraqi.

Enver Solomon, the chief executive of the Refugee Council, said: “This increase is the inevitable consequence of the restrictive nature of the Afghanistan resettlement schemes, for which the vast majority of Afghans are simply ineligible. The government must honour the promises they made to the people of Afghanistan by immediately ensuring the most vulnerable people in the country are able to access a safe route to the UK, so they are not forced to risk their lives in order to find safety here.”

Marley Morris, the associate director for migration with the IPPR thinktank, said: “The government has said it is giving Afghans a ‘warm welcome’, but these figures reveal that many have felt they have been left with no option but to take this dangerous route to make it to the UK. The government’s new plans in response to the Channel crossings could mean that Afghan asylum seekers will be sent to Rwanda. Contrary to the government’s claims, there are few safe routes for people forced into small boats to make it to the UK.”

The data also highlighted a backlog of about 110,000 unprocessed asylum cases, more than double the backlog at the end of March 2020. “This leaves thousands trapped in limbo, banned from working, living hand to mouth on less than £6 a day, and left not knowing what their future holds,” Solomon said.

A Home Office spokesperson said: “The UK has made one of the largest commitments to support Afghan refugees of any country, and will resettle up to 20,000 Afghan women, children and others at risk. The rise in dangerous Channel crossings is unacceptable. The Nationality and Borders Act will crack down on the evil people-smuggling gangs who are abusing our immigration laws.”
#Afghanistan  #COVID-19  #Covid
Add Comment