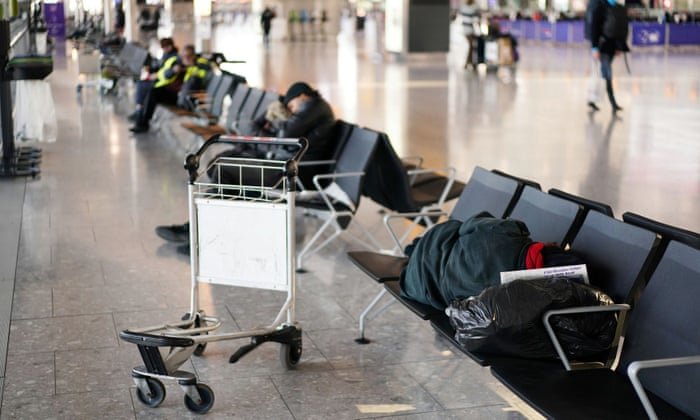 Number of homeless people taking refuge at airport doubles since lockdown began
Dozens of homeless people are sleeping at Heathrow airport after being denied emergency accommodation by councils despite promises from the government that all would be taken off the streets during the coronavirus pandemic, it has emerged.

Since the Covid-19 lockdown began, one of the rough sleepers, a professional woman in her 40s from west Africa who is trying to regularise her immigration status, said that the number in Terminal 5 had more than doubled. She said the rough sleepers were a mix of migrants and British citizens.

“I first started sleeping at the airport last October when I lost my accommodation,” she said. “There were 10-15 of us then. Now we have grown to about 30. We try to support each other by sharing food and things. We have approached different councils asking them to give us accommodation, just until the pandemic is over, but they have refused so we’re still sleeping at the airport.”

Hillingdon council is the closest local authority to Heathrow and some of the rough sleepers said they approached officials there for emergency accommodation during the pandemic but were turned away. A letter from the council’s chief executive, Fran Beasley, dated 16 April, states: “I can confirm that Hillingdon council has taken all necessary steps in assisting known rough sleepers as required and remains fully compliant with government requirements.”

This was written in response to a letter from several organisations expressing concern about the failure to help homeless people get off the streets during the pandemic regardless of their immigration status.

“The airport staff are kind to us as long as we behave ourselves,” said the woman sleeping at Terminal 5. “When the virus started the numbers sleeping at the airport grew and I started seeing a lot of unfamiliar faces. It is much safer here than sleeping outside. London is scary at the moment because it’s so empty.”

She said that she had approached several London boroughs including Hillingdon but had been denied accommodation. “If they can’t help us, they should let us stay at the airport,” she said. “The people sleeping here are very calm. They are not using drugs or alcohol. Some of us sleep on the floor. Some on the chairs. There are social distancing notices everywhere and we comply with them.”

A bulletin published on Tuesday from councils about support for migrants with no recourse to public funds during the pandemic says: “Providing additional support for residents is extremely challenging for councils and it is unclear to what extent the government’s Covid-19 emergency funding will adequately meet these costs.

“A consequence of the Home Office not relaxing restrictions on access to benefits during the pandemic for people subject to the ‘no recourse to public funds’ condition is that local government is likely to incur additional costs when accommodation and financial support needs to be provided.”

Fizza Qureshi, chief executive of the Migrants’ Rights Network, expressed concerns about physical distancing in inadequate spaces. She said: “We are extremely concerned that there are homeless people who are having to shelter in the airport because they have been turned away by local authorities ... The only thing that is heartwarming is that they are building their own community to lean on during this crisis.”

A Heathrow spokesperson said: “In line with government guidelines, Heathrow is applying the necessary social distancing measures at our airport, which sees us strictly limiting airport access to passengers, colleagues and those with a reason for entry. We are asking all other members of the public to leave to ensure their safety and the safety of others. All new arrivals at the airport who are struggling to find accommodation will be asked to return to their point of origin and contact StreetLink for support.”

Hillingdon council said: “The Ministry of Housing, Communities and Local Government is leading on rehousing the rough sleepers based at Heathrow airport. We have offered accommodation to all of the rough sleepers in other parts of the borough who we are in contact with.”

A government spokesperson said: “Over 90% of those known to be living on the streets at the start of the crisis have been offered safe accommodation - ensuring some of the most vulnerable people can stay safe during the pandemic. This remarkable achievement is the result of a collaborative effort across government and with local authorities, health providers and charities.

“This is backed by £3.2bn of government funding for local authorities as part of the wider government response to the coronavirus pandemic.”
Add Comment