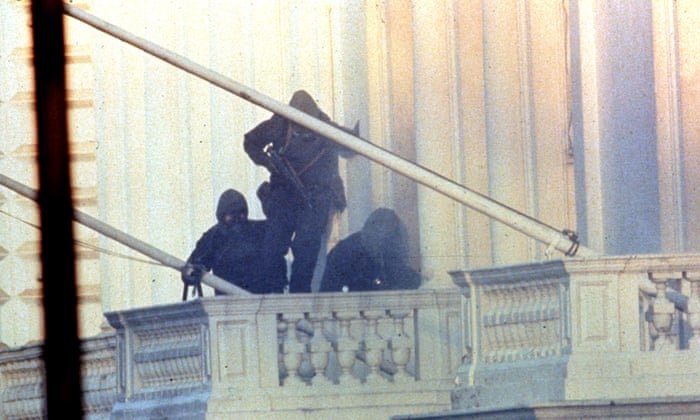 Keenie Meenie Services was active from Sri Lanka to Nicaragua – and Foreign Office could not rein it in, book claims
A British mercenary company established by former SAS veterans conducted clandestine and highly controversial operations around the world, with successive British governments either unwilling or unable to rein it in, a new book reveals.

Keenie Meenie Services (KMS) was one of Britain’s first mercenary companies, believed to have taken its name from Arabic slang for “undercover”. It was set up in the 1970s and recruited veterans battle-hardened by the Troubles in Northern Ireland, Operation Storm in Oman – when Anglo Omani forces quashed an uprising – and the 1980 siege of London’s Iranian embassy.

It won contracts with the Foreign Office to guard British embassies in global hotspots, as well as protecting Gulf royals, including Saudi Arabia’s oil minister Sheikh Ahmed Zaki Yamani and Sultan Qaboos bin Said of Oman who died earlier this month. The firm’s founding directors were so well connected that attempts in 1976 by the Labour prime minister Harold Wilson to ban mercenaries were thwarted amid Whitehall concerns about it going out of business.

Keenie Meenie: The British Mercenaries Who Got Away with War Crimes quotes declassified intelligence files that reveal the warning of one Foreign Office staffer: “If KMS were legislated away en passant no comparable substitute protection would be available to the diplomatic service.”

The Foreign Office’s Middle East department insisted that when it came to taking action against mercenaries “our firm preference is still for no legislation at all”, adding that civil servants should present to ministers “the benefits of doing nothing at all”.

As a result of lobbying from inside Whitehall, no legislation was passed against mercenary companies. In the aftermath, KMS took on increasingly daring contracts in Asia and Latin America during the Thatcher era. In Sri Lanka, it earned millions of pounds directing military operations and flying helicopter gunships on combat missions in which scores of civilians were killed. In 1985, the Foreign Office’s South Asia head noted in a memo: “We believe only KMS pilots are currently capable of flying armed helicopter assault operations in Sri Lanka.”

The book’s author, Phil Miller, a reporter for Declassified UK, an investigative journalism organisation, claims the continued use of air power caused a crucial ceasefire to collapse, prolonging the bloody civil war. Lt Col Richard Holworthy, Britain’s former defence attache to Sri Lanka, told Miller that the helicopters bombed Tamil civilians using grenades placed inside wine glasses. “They’d fly over and drop the grenade with the wine glass, and of course when it hit the ground the glass broke, the grenade exploded,” Holworthy said.

In Nicaragua, one of the company’s directors worked with US-backed Contra rebels. Documents seized from Colonel Oliver North, who oversaw the funding of US operations in Nicaragua, confirmed KMS’s involvement in the country.

David Gladstone, a former British high commissioner to Sri Lanka, told Miller that KMS had “some sort of political cover in this country … there were one or two British politicians who were connected to the company”.

These included Sir Anthony Royle, a former SAS soldier who had been best man to the KMS founder Col Jim Johnson and went on to be vice-chairman of the Conservative party under Margaret Thatcher. On several occasions, Foreign Office officials asked Royle to have a quiet word with Johnson about KMS activities rather than put their concerns into writing.

“You get the sense that at times the Foreign Office felt it was quite beneficial what Keenie Meenie was doing,” Miller said. “The British state didn’t have to get its hands dirty and Keenie Meenie could be doing things they didn’t want to be doing.”

KMS closed down in the early 1990s after questions about its activities were aired in parliament.

“Part of the reason for writing the book is for it to act as a cautionary tale, so if others think of going down this path in the future they could reflect on the consequences it could have,” Miller said. “While it can make these companies quite a lot of money in the short term, it’s a high-risk strategy.”
Add Comment