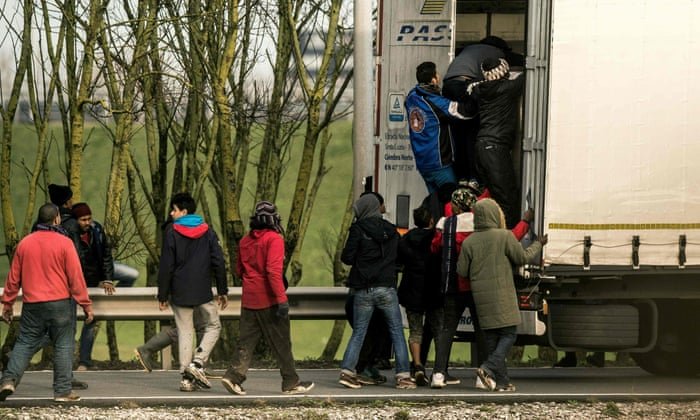 The vast majority of arrivals hid illegally in lorries rather than using safe schemes backed by government
More than 10,000 unaccompanied children are believed to have entered the UK over the past decade using dangerous methods such as hiding in the back of a lorry according to new analysis that raises fresh scrutiny over the Home Office’s approach towards helping young refugees.

Although the Home Office cites the volume of arrivals as proof of its compassion, lawyers accuse it of being disingenuous and say that in reality 90% of the minors have illegally entered the UK and done so by risking their lives.

The research, by legal charity Safe Passage, follows last week’s vote in the Commons which rejected proposals to keep protections for child refugees in the redrafted EU withdrawal agreement bill.

Latest official statistics reveal that 12,248 unaccompanied minors have been granted protection in the UK since 2010, a number the Home Office says shows off its “proud record of helping vulnerable children”.

However, only 700 or so have arrived through government schemes that guarantee the safety of minors.

Jennine Walker, head of UK legal and arrivals at Safe Passage, said: “It beggars belief that the government is proudly proclaiming it has helped thousands of children, when so many of those have endured horrendous journeys just to reach our shores.”

An audit of law firms who represent asylum-seeking children suggests that nine out of 10 unaccompanied minors who have illegally entered the UK did so by lorry. The Home Office does not disclose how child refugees reached the UK.

Giulia Tranchina, a solicitor at Wilson, has worked on at least 50 child refugee cases with each one involving illegal entry via lorry. “All were traumatised with psychiatric issues, most have PTSD and all had endured awful experiences,” she said. “Many had also been tortured. They would try for months to make it by lorry, sleeping in parks or on the streets by day and then making their way to lorry parks at night. Older boys and adults would show them how to jump.”

Eleanor Simon, a solicitor from Coram Children’s Legal Centre in London has represented dozens of child refugees with the “vast majority” arriving by lorry.

“One made it to the UK by clinging to the wheel arch of a coach, centimetres from the engine and at risk of falling under the wheel at any moment. Another came in a freezer container and spent the whole journey thinking he would die,” she said.

Mark Housby, senior caseworker at South West London Law Centres has represented 12 unaccompanied minors since June with all but one arriving by lorry. His colleague, senior solicitor Rajitha Kumar, is currently representing 33 unaccompanied minors of which 27 travelled by lorry. Another caseworker, Pradeep Kumar, has represented 18 minors since March with just two arriving legally through a government scheme from Greece.

“Some have distressing experiences in France and other EU countries. Some did not find any major difference between the persecutors they fled from and the authorities who dealt with them during their journey to the UK,” said Kumar.

Such accounts, said Walker, articulated how children are risking their lives because there are not enough safe and legal routes to reach the UK to seek asylum. “Instead of hiding behind misleading stats, the government must recognise it has a responsibility to help children safely claim asylum in the UK.”

The Home Office came in for renewed criticism on Saturday when a coalition of human rights organisations accused it of deliberately and destructively preventing child refugees from being reunited with their families.

Criticising last week’s parliamentary vote which blocked the rights of child refugees being reunited with family members living in the UK, Amnesty International UK, Refugee Council and Save the Children said it constituted a “flagrant breach of international law, causing irreversible harm to children in this country”.

A Home Office spokesperson said: “Those who need international protection should claim asylum in the first safe country they reach – that is the fastest route to safety. There are a number of safe and legal routes available to provide protection for the most vulnerable refugees, including children.”
Add Comment