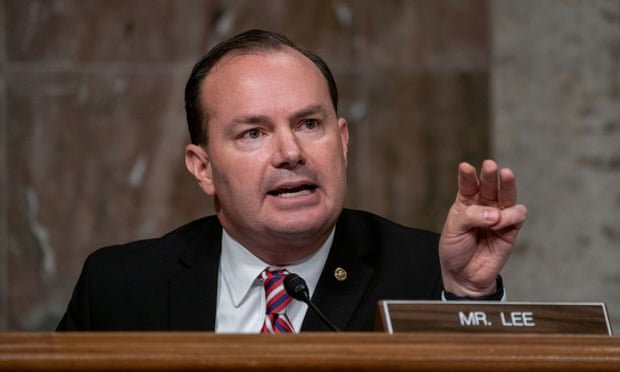 Republican senator says 'democracy isn't the objective' of US system

Mike Lee makes inflammatory declaration in morning tweet after claiming US ‘is not a democracy’ during Wednesday debate
A top Republican senator has said that “democracy isn’t the objective” of America’s political system, sparking widespread outrage at a time when his party has been accused by Democrats of plotting voter suppression and questioning a peaceful transition of power in November’s election.

“Democracy isn’t the objective; liberty, peace, and prospefity are. We want the human condition to flourish. Rank democracy can thwart that,” he wrote, misspelling prosperity.

It followed a series of tweets he made during the debate between Mike Pence and Kamala Harris in which Lee claimed “We’re not a democracy” and questioned its role in US government.

Lee, who is among a swath of Republicans who recently tested positive for coronavirus, wrote: ‘The word “democracy” appears nowhere in the Constitution, perhaps because our form of government is not a democracy. It’s a constitutional republic. To me it matters. It should matter to anyone who worries about the excessive accumulation of power in the hands of the few.’

He added: “Government is the official use of coercive force–nothing more and nothing less. The Constitution protects us by limiting the use of government force.”

His democracy tweet immediately prompted alarm, including from a number of former government officials.

Walter Shaub, former director of the US office of government ethics, said: “People of my grandfather’s generation knew what to do about fascists. Now a member of Congress is urging us to join them. I wonder what made you hate America so much.”

The Bloomberg columnist Jonathan Bernstein wrote: “If we’re not to have rule of the people, who exactly should rule? Throughout American history, from the Framers up to the present, the answer has always been the same: the people.”

It comes amid growing concerns over the integrity of the election on 3 November.

In the vice-presidential debate Harris accused Donald Trump of promoting voter suppression, saying he “openly attempted to suppress the vote”.

During the presidential debate he prompted fears over potential voter intimidation when he told supporters to “go into the polls and watch very carefully”.

Meanwhile, Trump and Pence have refused to assure voters of a peaceful transfer of power if the Republicans lose November’s election.

The president has said: “Well, we’re going to have to see what happens.” And in the vice-presidential debate, when asked what he would do if Trump refused a peaceful transfer of power, Pence said: “First and foremost, I think we’re going to win this election.”

With less than a month to go until the election, Democrats and civil rights groups have sought to make it easier to vote by mail during the pandemic, while Republicans and the Trump campaign have fought to keep restrictions in place.

In Florida, a federal appeals court ruled in September that people with felony convictions could not vote unless they had repaid all outstanding debts – potentially blocking an estimated 744,000 people from voting.
#Donald Trump  #Coronavirus

A. Einstein 107 days ago
If the US is not a democracy then it should stop pretending to be the champion of democracy. And STOP interfering, threatening and destabilising other countries under the guise of protecting democracy!

William E. Herron 107 days ago
I am for non-partisan elections at all levels (local, state & federal) with term limits including
all levels of the federal judiciary.

Robert E Guilbault 108 days ago
We are not a democracy. A democracy is a place where the people govern. In the US and most of the rest of the world; it is the 1% that govern. We do not have a government of and for the people but rather a government of and for the 1%. Realistically it has always been the richest or the most militarily backed people who have ruled and the rest of us follow. Liberty and justice for all is a myth. We see this when the most wealthy pay the least taxes and when the wealthy can buy their way out of the military in time of war.
View all comments (4)Add comment