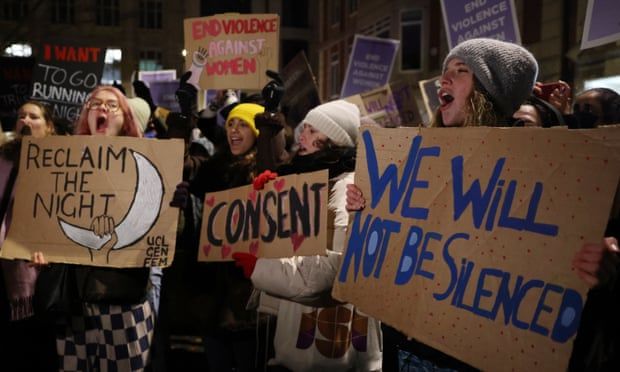 Sex crimes logged by police in England and Wales have reached a record high amid warnings from the victims’ commissioner that the government’s aim to boost prosecutions to levels last seen five years ago is “a pipe dream”.

Police-recorded sexual offences increased to their highest level over a 12-month period, with 183,587 in the year to December 2021, according to the Office for National Statistics (ONS). 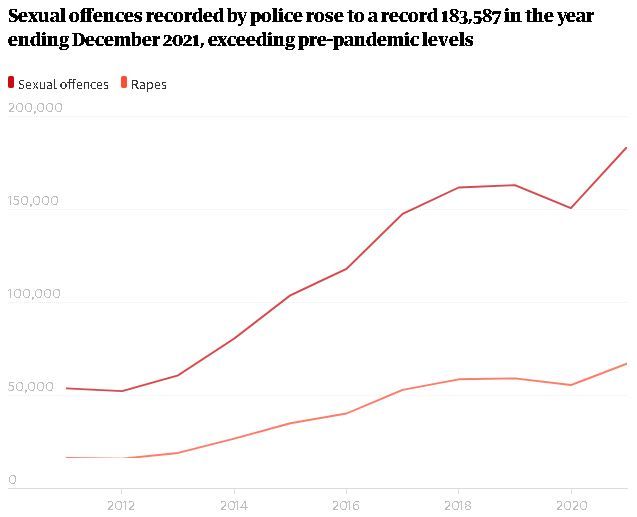 Vera Baird, the victims’ commissioner for England and Wales, said the increase in reported rapes contrasted with the low number of prosecutions and left the government with little hope of reaching its goal of returning to 2016-17 prosecution levels of 5,190 cases a year. They fell nearly 60% in four years to 2,102 in 2019-20 even as the number of reports to police increased.

“Record levels of victims are coming forward, but the charging rate remains in the doldrums. The marked increase in victim reporting is simply not translating into increased referrals and charges,” Baird said. “Close to a year since the publication of the government’s end-to-end rape review, we are yet to see any substantive improvement. The government’s promise to return to 2016-17 levels of prosecutions by the end of this parliament remains a pipe dream.”

The increase in reported sex crimes may reflect a number of factors, the ONS said, including the “impact of high-profile incidents, media coverage and campaigns on people’s willingness to report incidents to the police, as well as a potential increase in the number of victims.”

The rape and murder of Sarah Everard in March 2021 prompted a national debate over women’s safety, sexual violence and the response of police and prosecutors. Police forces have launched campaigns to encourage victims to come forward.

Home Office figures also show that the proportion of all offences resulting in a charge fell in a year from 7.5% to 5.8%, not much more than a third of the rate of 15.5% in 2014-15 when records began. 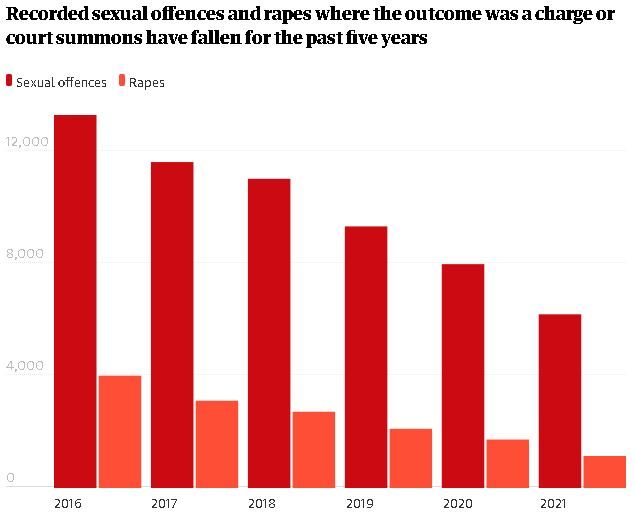 Total police-recorded crime was lowest in the first quarter of the year (January-March 2021) when there were major Covid lockdowns, but from April recorded crime returned to the levels seen before the pandemic, the ONS report said.

It added: “Since restrictions were lifted following the third national lockdown in early 2021, police-recorded crime data show indications that certain offence types are returning to or exceeding the levels seen before the pandemic. While violence and sexual offences recorded by the police have exceeded pre-pandemic levels, theft offences and robbery remain at a lower level despite increases over the last nine months.”

Overall police-recorded violence increased by 13% in a year, from nearly 1.8m offences to more than 2m in the year ending December 2021.

Diana Fawcett, the chief executive of the charity Victim Support, said: “We are seriously concerned that sexual offences have reached a record high for the second year in a row. Sadly, these figures reflect what we’re seeing – the number of sexual violence cases referred to us have increased by a third since before the pandemic.”

A Home Office source said the government was committed to reducing murder, neighbourhood crimes such as robbery and serious violence through a “Beating the Crime” plan announced by Boris Johnson in October.

“Official statistics out today demonstrate that the Beating the Crime plan is working, with neighbourhood crime down by 31% and hospital admissions for under-25s as a result of assaults with a knife or sharp object down by 19% since June 2019. But there is much more work to do to reduce the number of lives being lost, so the government will continue backing the police to be relentless in their pursuit of violent criminals.”