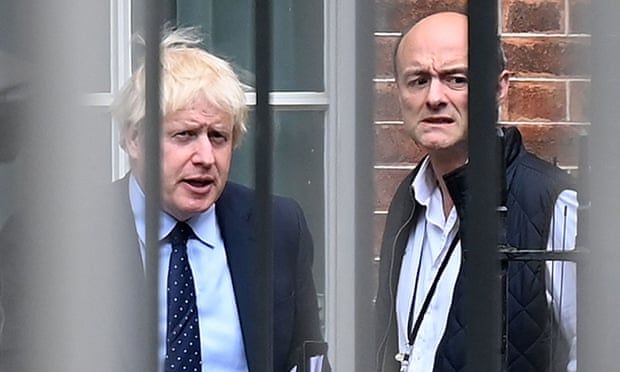 Labour says rules broken over contract that examined attitudes towards Keir Starmer and Sadiq Khan
Labour is calling on the Conservative party to pay back £580,000 of taxpayers’ money spent by the government on polling, including testing public attitudes to Keir Starmer, at the height of the Covid crisis.

Angela Rayner has written to the cabinet secretary, Simon Case, urging him to investigate the contract, which was awarded after the personal intervention of Boris Johnson’s then chief adviser, Dominic Cummings.

Rayner said: “Conservative ministers have abused taxpayers’ money for their own party political interests and the Conservative party needs to repay this money immediately.

“Taxpayers’ money is not the personal cashpoint of Tory ministers to do as they please with. We need a fully independent inquiry into how much taxpayers’ money has been abused in this way and which rules were broken by the ministers and special advisers who authorised it.”

As part of the polling contract, the company examined public attitudes to Starmer and London mayor Sadiq Khan.

One proposal under discussion at the time was to hold joint press conferences with Johnson and Starmer, against the backdrop of concerns about compliance with lockdown, in particular among members of the public who mistrusted the Conservatives.

The plan was rejected by Downing Street before it had even been mooted with Starmer’s team, but Labour argues that by testing the public’s attitude to the Labour leader and Khan, Hanbury was carrying out political work, which should never have been funded with taxpayers’ money.

Hanbury had previously been brought in to sift potential candidates to be special advisers in Johnson’s government.

Rayner has called on Case to investigate whether Johnson or cabinet office minister Michael Gove, the former chair of Vote Leave, were involved in awarding the contract – and whether other sums of public money were spent on political activities.

The contract with Hanbury, to conduct opinion polls on the public’s view of the government’s Covid response, is subject to a legal challenge by the Good Law Project (GLP), which argues that it shows “apparent bias”.

Documents made public at a court hearing last Friday included an email sent on 20 March 2020, in which Cummings asked the most senior civil servant responsible for contracts to sign off the budget immediately, and that if “anybody in CABOFF [the Cabinet Office] whines”, to tell them Cummings had “ordered it” from the prime minister.

The Cabinet Office, which is defending the GLP’s challenge, has insisted it acted lawfully, and that the polling was used to shape public health messaging at a critical time in the pandemic.

A Cabinet Office spokesperson said: “We do not carry out party political polling.” They added that an independent review of cabinet office procurement had already been carried out last December by Nigel Boardman.

A Hanbury spokesperson said the company agreed to do the work “at extremely short notice” although it involved reputational risk.

They said: “Our work contributed to what was a hugely successful public health communications campaign which undoubtedly prevented many deaths. For that reason, if we had to make the choice again we would still agree to step up and help in this time of crisis.”
#Boris Johnson  #Johnson  #Covid
Add Comment