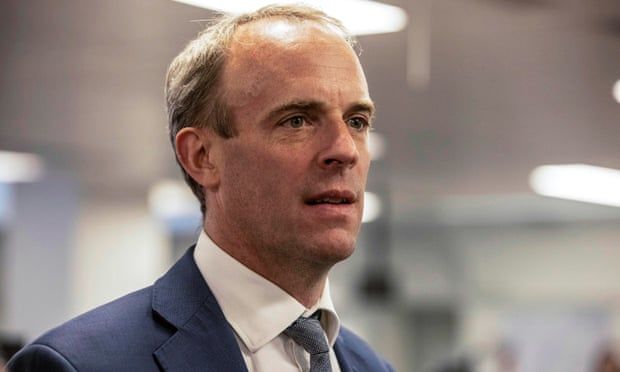 Questions Raab needs to address as he faces MPs over Afghanistan

The British foreign secretary, Dominic Raab, will appear before the Commons foreign affairs select committee on Wednesday to answer questions about the UK’s withdrawal from Afghanistan.

The committee’s chairman, the Conservative MP Tom Tugendhat, has promised to be no more sparing of his government than he has been of the Americans when he interrogates Raab over what he has described as the biggest British foreign policy disaster since the 1956 Suez crisis. But Raab has proved adroit in the past at defusing potentially difficult select committee sessions, notably over overseas aid cuts.

The foreign secretary, fighting for his cabinet career and accused of being asleep on his watch by former military leaders, will doubtless want to steer the session to the future in Afghanistan, rather than any specific errors or misjudgments made by his department in the run-up to and during the withdrawal. Much will depend on the forensic skills of the committee and their determination to seek specific answers.
Here are some key questions Raab needs to address:

Raab has said “the best military assessment shared by all of our allies was there would only be a slow incremental deterioration from September” in the position of the Afghan government.

*  Did MI6 not make its own different assessment?

*  Why did the former Afghan government have so little popular support and did the intelligence agencies foresee this?

*  Britain chaired the ambassadorial anti-corruption working group in Kabul and was central to the training of the Afghan army. Both enterprises clearly failed. Why did ministers and military repeatedly give overoptimistic reports on the Afghan government’s progress.

*  What warnings did the UK give of the potential consequences in an effort to dissuade the US in April from adopting a timetable of leaving Afghanistan at the end of August?

*  Did it warn against leaving the Afghan army without air support?

*  Announcing the US troop withdrawal, the president said he had “closely consulted with allies”. Had he? What does it say about UK influence in Washington under Joe Biden?

*  How seriously and at what meeting(s) did Britain, as ministers claim, canvass other Nato countries to retain a military presence in the country without the US? Will the UK now rethink its approach to greater European defence interoperability?

*  Was the issue raised at the UK national security council while Raab and his most senior civil servant remained on holiday?

*  Did the Foreign Office make contingency plans for a military collapse, including the protection of UK nationals and those in need of asylum?

*  How much was due to be cut from the Afghan aid budget?

*  Why was a wider resettlement scheme not launched until August?

*  An estimate must exist of the numbers inside Afghanistan that have contacted the UK to help them leave. What is it? What help, on what terms, will the UK give neighbouring countries to process applicants? How long will this take?

*  What levers do ministers have to influence the Taliban in the future over issues such as free passage for those who want to leave the country and inclusive governance?

*  Does the UK support the US withholding of Afghan assets?

*  Will the UK now repair relations with Pakistan, a country that has lost all UK aid, been excluded from its new Indo-Pacific policy and often been accused by the UK as the Taliban’s protectors?

*  Did the UK not overcommit to India, ultimately a loser in this contest?

*  Will the government provide intelligence to the Taliban to defeat Islamic State?

*  What future risk does al-Qaida pose to Europe? How can “over the horizon” counter-terrorism measures work effectively without human intelligence?