HMS Queen Elizabeth will sail from Portsmouth Naval Base.

The Queen has been welcomed on board HMS Queen Elizabeth following Prince Harry’s bombshell claims about the royal family.

The £3 billion warship, with eight RAF F35B stealth fighter jets on board, will depart later on Saturday for Asia accompanied by six Royal Navy ships, a submarine, 14 naval helicopters and a company of Royal Marines.

The Queen was greeted by the ship’s commanding officer Captain Angus Essenhigh, and Commodore Stephen Moorhouse, commander of the UK Carrier Strike Group (CSG), as she arrived by helicopter on board the aircraft carrier at Portsmouth Naval Base.

Her tour follows a visit by Prime Minister Boris Johnson on Friday. 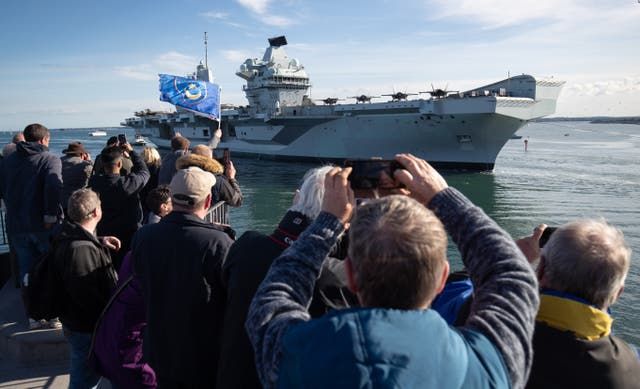 It comes after the Duke of Sussex gave another jaw-dropping interview to Oprah Winfrey in which he admitted turning to drink and drugs as a way of coping with his mother’s death.

In the first instalments of his mental health documentary series with Ms Winfrey, Harry said he used alcohol to “mask” his emotions, spoke about Meghan’s struggles with suicidal thoughts and how therapy has given him hope.

The duke once again lambasted the parenting skills of the Prince of Wales, criticising his father for expecting his sons to endure the pressures of royal life, just as Charles has done, instead of protecting them. 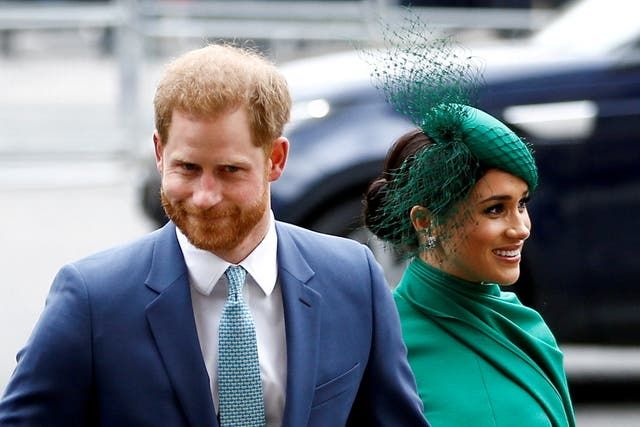 Prince Harry dropped another bombshell, accusing his family of “total neglect” in an interview

Harry criticised his family, accusing them of “total neglect” when his wife Meghan was feeling suicidal amid harassment on social media.

And he laid bare his battles with panic attacks and severe anxiety, saying “so 28 to probably 32 was a nightmare time in my life”.

The duke also told Winfrey his family did not speak about Diana’s death and expected him to just deal with the resulting press attention and mental distress.

HMS Queen Elizabeth will cover 26,000 nautical miles during the 28-week deployment, travelling through the Mediterranean to the Red Sea, then from the Gulf of Aden to the Arabian Sea and Indian Ocean to the Philippine Sea. 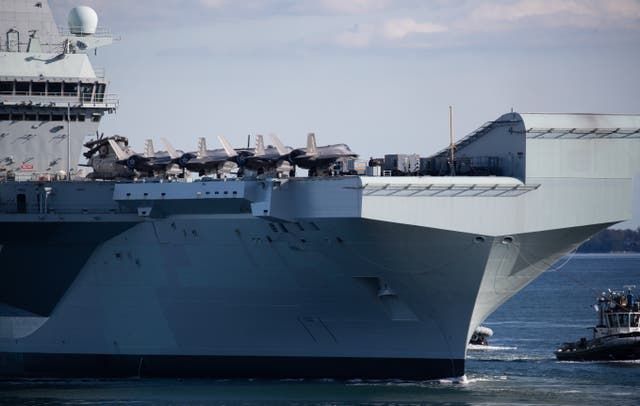 The CSG will carry out visits to 40 countries including India, Japan, South Korea and Singapore with more than 70 engagements, including sailing alongside the French carrier Charles De Gaulle in the Mediterranean.

As well as the UK military units involved in the CSG, HMS Queen Elizabeth will also have a squadron of 10 US Marine Corps F35B Lightning II jets embarked and be accompanied by the US destroyer USS The Sullivans and the Dutch frigate HNLMS Evertsen.

Defence Secretary Ben Wallace has said the deployment “will be flying the flag for Global Britain – projecting our influence, signalling our power, engaging with our friends and reaffirming our commitment to addressing the security challenges of today and tomorrow”.

The Ministry of Defence (MoD) has also announced that the CSG’s F35B Lightning fast jets operated by the renowned “Dambusters” squadron, or 617 Squadron, will join Operation Shader targeting the remnants of so-called Islamic State in Iraq and Syria.

The F35B jets are multi-role combat aircraft equipped with advanced sensors, mission systems and stealth technology – enabling them to carry out intelligence, surveillance and reconnaissance tasks.

But heavy winds led to the unscheduled stop in the naval base with most of the other ships waiting at Devonport to regroup before sailing for the Mediterranean.

The deployment has been organised as part of the “UK’s tilt to the Indo-Pacific region” in a bid to “bolster deep defence partnerships” as well as to take part in an exercise to mark the 50th anniversary of the Five Powers Defence Agreement with Malaysia, Singapore, Australia and New Zealand.

As well as the stealth fighters, four Wildcat maritime attack helicopters, seven Merlin Mk2 anti-submarine helicopters and three Merlin Mk4 commando helicopters will be embarked – the greatest quantity of helicopters assigned to a single UK Task Group in a decade.