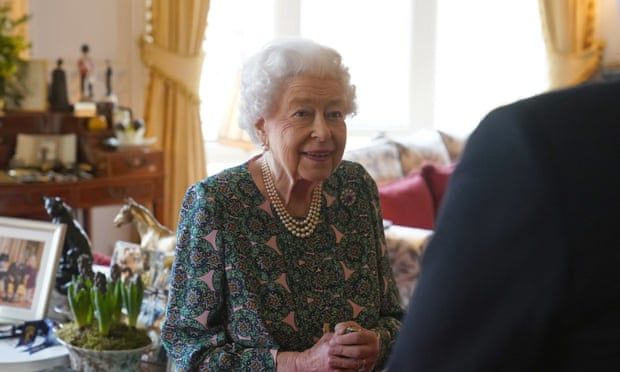 Queen to speak to PM in weekly update from self-isolation

UK monarch tested positive for Covid, which is manifesting in ‘mild cold-like symptoms’
The Queen is expected to speak to Boris Johnson on Wednesday for her regular weekly update from the prime minister as she continues to recover from Covid-19.

Audiences with foreign ambassadors are expected to go ahead – also on a virtual basis – as the monarch remains in self-isolation at her home in Windsor.

A day after testing positive for the virus – which Buckingham Palace said on Sunday was manifesting itself in the form of “mild cold-like symptoms” – the Queen was still undertaking light duties in her capacity as head of state.

Messages of goodwill continued to roll in from in the UK and overseas, while Boris Johnson told MPs in parliament that the Queen’s positive test was a reminder that the virus “has not gone away”.

Her work on Monday included sending condolences to the people of Brazil after flooding in the city of Petrópolis. “I am deeply saddened to hear of the tragic loss of life and destruction caused by the terrible floods in Brazil,” she wrote in a message posted on the royal family’s official Twitter account.

“My thoughts and prayers are with all those who have lost their lives, loved ones and homes, as well as the emergency services and all those working to support the recovery efforts.”

But while the Queen’s conversation with the prime minister on Wednesday will not take place face to face, campaigners and advocates for elderly people said that many of those among a cohort of more than 1.3 million people who continued to work over the age of 65 included some in public-facing roles who had no choice but to keep on working.

The relaxation of Covid restrictions and the ending of self-isolation was a source of worry for many people aged 65 and over, said Morgan Vine, head of policy and influencing at Independent Age. “We are concerned that this sudden change in direction of public safety is likely to increase anxiety among older people, and even cause some to shield themselves and limit daily activities.”

The charity added that recent research – between 9 and 13 February – had shown that the challenges faced by those in later life due to the pandemic had worsened many people’s mental health.

“If the requirement to isolate is removed, this fear is likely to increase alongside the likelihood of coming into contact with someone who has Covid,” said Vine, speaking a few hours before Johnson’s announcement that the requirement to self-isolate after testing positive in England would end on Thursday.

Concerns that many in the older population were deeply anxious about making a transition back to a more normal way of life were also echoed by the UK’s largest charity for older people, Age UK.

Ruth Isden, head of health and care influencing at Age UK, said it was going to take time and effort to reassure people and that it was important that government messaging carefully explained the next steps when it came to elderly people and the clinically vulnerable.

“We are in a very different position, and vaccines have made a huge difference, but it’s important that the government explains and reassures people as it moves forward with its plans.

“If you are in an older age group and have had your vaccinations, and then have kept them up to date, then you are in a much better place, but we have to keep on reassuring people, as well as recognising that it’s not just simply a case of how we feel about ourselves. We need to be cautious and careful when it comes to others.”

Rowan Hardwood, professor of geriatric medicine at the University of Nottingham, reiterated the message of other experts that those who have been vaccinated and had kept it up to date, at no matter what age, were in a radically different position from anyone who had not had a jab.

But he added: “It is important to recognise that the situation with older people can vary much more than other groups. Virtually anyone by the age of 90 is frail, and by frail, we mean vulnerable and prone to deterioration.

“If you have contracted the virus and are quite well to the extent that you are managing to do daily activities, then the vaccine will stand you in good stead. That would apply to anyone of any age.”
#Boris Johnson  #Vaccines  #COVID-19  #Johnson  #vaccine  #Covid
Add Comment