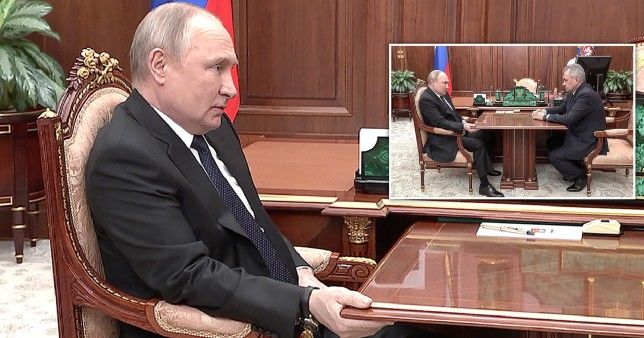 Putin grips table during meeting sparking speculation about his health

Vladimir Putin has been filmed clutching onto the corner of a table during a televised meeting – sparking speculation over his health.

The Russian president was filmed holding a meeting with Sergei Shoigu, Russia’s defence minister, during which the pair discussed the ‘liberation’ of the Ukrainian port city of Mariupol.

But Mr Putin’s posture and general appearance during the rare televised appearance has raised questions about his health.

The Russian president is seen slouched in his chair and appears to be lacking in energy for someone supposedly claiming a victory.

He also refuses to let go of the corner of the table he and his defence minister are sitting at – appearing to use the furniture to steady himself.

The footage has raised further questions over Mr Putin’s health, which some claim has rapidly deteriorated since Russia invaded Ukraine on February 24.

Mr Shoigu, who some suggested had been sidelined because of ill health or a disagreement over the war, read his short address to Mr Putin from a sheet of paper. 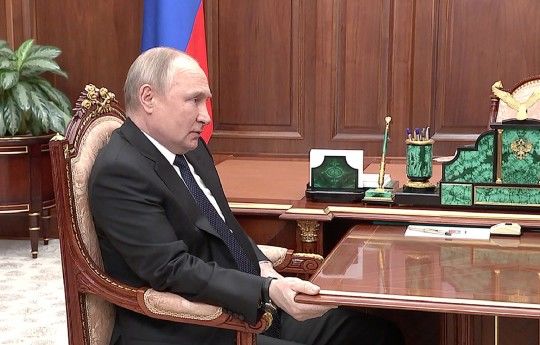 Anders Aslund, a Swedish economist and former adviser to Russia and Ukraine, said neither Mr Putin nor Mr Shoigu looked well, describing both as appearing ‘depressed and seemingly in bad health’.

‘Shoigu has to read his comments to Putin and slurs badly, suggesting that the rumours of his heart attack are likely. He sits badly. Poor performance,’ he added.

The meeting with Mr Shoigu is not the first time the Kremlin leader has been spotted gripping a table during a meeting.

Mr Putin was also photographed clutching the corner of the table during a meeting with Nikolay Tokarev, the president of Transneft, a Russian state-controlled oil pipeline company, on Thursday.

Speculation over Mr Putin’s health has been rife, since the start of the war.

One report suggested the Russian leader was under near-constant monitoring by cancer specialists, while his noticeably bloated appearance has led to suggestions he may be undergoing steroid treatment. 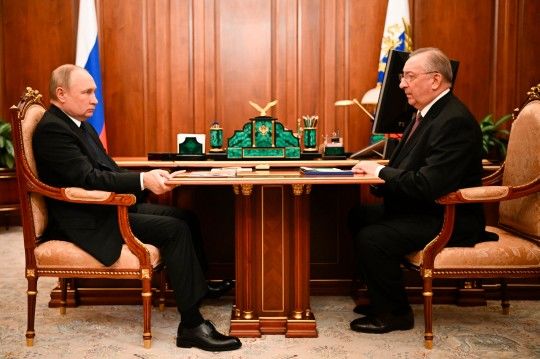 Mr Putin, left, also gripped the table during a meeting with the president of Transneft, Nikolay Tokarev on Thursday

Some have pointed to Mr Putin’s bizarre use of long tables during talks with other world leaders and ministers as an indicator of clinical vulnerability, suggesting the comical seating arrangement may be because the Russian leader is on immunosuppressant medication.

There have also been various unverified reports on the president’s psychological health, leading to speculation the president may be mentally ‘compromised’.

The Kremlin has repeatedly denied reports that Mr Putin has suffered ill health – many of which clustered around five stints over the last decade when he was not seen in public for several days, while officials broadcasts of his meetings were found to have been pre-recorded.

His personal life is shrouded in secrecy, with many of the rumours around his love life and reported illegitimate children difficult to pin down.