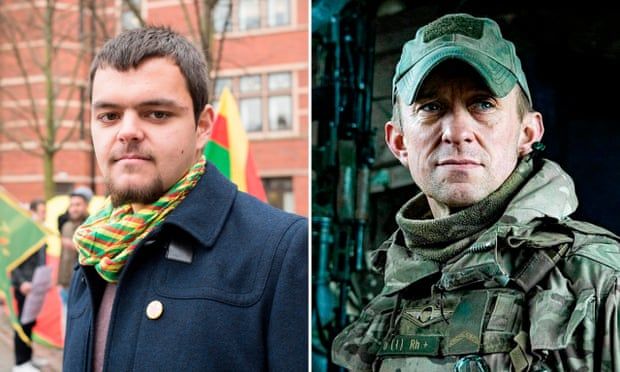 The two men, who are serving in the Ukrainian military, and Ibrahim Saadun, a captive from Morocco, were shown sitting in a courtroom cage reserved for defendants in a video released on pro-Russian social media channels on Tuesday.

Prosecutors from the self-proclaimed Donetsk People’s Republic, a proxy government in east Ukraine controlled by Russia, have said that the men face the death penalty for “terrorism” and for fighting as “mercenaries” against the Russian invasion.

Aslin and his fellow defendants have said they were regular soldiers fighting in the Ukrainian military and should be treated as prisoners of war.

If the images from the courtroom are confirmed, the men would be the first Ukrainian soldiers to be tried by pro-Russian forces in what observers say could be a series of show trials meant to justify Russia’s invasion of Ukraine.

“Do you know the information in your indictment?” an interpreter asked Aslin, 28, from Newark, Nottinghamshire. “Tak tochno,” he replied, a military response meaning “affirmative”. Shaun Pinner, 48, from Watford and Bedfordshire, also said he understood the charges against him.

Russian officials have threatened to hold military tribunals they have called “Nuremberg 2.0”, meant to mirror war crimes trials being held in Kyiv for atrocities committed by invading Russian soldiers. Observers say the trials may be deliberately constructed to put maximum pressure on the west and to prompt prisoner exchanges for Russian soldiers captured and tried in Ukraine.

In a statement, Aslin’s family asked for privacy from the media. “This is a very sensitive and emotional time for our family, and we would like to say thank you to all that have supported us,” they said.

“We are currently working with the Ukrainian government and the Foreign Office to try and bring Aiden home. Aiden is a much-loved man and very much missed, and we hope that he will be released very soon.”

Ukraine has sentenced three Russian soldiers to prison for war crimes tied to the Russian offensive that began on 24 February. Vadim Shishimarin, 21, was sentenced to life in prison for killing a 62-year-old civilian in Ukraine’s north-eastern Sumy region early in the war. And two soldiers, Alexander Bobikin and Alexander Ivanov, were each sentenced to more than 11 years in prison for shelling attacks on population centres that “violated the laws and customs of war”.

Prosecutors said Aslin and his co-defendants were charged with four separate offences: committing a crime as part of a criminal group; forcible seizure of power or forcible retention of power; being a mercenary; and the promotion of training in terrorist activities.

But the two men were serving in Ukraine’s marines while taking part in the defence of Mariupol’s Azovstal steelworks. Aslin, who had previous volunteered with a Kurdish militia against Islamic State fighters, ran a popular Twitter account and had been pictured being sworn into the Ukrainian armed forces.

Nonetheless, both men have been paraded before television cameras since they surrendered alongside hundreds of Ukrainian soldiers in May after months spent in a desperate defence of the Ukrainian steelworks.

Andrew Hill, 35, a father of four from Plymouth, was also captured during fighting in southern Ukraine.
Add Comment