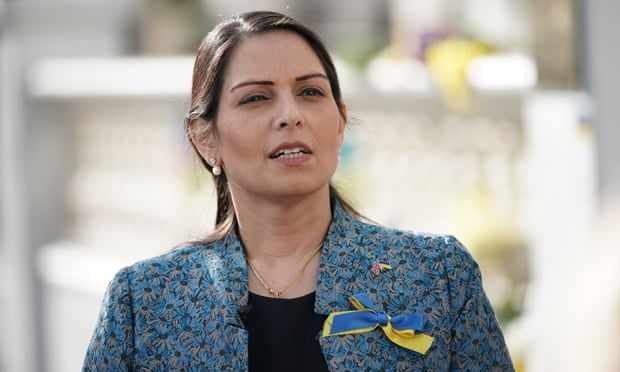 Exclusive: Charities say Homes for Ukraine scheme endangers refugees, adds to trauma and needs overhaul
The UK home secretary, Priti Patel, is facing mass legal action over delays that have left thousands of Ukrainians at risk of trauma and Russian bombs, or in limbo in eastern Europe.

A class action lawsuit is being prepared on behalf of hundreds of Ukrainians who applied to travel to the UK weeks ago but whose cases have been stuck in a “chaotic” visa backlog, the Guardian has learned.

Charities including Save the Children and the Refugee Council said the Homes for Ukraine programme must be overhauled urgently as it was endangering vulnerable children and adding “trauma on top of existing trauma” since Russia’s invasion.

The chronic delays have been compounded by the Home Office approving many visas but failing to notify the successful applicants. The government admitted on Thursday it was aware of the problem after MPs from the across the Commons raised concerns about families waiting up to five weeks for news of their application.

According to the latest government figures, 59,000 people have had visas approved but have not yet arrived in the UK. Only 15% of the 74,700 Ukrainians who applied under the sponsorship route have made it to Britain.

A large number of those who have not yet arrived will be people waiting for other family members to receive their visas before travelling; children’s applications usually take longer because the UK requires them to undergo security scans if they do not have their own international passport.

However, a significant proportion of the 59,000 Ukrainians will be people who have had visas approved but have not been informed of the approval.

Amanda Jones, an immigration and public law barrister, has been instructed to launch legal proceedings on behalf of “many hundreds” of Ukrainians, in litigation organised by members of the groups Vigil for Visas and Taking Action Over the Homes for Ukraine Visa Delays. This could include mounting a judicial review case against the Home Office.

Legal action is also being prepared on behalf of lone children who have been unable to access foster placements set up for them in the UK due to the visa delays.

Anaïs Crane, a case worker at Wilsons Solicitors who is working with Here For Good Ukraine Project and representing several unaccompanied Ukrainian children, said they had been waiting longer than a month for a decision and were starting to give up hope. “Many of them are now considering returning to Ukraine due to their precarious situations in Europe,” she said.

Yvette Cooper, the shadow home secretary, described the delay between visas being approved and sent out as “inexplicable and disgraceful” and urged the Home Office to disclose how many people had been affected and what steps it was taking to address the problem.

She added: “For families who have already fled war zones to then be stuck in limbo even longer because the Home Office can’t even get its act together to notify people when the visas have been granted is appalling. Long delays are making families more vulnerable to exploitation.”

Kirsty McNeill, an executive director at Save the Children and a former Downing Street adviser, said the red tape was increasing the danger for some of the 1.5 million children who had fled Ukraine since the Russian invasion on 24 February.

She said: “Part of [the government’s] argument for the bureaucracy and the slowness is that it is keeping people safe. But actually it’s a lack of pace that is endangering children more than anything.”

The chief executive of the Refugee Council, Enver Solomon, said stories of women and children being stuck in dangerous situation were the “dreadful but inevitable consequence” of an approach that was “flawed from the start”.

He said: “Responding to what is clearly a serious humanitarian crisis with two visa routes … was always going to result in paper and bureaucracy being put before people and their needs. Tragically, we are now witnessing the fallout of that approach.”

The International Rescue Committee said the UK was “an outlier” in Europe for requiring those fleeing war to apply for visas before they arrive. Ireland, which does not require visas for arrivals, has taken in roughly the same number of Ukrainians as the UK despite its population being a thirteenth of the size of Britain’s.

A government spokesperson said: “In response to Putin’s barbaric invasion we launched one of the fastest and biggest visa schemes in UK history. Over 86,000 visas have been issued so Ukrainians can live and work in the UK.

“The changes the Home Office has made to streamline the visa system, including simplifying the forms and boosting staff numbers, are working and we are now processing visas as quickly as they come in – enabling thousands more Ukrainians to come through our uncapped routes.”
#Priti Patel
Add Comment