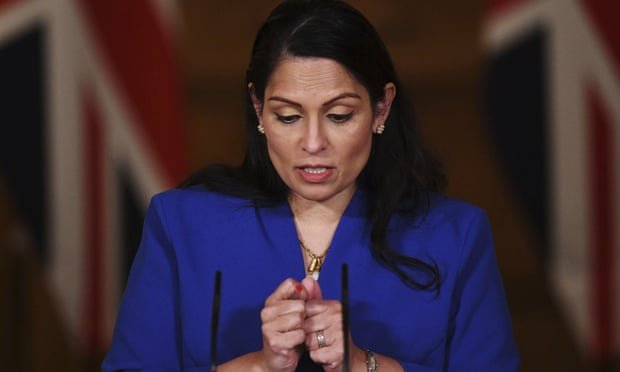 Keir Starmer calls on home secretary to take responsibility for ‘fiasco’ as officers begin to report ‘near misses’
Priti Patel is under mounting pressure to give a full account of a police computer error, which may have affected more than 400,000 crime records.

The Labour leader, Keir Starmer, the former director of public prosecutions, highlighted the gravity of the issue on Saturday and that some of the lost files pertained to live investigations. He urged the home secretary to take responsibility for the fiasco.

The blunder, in which records for serious offences supposed to be kept in perpetuity were accidentally deleted, left police fearing criminals may not be caught – with officers already suffering what they term “near misses” for serious crimes.

The junior Home Office and Ministry of Justice minister Kit Malthouse released a statement on Friday blaming human error and saying urgent efforts were under way to recover the data and assess the full extent of the issue. He later said contingency plans had been put in place to ensure investigations could continue.

Starmer told Sky News: “This government is very good whenever there is a problem at saying it’s somebody else’s fault. At a time like this we need the home secretary to take responsibility herself for this. At the very least she should be in parliament on Monday making a statement about this, explaining it, giving it the full facts and facing questions from MPs. That’s the least we should expect.”

The shadow home secretary, Nick Thomas-Symonds, also told the broadcaster: “You do not make our streets safer by losing such a substantial amount of information about criminal behaviour. This is extraordinarily serious.

“The home secretary needs to be gripping this and tell us what’s going to be done to mitigate the risk, to try and recover this data and how do we prevent it from happening again.”

“Public safety is the number one priority of everyone within the Home Office, and I would like to thank the data engineers working to restore these records,” she said. “I continue to be in regular contact with the team, and working with our policing partners, we will provide an update as soon as we can.”

A letter sent to senior officers on the National Police Chiefs’ Council on Friday from Naveed Malik, lead for the organisation on the police national computer (PNC), seen by the Guardian, outlined the scale of records affected.

“Approximately 26,000 DNA records corresponding to 21,710 subjects have potentially been deleted in error, including records that have previously been marked for indefinite retention following conviction of serious offences,” he said.

The letter revealed cases where some people police suspect nearly got away because of the blunder: “We are aware of a couple of instances of ‘near misses’ for serious crimes where a biometric match to an offender was not generated as expected but the offender was identified through matches between scenes. However, in these circumstances, without a direct match report to the subject, it may be more challenging for police to progress to an interview or arrest.

“We are also aware of at least one instance where the DNA profile from a suspect in custody did not generate a match to a crime scene as expected, potentially impeding the investigation of the individual’s involvement in the crime.”

The deletion also caused chaos with the visa process. Applications, which are checked against the PNC, were suspended for two days but have now resumed.

The Guardian understands that a rapid review identified the problem and corrected it so it cannot happen again.

“While we do so, the police national computer is functioning and the police are taking steps to mitigate any impact.”
#Priti Patel
Add Comment