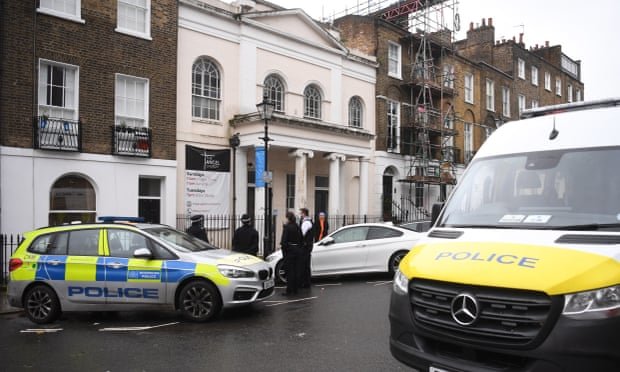 About 30 worshippers had gathered at the Angel church in north London on Sunday for a service including a baptism after pastor Regan King said Christians served “a greater law”.

Four Metropolitan police officers prevented people entering the building in Clerkenwell, and two police vans and a police car were parked outside. Officers allowed 15 people to remain inside the church, while another 15 took part in a socially distanced outdoor service nearby.

Under current restrictions, communal services are banned although places of worship may remain open for individual prayer and streaming of worship, and small funerals are permitted. They are also permitted to run social action projects, such as food banks.

A spokesperson for the Met said officers had explained to the pastor that “due to Covid-19, restrictions are in place preventing gatherings and that financial penalties can be applied if they are breached”, adding: “After a discussion, the pastor agreed to hold a brief socially-distanced outdoor gathering in the church courtyard.”

Earlier, King said he believed the ban on collective worship was unlawful and that the church would “combat any challenge against us”. “Our priority is our fear of God … We serve a greater law,” he told BBC Radio 4. “Just because something is the law does not make it right.”

The restrictions, which are designed to prevent the exponential rise of coronavirus across the country, were discriminatory, he added. “You can go to a garden centre, normal shops. We believe that the church is essential in its role … and so we’re staying open.”

King said the church was complying with government guidance. When churches were allowed to reopen for worship in the summer, congregations had been obliged to socially distance and wear face coverings.

Asked how he would feel if someone attending the service became ill or died, King said: “It would be a tragedy. But remember death is something that comes to everyone. We’ve developed, I believe, a real idol of safety, we take risks on a daily basis. We have to accept the tragedy of death … we’re pointing to hope beyond death.”

King is among 122 church leaders who have launched a legal challenge against the lockdown ban on communal worship in England.

They claim worship has been “criminalised” and the ban has “inflicted a terrible human cost” on congregations for whom collective worship is a core element of their religious life. The ban, they argue, breaches article 9 of the European convention on human rights, which protects the right to freedom of religion.

The ban on public worship has also been challenged by the leaders of the Church of England, the Catholic church and Orthodox Judaism, along with Muslim, Hindu, Sikh and Pentecostal representatives.

They wrote a joint letter to Boris Johnson earlier this month saying there was “no scientific justification for the wholesale suspension of public worship”. Despite their arguments against the ban, most faith leaders are urging followers to comply with the restrictions.
#COVID-19  #Covid  #Coronavirus  #Boris Johnson
Add Comment