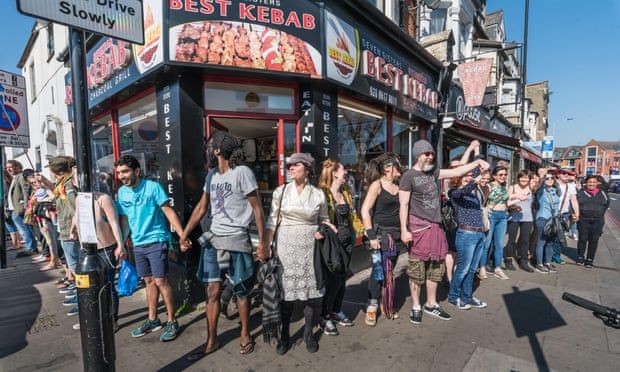 Developer abandons plan for site in Tottenham, which would have involved demolishing Seven Sisters Indoor Market
Campaigners trying to save London’s only surviving Latin market have claimed a victory after the developer behind a multimillion-pound residential plan for the site pulled out.

Grainger on Thursday announced it was abandoning plans for 190 “build-to-rent” flats, with no affordable housing provision, on the Wards Corner site in Tottenham, north London, citing “rising costs” and the strength of local opposition.

The scheme, which was devised in 2008 and approved in 2012, would have involved Grainger demolishing the historic Wards building and Seven Sisters Indoor Market – known locally as the Latin Village and listed as an asset of community value – to build the flats in their place.

Grainger’s withdrawal follows 15 years of campaigning by market tenants and residents of the area. Opponents of the scheme had criticised it as a gentrification plan that would displace poorer, ethnically diverse communities from the area.

London’s fast-growing Latin American community would have been particularly affected: the demolition last year of the Elephant and Castle shopping centre in south London left the Latin Village as the city’s only surviving Latin cultural hub.

In a statement, Grainger blamed its decision to pull out on “the drawn-out nature of implementing the scheme owing to numerous legal challenges from a small but vocal minority, [as well as] the complexity of the site and the changing economic environment”.

In a further significant development, Haringey council, the local authority in the area, published a statement on Friday saying it now planned to work alongside traders, and with Transport for London, which owns the land, “to explore the vision of delivering a new community-led development, with Seven Sisters Market and the wider local community at its heart”.

For several years, local campaigners have been attempting to promote their own plan for redevelopment of the dilapidated site and surrounding neighbourhood. The community plan devised by the West Green Road/Seven Sisters Development Trust proposes the restoration of the existing buildings and their administration by a democratically run community benefit society.

They are now calling for urgent action. With the market closed since the beginning of the coronavirus pandemic, many traders have been forced to survive on hardship payments disbursed by Transport for London.

Peray Ahmet, the leader of Haringey council, said: “We are extremely concerned about the plight of the traders who haven’t been able to trade since March 2020. Our immediate priority is to ascertain from TfL their plans for a temporary market and, most importantly, when it will be up and running.

“Whilst TfL’s hardship fund payments to traders was a welcome intervention, we also need to understand their proposals and timeframes for continuing this much-needed financial support.”

Javiera Huxley, the co-chair of Save Latin Village, said: “Following the closure of the Elephant and Castle shopping centre last September in another redevelopment scheme, spaces like the Latin Village are more important than ever.

“We are heartened by Haringey council’s support for the community plan, which has the Latin Village at its heart. We also welcome their prioritisation of the temporary market, and their calls for further financial support for the market traders.

“We implore TfL, and the Greater London Authority, to move forward with these urgent matters as swiftly as possible.”