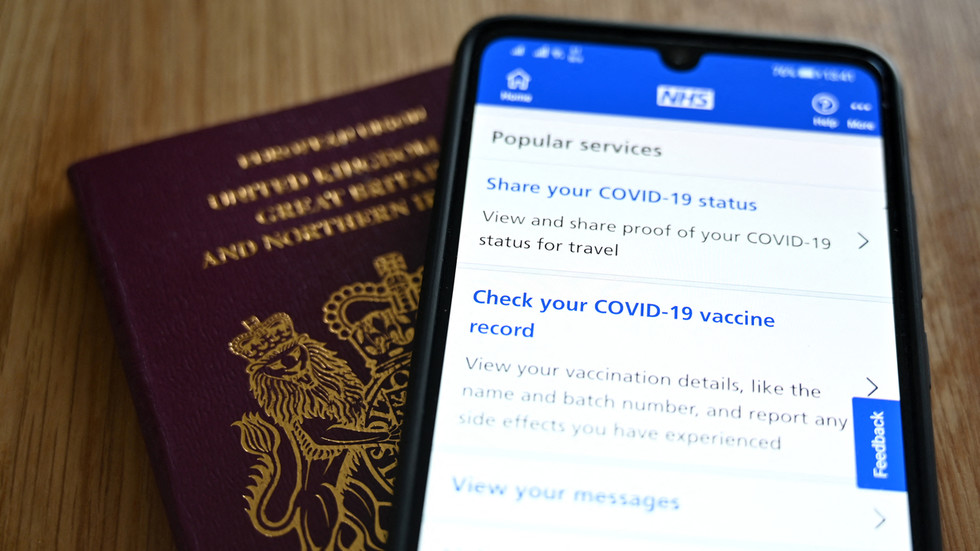 The British government has awarded potentially years-long contracts to help develop a domestic vaccine passport, as Downing Street simultaneously hints that the whole idea could be abandoned if enough people get the jab.
The Department of Health and Social Care (DHSC) published information earlier this week on two new contracts with private tech firms hired to work on the country’s “Covid-19 certification programme.”

US-based Entrust will receive close to £840,000 ($1.2 million) for the development of the NHS health pass. The deal will last until at least July next year but pricing for a two-year contract is already detailed in official documents, suggesting that the UK government may be eyeing a long-term arrangement.

While the contract was made available to the public online, information about specific services that Entrust will be providing has been completely redacted, with several pages of the document blacked out.

The US tech company was awarded £250,000 earlier this year as part of its ongoing work on the health pass program. The contract raised eyebrows after it was revealed that Entrust had openly boasted about how Covid-19 vaccine passports could be retooled to create national IDs as part of the “infrastructure of the new normal.”

The DHSC also signed a second vaccine passport contract this week worth up to £873,000 with Cambridge, Massachusetts IT firm Akamai Technologies. Like the agreement with Entrust, the one-year deal is designed so that it can be seamlessly extended for an additional 12 months. The US firm pocketed £50,000 in May as part of its involvement in the creation of the digital vaccine ID.

The new contracts coincide with the introduction of new features on the NHS app that will allow it to serve as a digital vaccine certificate.

In a controversial reversal of its position on domestic health IDs, the government revealed last week that, starting from the end of September, proof of vaccination will be required in order to enter nightclubs and attend events involving large crowds.

With around 70% of adults in the country already vaccinated, UK Foreign Secretary Dominic Raab suggested on Thursday that the threat of the vaccine passport may be enough to “cajole” young people into getting the shot.

“Once we’ve done that, the wider questions of vaccine certification become much less relevant and salient,” Raab said, suggesting that the whole plan could be dropped if vaccine uptake increases over the next two months.

But the newly inked contracts seem to be sending mixed messages about the government’s intentions for the controversial health certificate. A spokesperson for the health department insisted back in June that the NHS app used to certify vaccination status would not be used as a national ID system, describing the scheme as a “simple and secure means” to allow for international travel.
#Dominic Raab  #COVID-19  #vaccine  #Covid  #Raab
Add Comment