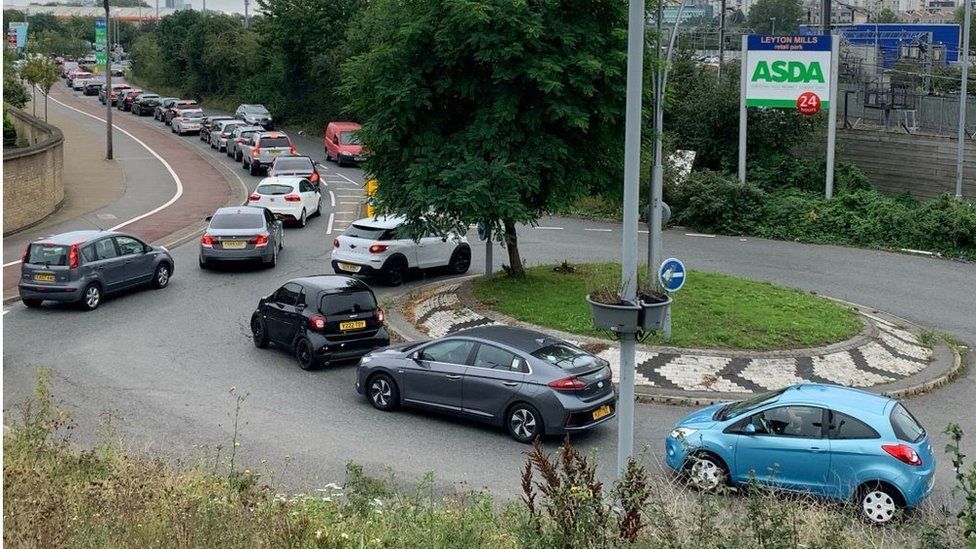 There has been no improvement in petrol supplies at independent petrol stations since Wednesday, according to industry body the Petrol Retailers Association.

The PRA, which represents independent fuel retailers, said that more than a quarter (27%) of its members' were still out of fuel on Thursday.

That was better than the 37% which were out of fuel on Tuesday, but demand remained higher than usual, it said.

However the AA said it saw signs that the pressure was starting to ease.

The PRA, which represents nearly 5,500 of the UK's 8,300 petrol stations, said Thursday's figures were based on responses from 1,500 stations.

"Trying to calm this down appears to be a monumental task at the moment," said PRA chairman Brian Madderson.

"The surge in demand appears to be continuing," he said. "There's been no easing off of the pressure from drivers wanting to refuel whenever they can, wherever they can."

The UK has been grappling with a fuel crisis that has caused huge queues outside some petrol stations, and forced customers to drive round multiple sites in search of supplies.

While the government and industry said there was enough fuel at UK refineries, a shortage of drivers has slowed the transport of fuel to petrol stations.

The government said it was seeing the "first signs" of demand for fuel stabilising, and stressed there was no shortage of fuel.

The AA also said it saw signs that the pressure on fuel pumps was starting to ease.

The motoring group said that the number of call-outs from drivers who had run out of fuel had initially increased sharply and was "in the hundreds" over the weekend. But it said those numbers were now falling rapidly.

Although some queues remain in London, the South East and some other built-up areas, AA president Edmund King said daily improvements were now visible.

"We believe we have turned the corner," he said.

The PRA told the BBC that it had also received "anecdotal" evidence that the problems were more acute in London and the South East. It said that Scotland, Northern Ireland and Wales appeared to be "mostly ok".

The PRA's Mr Madderson said he had written to the government this morning to warn them that the price of petrol and diesel at the pump was likely to rise, after a rise in the price of Brent Crude oil. A fall in the value of the pound against the dollar would also push up prices for UK customers, he said.

"Those two [factors] have already started to impinge on wholesale prices, which have gone up - in the last three nights - by nearly 3p a litre," he said.

Government plans to use the army to address some of the delivery problems in the coming days would help to ease the problems, Mr Madderson said, but the main thing that was required was a change in public behaviour.

"Let's just try and calm it down please," he said.

He said he understood that the army could be helping with deliveries by the weekend.

The majority of sites completely out of stock were BP franchisees, Mr Madderson said, adding the PRA was talking to BP about the issues they were facing.

BP told the BBC it was "working flat out to keep our petrol stations stocked and restock them when they run out". 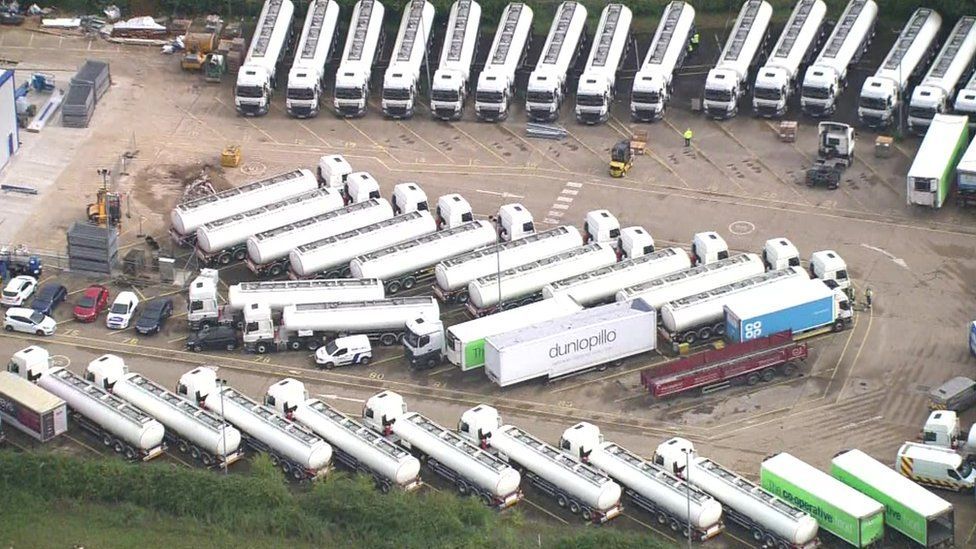 Long queues and frustrated customers have led to multiple reports on social media of abuse of service station staff.

BBC broadcast engineer Simon Hardwick tweeted: "Chatting with a member of staff at a supermarket petrol station, who said they are getting deliveries but within a few hours they sell out again. He also mentioned the abuse he's been receiving from members of the public."

Industry leaders have condemned physical and verbal abuse suffered by service station employees during the crisis.

Gordon Balmer, the executive director of the PRA, said the abuse was "completely unacceptable".

"It is important to remember that fuel stocks remain normal at refineries and terminals, and deliveries have been reduced solely due to the shortage of HGV drivers", he added.

The haulage industry said an existing shortage of lorry drivers had been made worse by a number of factors, including the pandemic, Brexit, an ageing workforce, and low wages and poor working conditions.

In an attempt to limit disruption, the government has confirmed that 5,000 fuel tanker and food lorry drivers can receive temporary UK visas, with the scheme ending on Christmas Eve.

The Road Haulage Association said, however, the recent move "barely scratches the surface", adding that only offering visas until Christmas Eve "will not be enough for companies or the drivers themselves to be attractive".

A spokesman for the government said it had taken "immediate action" to increase the numbers of HGV drivers.

"We recognise the challenges facing industry and streamlined the testing process in July to boost the number of drivers," he added.

Meanwhile, petrol station group EG said its workers would get a 5% pay rise for "heroic" work since the start of the Covid pandemic.

The wage increase takes the minimum rate for over-18s to £9.50 per hour at EG Group, which was founded by the Asda-owning Issa brothers.

Mohsin and Zuber Issa, the billionaire co-founders and co-chief executives of the group, said: "Our colleagues have pulled out all the stops and been nothing short of heroic during often very difficult times since the start of the pandemic.

"It is due to their hard work and dedication that EG has continued to be a growth business, performing strongly over the past 12 months.

"We are grateful to each and every one of them for their contributions and are therefore making a total reward package available to them which we believe is among the best in the country."